During March of 1933 Jussi Björling was busy at the Stockholm Opera, but he also had time to make gramophone recordings.

The work that totally dominated that month at the Opera was Aleksandr Borodin’s Prince Igor, which had its Stockholm premiere on the 11th and was given seven more times during the month. The second performance, on the 13th, was also broadcast on the radio.

Premiere poster for Prince Igor. Click on it to read text. 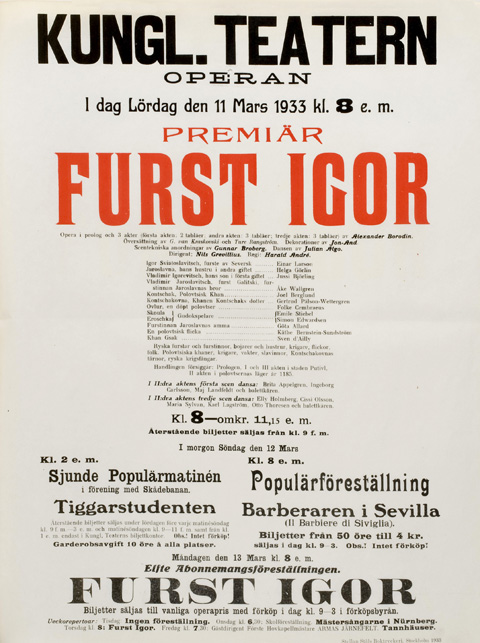 The opera, probably best known for the Polovtsian dances, deals with the campaign that Prince Igor, from a city in present-day Ukraine, waged in the 12th century against the Polovtsian people.  (The opera could be seen in a fine Metropolitan production which was digitally broadcast to movie theaters around the world a couple of years ago). Jussi appeared as Vladimir Igorevich, son of Prince Igor (Einar Larson), both taken prisoner by the Polovtsians. Vladimir and Konchakovna (Gertrud Pålson-Wettergren), the daughter of the Polovtsian khan Konchak (Joel Berglund), fall in love during his captivity. Vladimir sings his cavatina in the enemy camp. 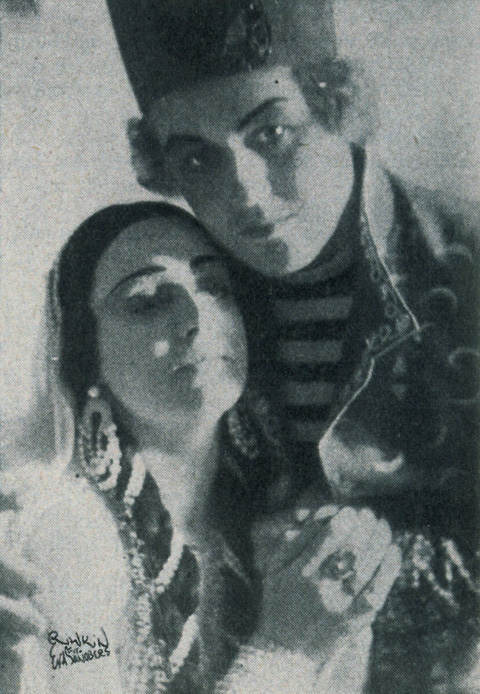 The production was well received, with praise for conductor Nils Grevillius and director Harald André as well as for the leading singers. Jussi Björling’s singing got only positive comments, and the opera would actually be among his most frequently sung. 36 performances up to 1937 means that Prince Igor was the 8th of his operas in order of number of performances. 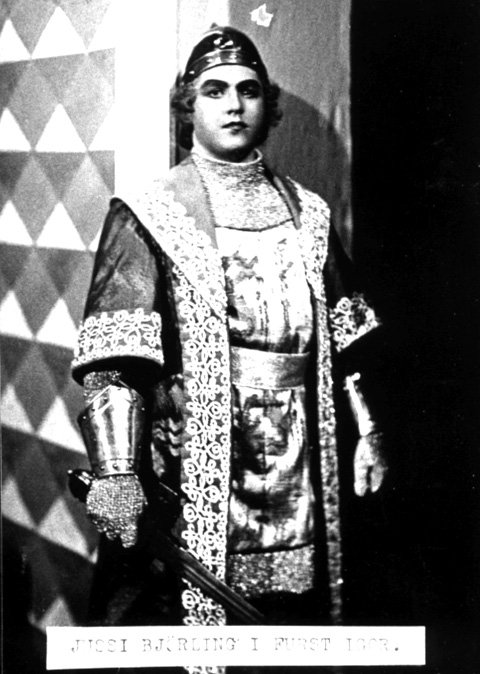 ”He sang so extraordinarily that one had even to forgive him when he abandoned his father and fatherland for the enchanting Konchakovna’s sake,” wrote Moses Pergament in Svenska Dagbladet. The newspaper opined that he “sang divinely, he has seldom sounded so good—though he always sounds good.” In addition, the paper went on, “he had found an ease on stage which was a pleasure to note.” On the first point, but not on the other, Dagens Nyheter agreed, writing about “Jussi Björling’s unusually good-sounding and clumsy Vladimir.” Even a Gothenburg paper was there, which agreed that “Jussi Björling’s tenor had seldom sounded as rich as in the second act’s delicious aria.”

Although the broadcast was not preserved, we can know the reason for such reviews fairly well. The same month, Jussi recorded his aria, and with the same conductor as at the Opera, Nils Grevillius.

For lyrics in Swedish and in English translation, click here

Jussi kept the Prince Igor aria in his repertoire all of his life, always in Swedish. He made another studio recording of it in 1957 and a Gröna Lund recording from July of 1960 has also been issued.

Besides the Prince Igor performances Jussi appeared twice more at the Opera during March 1933: in Barber of Seville the 12th and in Beethoven’s Missa Solemnis the 26th (the day of Beethoven’s death). The Beethoven mass and Handel’s Messiah (the latter given in the cathedral) were in Jussi’s repertoire when he was under contract with the Stockholm Opera, and both were conducted by Tullio Voghera. The other soloists in 1933 were Ruth Althén, Elsa Larcén and Joel Berglund, and “better soloists are probably seldom heard in a choral work,” as Kurt Atterberg wrote in Stockholms-Tidningen. He also gave high praise to Voghera, “this excellent coach of our opera chorus.”

Adrian Dahl’s Bachanal was another of Jussi’s recordings under Grevillius in March of 1933. The exact date for this song, like for the cavatina and several other of his early recordings, is unknown because only the month was noted in the recording ledgers. For some reason, HMV did not approve the recording, but had Jussi re-record it later in the same year with Hjalmar Meissner, and that is the version which was issued on 78. Here we can hear the “original” taken from Bluebell ABCD 016, where it was issued in 1988 for the first time.

For lyrics in Swedish and in English translation, click here