The Jussi Björling Society’s summer concert at Kungsträdgården (Royal Garden) this year took place on Thursday 25 July at 1.15 p.m. It was a lovely day with sunshine and warmth, perhaps too hot for the singers I thought, when the temperature rose to +29° C. Fairly early the audience began to come flocking, and when concert time was approaching it was so crowded that more chairs and benches had to be carried in. Before the programme proper began, we listened to two Jussi Björling recording, first the duet “Solenne in quest’ora” from Verdi’s The Force of Destiny together with Robert Merrill, and after that Jussi on his own in Tosti’s ”L’alba separa dalla luce l’ombra”.

Now we were in the right mood and it was time for the concert to begin. Stefan Olmårs, secretary of the Jussi Björling Society and compère of the day, entered the stage and welcomed everybody to the lunchtime concert. 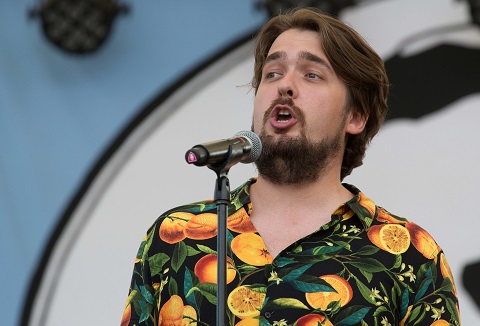 
Anders Wadenberg, the accompanist of the day.

In the first part of the concert Bengt opened with Idabelle Firestone’s “If I could tell you” followed by Per in “Tonerna”. After this gentle start it was time for operatic repertoire in the shape of Verdi’s “Sortita d’Amonasro” from Aïda with Bengt and ”La mia letizia infondere” from Verdi’s I Lombardi with Per. This was a good start and several other visitors in Kungsträdgården payed attention and moved towards the stage.

Also the second part of the concert contained a fine mix of ballads and opera. Bengt answered for the former genre and had chosen Anders Fryxell’s “Ack Värmeland du sköna”, based on a Swedich folk tune, and Evert Taube’s wonderful “Min älskling, du är som en ros” (My love is like a red, red rose). I rejoiced at Bengt’s ability to make the texts come alive with his warm baritone. Per had in the operatic genre chosen the arias “En fermant les yeux” from Massenet’s Manon and “E lucevan le stele” from Puccini’s Tosca, and his brilliant top notes impressed.

The third part of the concert opened with Bengt in a sensitive reading of Rangström’s quiet “Villemo” (text from August Strindberg’s Visor). But then it was opera again. Per sang from Puccini’s La Bohème Rodolfo’s well-known aria “Che gelida manina”, the beautiful declaration of love to Mimì, with a fine high C, and after that, together with Bengt, from the same opera the duet “O Mimì, tu più non torni”. The voices were excellently matched, and Bengt then rounded off with Stanislao Gastaldon’s grand “Musica proibita”. 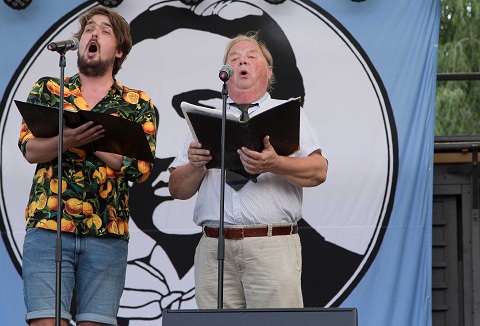 As an appreciated encore Per and Bengt treated us to the well-known duet ”Au fond du temple saint” from Bizet’s Les Pêcheurs de Perles”, and thanks to Stefan Olmårs’ excellent timing as compère the concert ended practically on time. Pianist Anders Wadenberg is worthy of great praise for his flexible and pliable accompaniment throughout the concert. And exactly as at the beginning of the concert we afterwards listened to two Jussi Björling recordings, this time first the aria “Song of India” from Rimsky-Korsakov’s opera Sadko and after that Guy d’Hardelot’s well-known song “Because”. With Jussi’s voice still sounding in our ears we then wandered out in a very hot Stockholm.