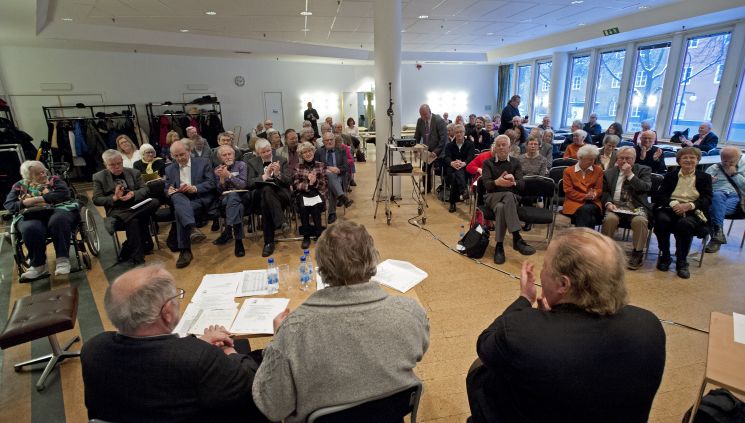 IN THE PRECENCE OF 72 MEMBERS The Jussi Björling Society’s 25th annual meeting was held in Stockholm, followed by a party and entertainment, on Saturday 1 February 2014.

The Slightly Rejuvenated Board

The board announced that the recipient of The Jussi Björling Society’s Prize 2014 is tenor Daniel Johansson, who will be presented with the prize at the Jussi Björling Day, taking place at Skansen on 9 August 2014.

Bertil Bengtsson, one of the founding fathers og the Society, was elected honorary member for his achievements to keep the memory of Jussi alive.

The new international English-language website was introduced and is available on-line from 31 January 2014. 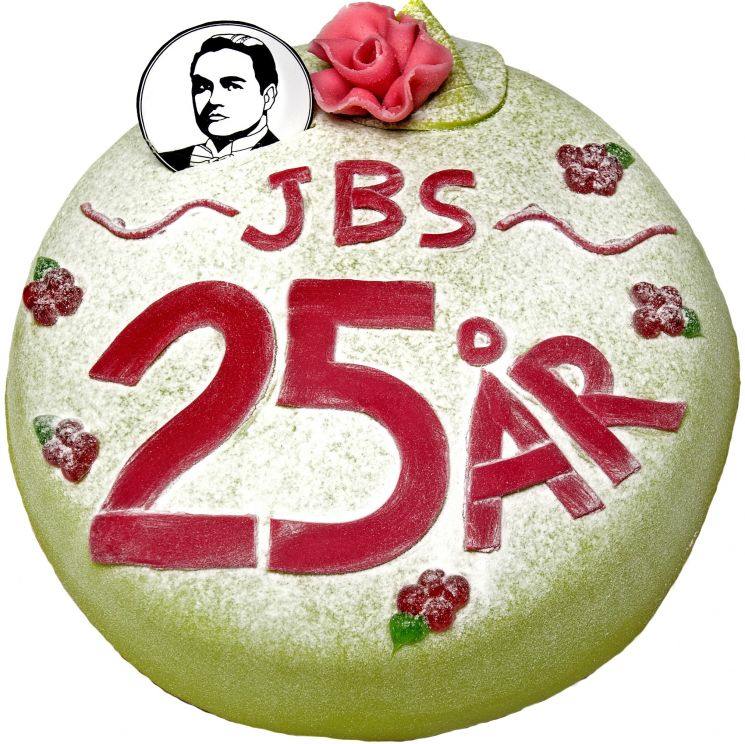 In connection with the annual meeting on 1 February 2014 the Society celebrated its 25th Anniversary by treating the members to coffee and cake and entertainment, compered by Stefan Olmårs.

The singers Bengt Krantz, baritone (left) and Ulrik Quale, tenor, rehearsing with their accompanist Anders Wadenberg. Bengt is also Chairman of the Society.

The entertainment was opened with two filmed excerpts with Jussi, If I Could Tell You by Mrs I. Firestone and Was ist Sylvia by Franz Schubert. The excerpts were from the DVD Voice of Firestone. Jussi Björling in Opera and Song, recorded 20 November 1950.

Harald Henrysson and Bertil Bengtsson, two of the founders of the Society, told the interesting story of the proceedings when the Society was established on 7 January 1989 at Anna-Lisa Björling’s home, Karlavägen 11, in Stockholm. Those present were Bertil Bengtsson, John-Erik Eleby, Frank Hedman, Lars Hemmingsson and Harald Henrysson. They were the real founders. Present on the occasion were also Anna-Lisa Björling-Barkman and Ulf Barkman as well as Lars Björling.

The very first member meeting took place on 5 June 1989 at Adolf Fredrik School in Stockholm. The number of members during this first year was 55 and the membership fee was 60 SEK.

Bertil’s strongest memory from the first 25 years of the Society’s history is from 14 June 1992 when the members visited Jussi’s beloved Siarö, arranged by Lars Björling. The members made a tour of the house, guided by Lars. An unforgettable experience for those present.

Harald Henrysson and Bertil Bengtsson, two of the founders of Society

Invited artists were Bengt Krantz, baritone, Ulrik Qvale, tenor and the accompanist Anders Wadenberg. Bengt opened with Holberg’s (Renato’s) aria from Un ballo in maschera by Verdi. Ulrik Qvale continued with Sommarnatt by Schrader and Anders Wadenberg rounded off the first act with a nocturne by Chopin. 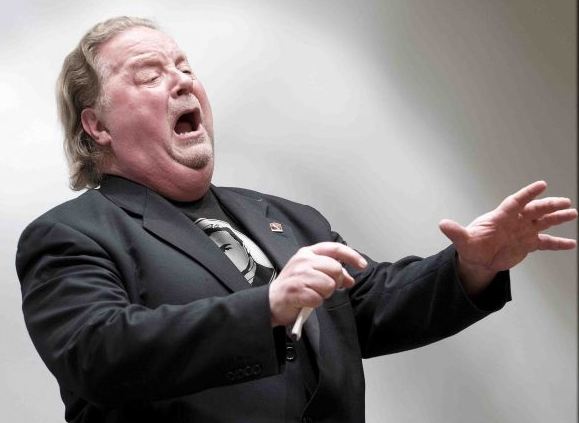 Ulrik Qvale continued with Sommarnatt by Schrader and Anders Wadenberg rounded off the first act with a nocturne by Chopin.

Bengt and Ulrik got together in the finale, a medley consisting of ‘O sole mio and Till Havs. 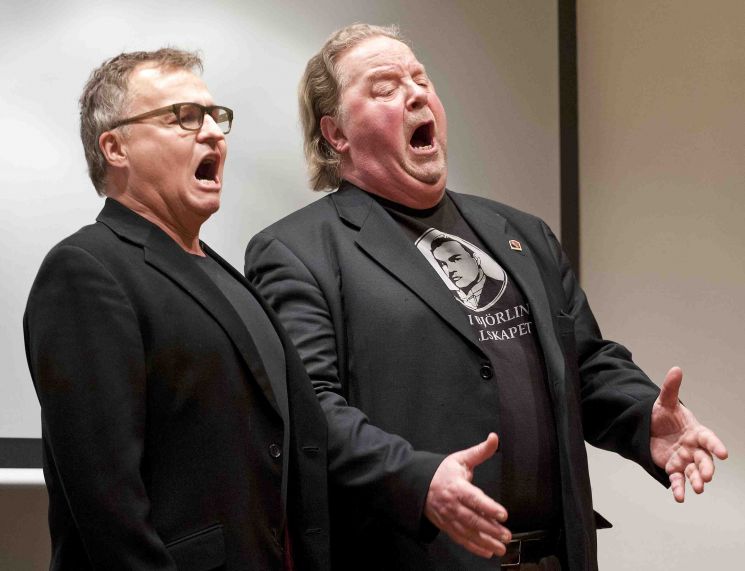 Bengt and Ulrik got together in the finale, a medley consisting of ‘O sole mio and Till Havs.

There were flowers to the artists and Bengt Krantz finished off the party by saying ‘Thank You’ to the audience and those who had participated. The last word was, rightly, given to Jussi who, in a filmed sequence, sang  In my garden by Mrs Firestone.

Listen to the Artists Singing at the Party!

As en extra service to those of you who were not able to be present at the party or want to revive the live performances, the links below will give you five musical numbers with a total playing time of 19 minutes, all recorded on location on 1 February 2014 by Pelle Jansson.