This text is in the main based on an article by our member Jan Sterner, previously published in the Jussi Björling Society membership paper No. 11, September 1994 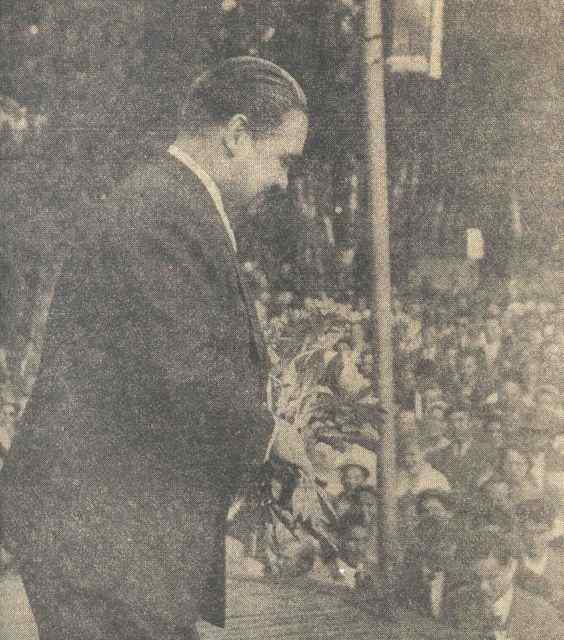 75 YEARS AGO, ON 6 AUGUST 1939, Jussi gave his first concert in the Furuvik Park. For this reason we want to pay attention to his unforgettable appearances in Furuvik, where he carried through nine concerts between 1939 and 1956. Click below to listen to two unique sound recordings from his first concert in Furuvik 1939, and a film, without sound, from the same occasion.

THE FURUVIK PARK is an animal- and amusement park, situated about ten kilometres east of Gävle and about 170 kilometres north of Stockholm. The park was inaugurated in 1900 and on the major outdoor stage many famous artists have appeared through the years, for instance Josephine Baker, Louis Armstrong, Sammy Davis Jr and Jussi Björling. 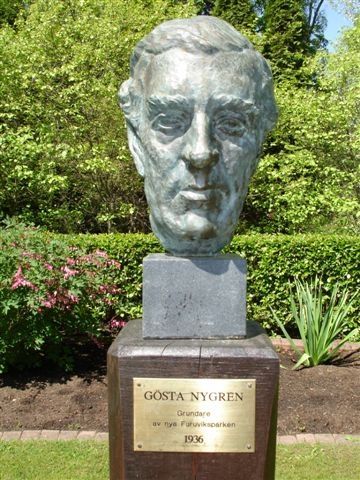 WHEN THE FURUVIK PARK WAS RE-INAUGURATED IN 1936 under the new owner Gösta Nygren, he ventured on famous vocal artists and it was a clever move to engage Jussi who would attract large audiences. At the first concert on 6 August 1939 there were 20,000 people in the audience. In 1952 he cut the record with 22,000, which was to last until 2013. Often he made two appearances the same day with a few hours’ interval. He was to make nine concerts in Furuvik between 1939 and 1956.

The audiences in the Furuvik Park loved Jussi and this was no doubt a requited love. The listeners were completely silent and attentive when he sang. Through his enormously beautiful voice and his simple and natural manners he caught also people who otherwise had no interest in classical music. Click below to see some very unique film footage with Jussi and listen to two sound-clips with Jussi in Furuvik on 6 August 1939.

The stage in Furuvik of today

Jussi liked outdoor concerts and the contact he got with the broad mass of the people. He was also folksy in the sense that he was able to socialize with people from all classes. The environment in Furuvik with closeness to nature, with the sea nearby, old buildings, animals, amusement park etc. appealed to him. Moreover he got on well with the Nygren family, owner of the Furuvik Park.

On 22 July 1956 Jussi arrived in Furuvik for the ninth and last time and carried through a much acclaimed concert before 15,000 listeners. Jussi was late and after ca 20 minutes a taxi drove through the crowd up to the stage and Jussi stepped out in matching blue gabardine suit, light blue shirt and brightly coloured tie, together with his wife Anna-Lisa and his daughter Ann-Charlotte.

He was sunburned, looked the very picture of health and came probably thoroughly rested from his dear Siarö. The owner of Furuvik, Gösta Nygren, had passed away in 1954 and now it was his son Lars who greeted Jussi.

Jussi did two concerts this day and opened by saying: “It’s Mozart Anniversary this year (Mozart was born in 1756) so I’ll start with the aria Dies Bildnis ist bezaubernd schön from The Magic Flute”. Then followed Bland skogens höga furustammar and När jag för mig själv i mörka skogen går by Peterson-Berger, Vår by Hildach, Var det en dröm by Sibelius, M’appari tutt’amor from Martha by Flotow, Trollsjön by August Söderman, Because by d’Hardelot, Mattinata by Leoncavallo, Torna a Surriento by De Curtis, Celeste Aïda by Verdi, Nu är jag pank och fågelfri by Millöcker and finished with Land du välsignade by Althén. 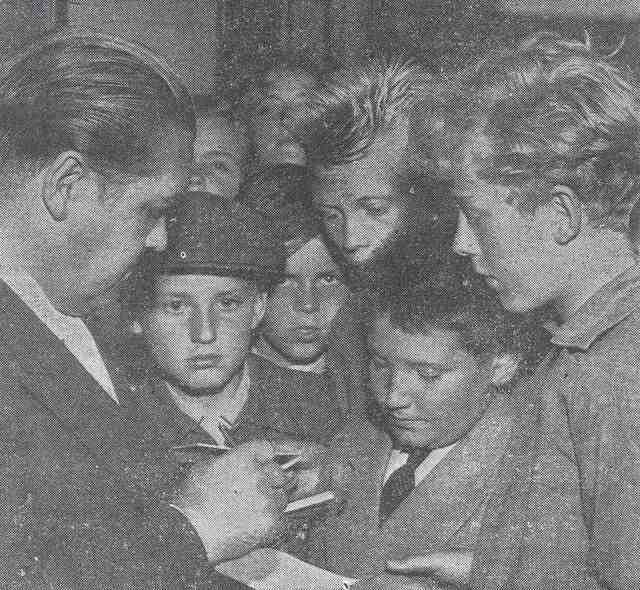 Jussi wrote about one hundred autographs, which underlines that he was in good spirits, since this was otherwise not something he exactly loved. After the concert he visited a wedding party at Kaptensgården in Furuvik, and congratulated the newlyweds, which of course was appreciated.

Just before the second concert Jan Sterner (the writer of the original article) met Jussi and his accompanist Harry Ebert, walking through the park, laughing and joking with each other. Also during the concert Jussi often smiled. Lars Nygren observed before the second that the first concert had been a great success and now it would be the same. “Knock on wood. We’ll see”, Jussi said and knocked on the lid of the grand. The listeners now literally formed an ocean and he was even better than in the first concert. The ovations were enormous and Jussi gave Lajla Lilja, sister of Lars Nygren, a hug after the floral tribute.

“15,000 cheering listeners applauded, threw hats up in the air and waved with hankies. In other words it was a terrific success for Jussi in top shape … Furuvik is happy with Jussi and he with Furuvik.”

After the concerts Jussi and his family, the Nygren family, and Gevalia (a Swedish coffee producer) manager Sven Engwall and his family, usually dined together. This often happened at Hotel CH in Gävle or Restaurant Tyrol in Furuvik, which was more intimate, something that Jussi liked.

The Nygren family say that Jussi was amiable, happy and talkative, told stories etc. Apart from drinking-songs he didn’t sing at the dinners. He wanted to relax after the concerts.

In 1956 Furuvik celebrated 20-year-anniversary under the aegis of the Nygren family and two new chimpanzees were named “Sussi and Jussi”. Jussi probably didn’t mind to have an ape named after him. He had a sense of humour and didn’t take himself too seriously.

1957 Jussi had signed a contract with Lars Nygren for two concerts on 21 July. He had finished a recording of Puccini’s Tosca in Rome on 18 July and had probably overworked himself there. Jussi informed Nygren on short notice that he was ill and unable to come. As late as 20 July the concerts were advertised in the local papers. 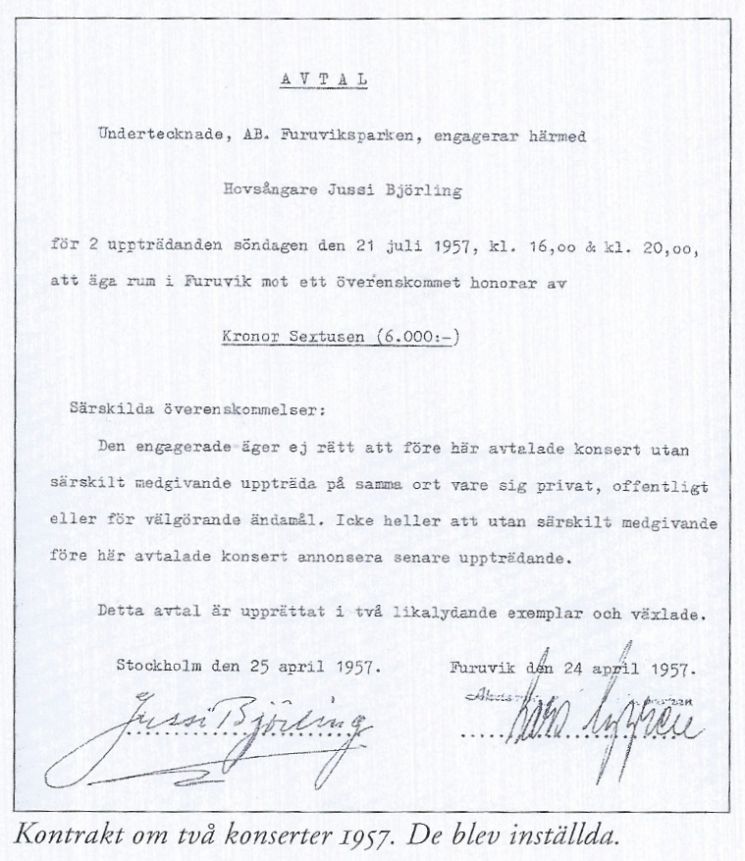 Translation of the contract:

We, the undersigned, The Furuvik Park Inc. with this engage

To take place in Furuvik against a fee agreed upon of

This contract is drawn up in two identical copies and exchanged

Contract for two concerts 1957. They were cancelled. That there were no further concerts in Furuvik was due to Jussi being so heavily booked.

Watch a unique film and listen to sound recording with Jussi.

Here you can watch a unique film sequence (without sound) filmed by Anders Nyberg, with Jussi in Furuvik in 1939. Enter the film after 24:40 min. and you will find the snippet with Jussi.

Also listen to two very unique sound recordings made by Anders Nyberg in Furuvik on 6 August 1939. It was recorded on equipment Nyberg had constructed himself and contains the two final numbers in the concert. The recording was approved by Jussi immediately after the concert. The sound quality is not the very best but still worth hearing.