Jussi on the Solliden stage of Skansen at his very last concert on 20 August 1960. 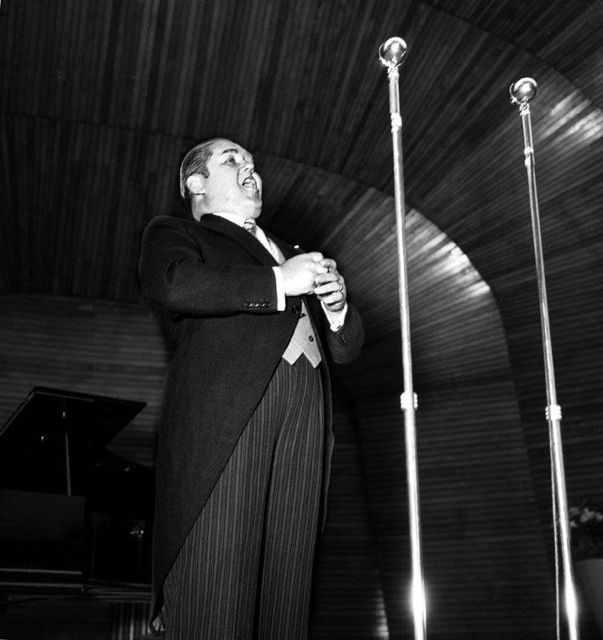 Jussi appeared 52 times on the Solliden stage at Skansen, which was one of his absolute favourite stages. His concerts at Skansen and Gröna Lund in Stockholm were institutions in summertime for many years. And it was on the Solliden stage he gave his very last concert on 20 August 1960. A few weeks later he died from a heart attack at his beloved Siarö.

The Skansen producer Simon Törnqvist greeted the audience to this year’s Jussi Björling Concert, a cooperation between the Jussi Björling Society and Skansen, now held for the fourth consecutive year.

A World Tenor-to-be for the First Time in Sweden.

The tenor Ramè Lahaj from Kosovo posing at the Skansen escalator on his way to the sound-check.

Ramè Lahaj, born in Kosovo. Not until he was 21 did he start studying music and he graduated in 2008 at the Academy of Fine Arts in Tirana, Albania, as the best student of the year. He made his operatic debut in 2010 in La traviata at the Eutin Festival in Germany and the same year he won two singing competitions in Italy, among them as the best singer of Neapolitan songs.

His first great success was in Macbeth in Budapest in 2011. He has sung Alfredo in, among other places, Dortmund, Montpellier and Royal Albert Hall and also appeared in Rigoletto in Palermo, Salzburg, Berlin and Brussels. During the 2014-2015 season he will appear in a number of big opera houses.

This was Ramè Lahaj’s first visit to Sweden and the audience were treated to well-known numbers like La donna è mobile from Rigoletto by Verdi, Caruso by L. Dalla and Core ‘ngrato by S. Cardillo.

Lahaj finished with the show-piece Nessun dorma from Turandot by Puccini. This aria was dedicated to Jussi’s daughter Ann-Charlotte Björling who was present in the audience.

Tenor Daniel Johansson received the Prize of the Jussi Björling Society for 2014.

The Chairman of the Jussi Björling Society reading the statement of motives for the prize.

This year’s prize from the Jussi Björling Society was awarded to tenor Daniel Johansson. The prize sum was this year raised to SEK 30,000. In addition Daniel received a crystal vase with the inscription Daniel Johansson – an utterly attractive and useful tenor – bright and euphonious and Jacob Forsell’s book about Jussi.

Daniel Johansson from Braås in Småland

Daniel Johansson is one of the most interesting young singers of today and has studied at the University College of Opera in Stockholm. He has already sung several roles, like La traviata in Geneva, Die Zauberflöte in Valencia and Die Fledermaus and Salome in Oslo. At the Royal Opera in Stockholm he has taken part in La bohème and Die Zauberflöte and in Chautaqua in USA he was Lensky in Eugene Onegin.

Daniel has received several prizes and during the concert at Skansen he received the prize of the Jussi Björling Society.

Daniel will take part in the Jussi Festival at Strömsbruk, Saturday 6 September 2014.

Soprano Ingrid Berg from Gothenburg obtained her Bachelor’s degree at the Royal Academy of Music and will begin her Masters education this autumn.

Tenor Markus Pettersson from Hälsingland will this autumn begin his final year of the Masters programme at the University College of Opera.

Markus sang the Sailor’s song from Un ballo in maschera by Verdi and Sommarnatt by Schrader. Together Ingrid Berg and Markus Pettersson performed the duet Lippen schweigen from Die lustige Witwe by Franz Lehár.

Compère Sixten Nordström in conversation with Victoria Power, who accompanied all the singers. She made her debut as pianist in 1991 as the young Mozart at Confidencen. She has toured Europe and USA, made CD recordings and been soloist with the Swedish Radio Symphony Orchestra.

Sixten Nordström is best known to wider Nordic audiences as compère of the music quiz Kontrapunkt (Counterpoint) on Swedish television 1985 – 1998).