As usual, Jussi Björling spent July 1960 mainly on Siarö, but besides two concerts in other parts of Sweden, his activity as a recording artist – since 1920! - had a very sad ending in Rome that month.

The first of the Swedish concerts was part of quite an unusual event. On the 4th of July, American Independence Day, Jussi had already sung in 1948 and 1954, but then at Skansen. In 1960 it was decided to have the official celebration for the first time outside Stockholm, in Dalarna. This was the province which many Americans regarded as most “Swedish” and where Jussi also happened to be born and have spent his early years. Maybe he therefore felt especially willing to participate. On his way back to Siarö he took the opportunity to visit Stora Tuna Church and the churchyard, where his brother Gösta had been buried three years earlier.

Rättvik’s ”people’s park” had been selected for that event, and Americans who wanted to take part were invited to come to Gettorget (“Goat Square”) in the village of Gärdebyn and to climb into horse carriages decorated with flowers and leaves to travel on “one of Sweden’s most scenic roads with a wide view over Lake Siljan glowing with the rays of the setting sun”, led by folk fiddlers in local costume through an avenue of spectators to the “people’s park.” There almost 2,000 people waited and there would certainly have been more had there not been a rain shower interfering with the program.

After speeches by representatives of local government and tourist offices and an American Embassy Secretary, the extensive music program began. Besides Jussi, it included a performance by the Royal Opera ballet together with the Royal Orchestra. Jussi’s program was mainly Nordic, with Kung Heimer och Aslög, Jungfrun under lind, Grieg’s En drøm and Eklöf’s Morgon, but he also sang Because in English as well as the American composer Oley Speaks’ Sylvia. Three floral bouquets were Jussi’s visible reward, besides the audience “stamping the ground, whistling and cheering, quite in American style.” 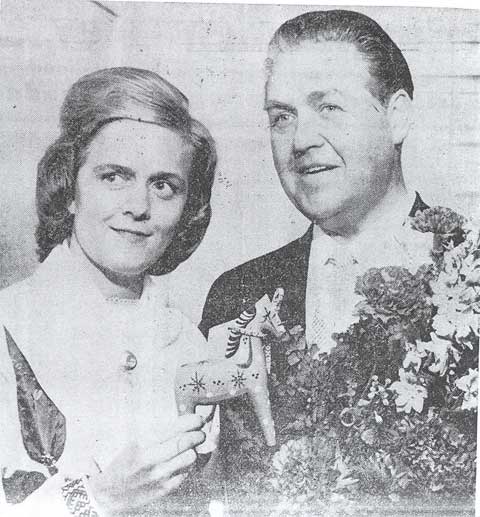 Jussi receiving flowers and a Dala horse after his concert

Among the guests was also the broadcaster Anthony Baird from ”Sweden Calling All Tourists,” who later found the opportunity to make the interview we can hear below.

Four days after the event in Rättvik, Jussi went together with Anna-Lisa and Ann-Charlotte to Rome to make a complete recording of Verdi’s Ballo in maschera for the Decca/London company. Jussi had once studied the opera with Toscanini for a radio broadcast but been forced to cancel due to voice problems. Opposite Jussi’s Riccardo (Gustavus III of Sweden in the original version), Birgit Nilsson would sing Amelia, and the conductor was Georg Solti, with whom Jussi had earlier cooperated without any problems. Jussi suffered from his heart illness in the Roman heat and wanted to restrict the rehearsals. Solti proved to have quite a different musical conception of Riccardo’s role, something he wanted to force through in a brusque manner, and the producer John Culshaw gave him the – according to other present, quite misleading – impression that Jussi was drinking. All this led to a clash, and although Jussi later declared himself willing to yield to Solti’s wishes, the latter cancelled the recording. Thus, there is no studio recording of Jussi in one of his best roles, but we can still enjoy two live recordings of him as Riccardo/Gustavus. On July 15, a depressed Jussi left for Sweden with his wife and daughter.

Jussi’s mood is mirrored in this photo from a recording session in Rome. The soprano is Sylvia Stahlman, who sang Oscar. 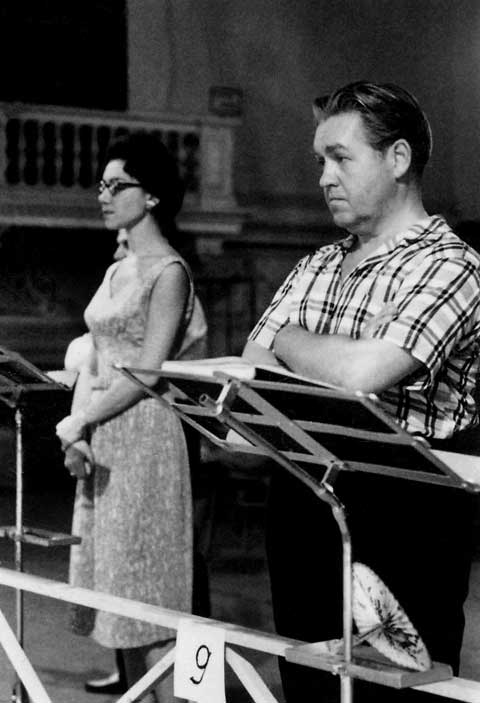 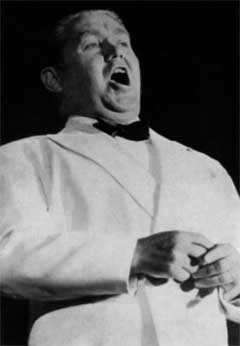 Jussi at Gröna Lund, July 28
In the Summer of 1960, Jussi Björling had sung at Gröna Lund already on June 9, but that was as a participant in a concert of the Royal Opera Soloists, of which he was made an honorary member. On July 28 he returned with a traditional recital of his own accompanied by Bertil Bokstedt. Relaxed and smiling in his white dinner jacket he stood on the stage and nobody would think it could be the last time he would appear there. A columnist known as Barbara tried to describe his special position on this stage:

“No time that has passed has changed his position. He is steadfastly anchored among a public from all parts of society and all ages and although he is now not heard very frequently he is not forgotten like so many others. When he appeared at 'Grönan' Thursday evening, every space was filled. Old ladies and gentlemen, teenagers, young fathers and mothers with kids on their shoulders, were packed in rain gear.”

But the threatened rain didn’t come, and Barbara described the recital and the atmosphere: ”Jussi began with August Söderman’s Trollsjön, and the first roses were handed over. He continued with Prince Igor and another bouquet flew over the footlights, followed by powerful Swedish bravos. The flying bouquet was evidently a bribe for now Jussi sang 'by request' Ideale by Tosti. A woman stood behind me blew her nose for a long time and it would get worse.

’Because many have requested it I will now try to sing Till havs by Gustaf Nordqvist,’ said Jussi. The attempt went well and after the last notes he was met by loud cheering and appreciative whistles. However, this loud enthusiasm was changed into a long disappointed sigh when Jussi presented Land, du välsignade as his last number. Nobody wanted to believe or accept that. When Jussi sings 'thou blessed land, take my work……' he is all Swedish and magnificent. His powers are no longer such that he could as earlier be tempted to too much bravura, but the question is if his voice ever before sounded committed that that evening. It was no shame to blow one’s nose.

Then the last flowers arrived. The applause was thunderous and Jussi finished his concert again with Because. But there were no more finishes after that.”