Jussi of the Month February 2015

Jussi’s First and Only Stereo Recording in Sweden 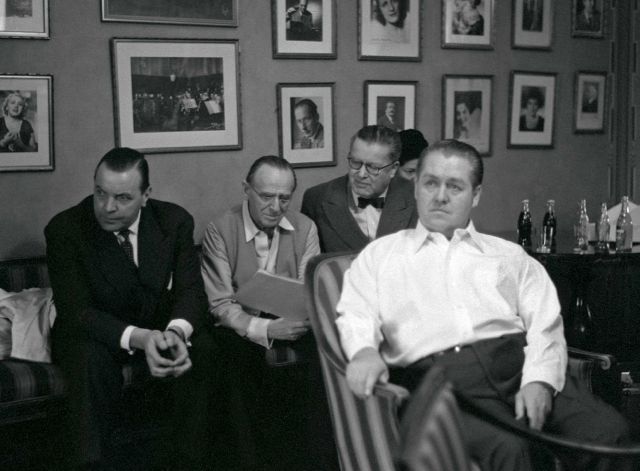 On 8 February 1959 Jussi made his first and only stereo recording in Sweden, a classic studio recording in the main hall of the Stockholm Concert Hall. For the first time in Sweden a three-track tape recorder was utilized. It was transported by air from the factory in the US for this particular occasion.

Jussi and Nils Grevillius in conversation

The recording with Jussi at the Stockholm Concert Hall on 8 February 1959 was the last studio recording he made in Sweden and the only one in stereo. Moreover it was the first time a three-channel tape recorder was used in Sweden. The recorder was transported direct from USA and arrived just in time for the recording. The record company RCA in the US demanded that their big tenor star should be recorded in stereo. 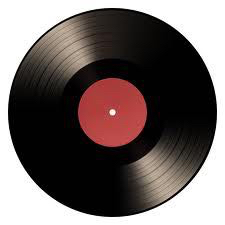 As early as the 1930s there were experiments in Germany and the US with stereo recordings. The problem was for a long time how to distribute these recordings to the consumers.

In the mid-1950s this problem had been solved and in 1958 the first LP-records in stereo were put on the market. At the same time Swedish Radio also started making certain recordings in stereo. The LP-record was launched in 1948 by Columbia Records, but the breakthrough was not until about 10 years later. During the period ca 1967 to 1987 the LP-record was the dominant carrier of music in the world. The first Swedish LP was released by Metronome in 1950.

In 1957 Jussi made his first recordings in true stereo in Italy, but his Swedish recordings the same year were still produced in mono and were later electronically processed to give stereo effect.

Time for Recording with the Three-Channel Equipment

Now was the time for the first use in Sweden of a three-channel tape recorder. The recording date was long planned to be Sunday 8 February 1959. Jussi was at home in Stockholm and was scheduled to sing in two performances of Tosca and Manon Lescaut at the Royal Opera on 12 and 15 February and then leave on 21 February for a US tour, comprising around twenty solo appearances until the end of April.

The recording was to take place in the Stockholm Concert Hall, without an audience, and the planned eight late-romantic songs were to be sung in Swedish in one day. 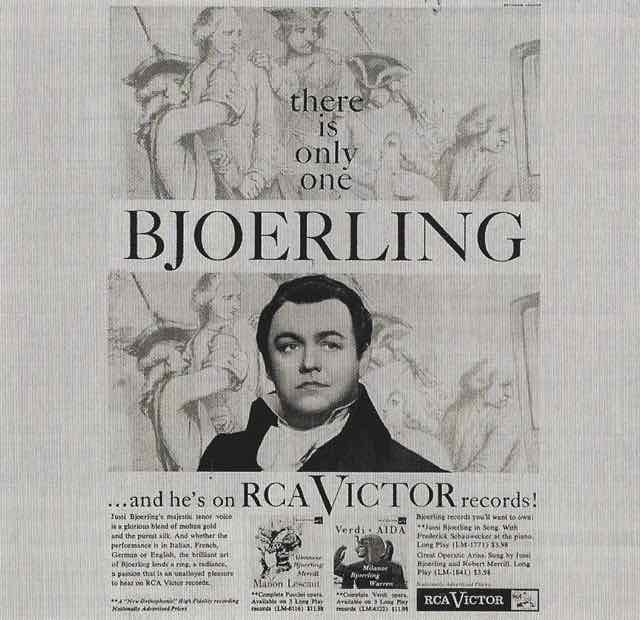 In Sweden RCA were represented by Grammofon AB Electra, who commissioned the recording to Europafilm, at that time owner of the foremost recording studio in Sweden, situated in Sundbyberg. This time, however, the recording equipment and technicians were transported to the Stockholm Concert Hall.

When the three-channel tape recorder, an Ampex 300-3, arrived by air from the US to Bromma Airport, four men with carriers and a truck were needed to transport three heavy tape recorders with separate amplifiers, mixer, microphones and loudspeakers to the Concert Hall.

To the right: part of an Ampex 300-3 stereo three-channel tape recorder similar to the one employed at the recording.

Two mono tape recorders were to be used as well as the enormous Ampex recorder of three separate units, needing space as wide as a dinner table. The chief technician of Europafilm, Bengt Runsten, was responsible for the mono recording, which was regarded as the most important, and his assistant Olle Swembel took care of the Ampex machine. Three microphones were rigged, strings to the left, double-basses and cellos to the right and Jussi in the middle. The technicians had one control room each, one for mono and one for stereo. 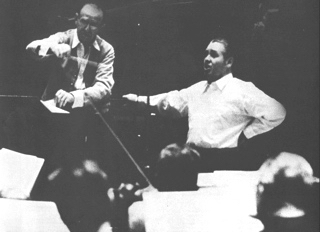 It was important for the technicians to be there well in advance to be ready when Jussi arrived. Usually he sang just half a song before it was time for recording.

Jussi arrived and was in top shape, ready for recording. Nils Grevillius gave the downbeat and Jussi sang the first notes but the three-channel machine didn’t start. 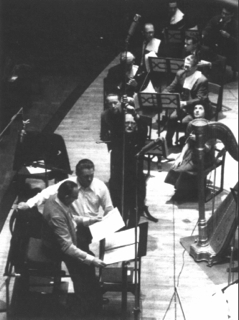 The tape recorder was hurriedly transported to Europafilm in Sundbyberg, where an out-of-order relay was substituted. In the meantime the recording session continued in mono and three songs were recorded: Trollsjön, Guds lov i naturen (Die Ehre Gottes in der Natur) and the classic Adam’s classic Cantique de Noël. That is the recording of Cantique de Noël which later became the classic recording always played at Christmas, at least in Scandinavia.

Only the mono recorders could be used, but later it turned out that one of them suffered from electrical disturbances, so only the recordings from one machine remained. For the afternoon session the Ampex equipment was back and the remaining five songs could be made in stereo: Demanten på marssnön, Säv, säv, susa, Aftonstämning, Så tag mit hjerte and Jag längtar dig.

Practically all the songs were recorded in one take, with only the odd re-take. It was during this session that Olle Swembel and Europafilm’s chief technician developed stereo technique of their own by placing three cardiod microphones left, right and in front of the conductor, approx. 2-2½ meters up in the air. This resulted in a powerful punchy sound with distinct stereo perspective.

Here Jussi is at the height of his art, or as Nils Grevillius expressed it at the time of his demise: “During all of my soon 50-year-long career as musician I have never heard anything so wonderful – the eternal beauty of the tone, his ability to nuance and phrase.”

Grevillius’s cooperation with Jussi lasted more than 30 years and they were planning to make around 20 re-recordings in stereo of Jussi’s old repertoire, scheduled for the beginning of 1961, enough to fill an LP. The plans were dashed to the ground when Jussi passed away on 9 September 1960.

All they managed was the songs they recorded at the Stockholm Concert Hall on 8 February 1959.

Three-Channel Tapes in Mothballs for 30 Years

After more than 30 years in mothballs in the archives of Swedish Radio the three-channel tapes could be restored, thanks to some technicians at Swedish Radio remembering that they had a three-channel tape recorder in a store-room in case of mobilization. Most three-channel machines disappeared or were scrapped when the multitrack recorders marched in during the second half of the 1960s.

For the first time in 1996 the recording could be transferred and edited direct from the original (master) three-channel tapes. Previous transfers, to LP as well as, CD, had been made from compressed LP masters, adjusted to the limited reproduction technique of the time. Often they were face-lifted with reverberation to mask differences in the recordings.

The result of the transfer was that the record company Swedish Society in 1996 was able to issue  the CD “De svenska tenorerna” (The Swedish Tenors): Jussi Björling, Nicolai Gedda and Gösta Winbergh. The five songs with Jussi are the stereo recordings from 8 February 1959. 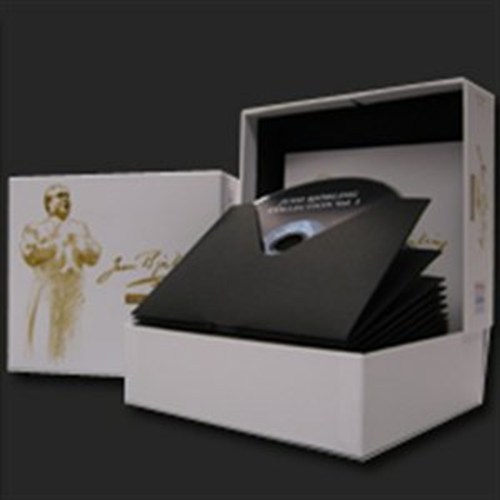 Experience a Few Minutes from the Recording Session 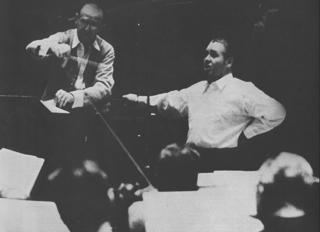 Let us now move back in time to 8 February 1959 by listening to a few minutes from take 1 when chief technician Bengt Runsten is counting to check the balance between the centre channel and the left and right channels – feel the presence with instruments being tuned, musicians chatting, technicians preparing the recording. Nils Grevillius beats the first bar, the Royal Orchestra opens with Säv, säv, susa and for once Jussi forgets the text. Only in Swedish!