Jussi of the Month December 2015

The Last appearances at the Metropolitan Opera

During November/December 1959 Jussi sang for the last time at the Metropolitan Opera in New York. It was a total of eight performances of Cavalleria rusticana, Tosca and Faust and finally a recital at Hunter College.

Jussi had been singing the title role in David Brook’s production of Faust in 1953, a production that had been dusted off on several occasions, last time in 1957 when Nicolai Gedda made his Metropolitan debut. 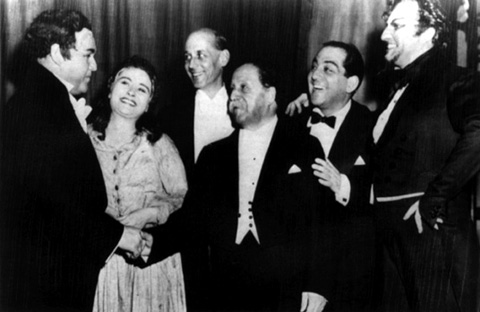 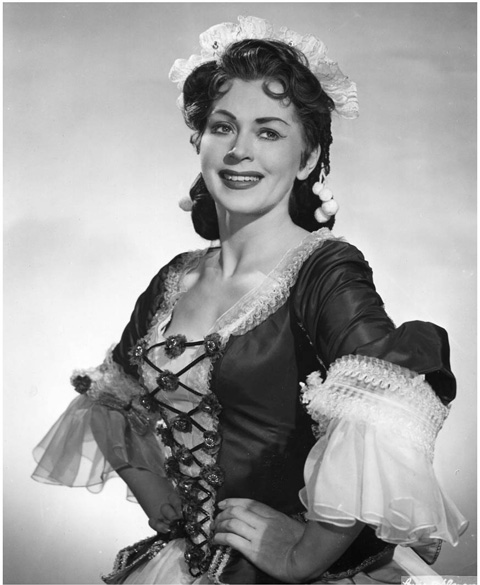 Elisabeth Söderström as Susanna 1959
On 8 December 1959 Jussi was back in the role after more than 2½ years absence from the Met, and at his side he then had Elisabeth Söderström, who some weeks earlier had made her Met debut as Susanna in Le nezze di Figaro. She had sung opposite Jussi before, in Manon Lescaut at the Royal Stockholm Opera. Then she was, as she relates in her autobiography I min tonart (“In My Key” Bonniers 1978, not available in English), very respectful “and I addressed him alternately ‘Mr Court Singer’ and ‘Mr Björling’, definitely not ‘Jussi’ … When we, after the last act, stood before the audience and received applause, I plucked up courage and whispered: ‘’Dear Mr Court Singer, may I address you ‘you’?. Whereupon Jussi in front of all the onlookers hugged me and answered: ‘Little girl, I’ve waited for this all evening!”

Next time she sang opposite him was at the Faust performance on 8 December. “It was with terror in my heart and on trembling legs that I walked to the theatre that evening: we had had only one run-through with orchestra and sets, I wasn’t sufficiently prepared. I bewailed my distress to Jussi, who looked at me with compassion and answered: ‘Little friend, you have nothing to be afraid of, there aren’t many who demand much of you yet. It is much worse for me; everybody expects to find out whether I am finished or whether I can live up to my reputation!”

The production as such was a write-off, according to both John Briggs of The New York Times and Jay S. Harrison of The New York Herald Tribune. The former wrote: “Transporting Faust, most medieval of operas, into the nineteenth century is a parody idea worthy of Gilbert and Sullivan”, while the latter designated Brook’s production as “one of the silliest in the company’s repertoire”.

As for the musical side their opinions were wide apart. Briggs thought that “Last night, however, there were compensations in the form of a uniformly strong cast, all in good voice. Especially Elisabeth Söderström’s first Marguerite with the company. Miss Söderström has a dark-textured voice of marked individuality, with wide compass and good carrying power. Marguerite’s music lies comfortably within her range. She ended a brilliant performance of the Jewel Song by singing “Qu’on salute au passage” unbroken, rather than splitting it into two ‘takes’, as is sometimes done.

Jussi Björling’s Faust has been heard here before, but it remains as remarkable and gratifying as ever. Mr Björling’s singing of “Salut, demeure” was warmly received; so was Robert Merrill’s of “Avant de quitter”. And Cesare Siepi’s Mephistopheles was remarkable, even coming from so remarkable a performer as Mr Siepi.” He ended the review: “It was an evening to delight the ear, if not the eye.”

Jay S. Harrison didn’t experience the situation in the same way. He had hoped that “the great tenor would bring something of his vocal glamour to [the deplorable production]. That he did not do. Tonally his singing was covered by a colorless veil, and even his pitches were not wholly precise. Further, there was not a glimmer of personality to his interpretation, a condition shared by Cesare Siepi’s portrayal of Mephistopheles.” The only singer who found favour in Harrison’s ears was Robert Merrill, since there were at least “a few shreds of vocal brilliance”.

Harrison possibly had a bad day, since the other reviews principally speaking shared John Briggs’ opinion. In The New York Journal-American M. Kastandieck characterized the performance as “a burst of vocal splendour” and predicted that “with the present line-up of talent [Faust] will be a hit all over again.” More specifically he writes: “What I could hear of Miss Söderström increased my admiration for her all-round performance. Björling sustained my continuous joy in his singing; he still has no rivals among present-day tenors.”

An unsigned review from unknown source, titled “Faust returns to Met with Björling in the Title Role", says: Björling’s voice may not have the fullness it had a few years ago, but it still is a gem. Soaring buoyantly to his top register and emitting free tones throughout the range, his tenor remains one of the most beautiful of our time. It is ideal for Faust.”

Louis Biancolli in The New York World Telegram and Sun wrote straight to the point under the heading “Swedes Do Faust Proud”:

As for Mr Björling he was positively astonishing as Faust. After all these years his voice sounded fresher than ever, and his style even more natural and ardent. The love duet of the second act was a credit in sensitivity to both these artists … All in all, it was a proud day for Sweden.”

Jussi and Elisabeth sang one more Faust together a good week later, on 19 December. It was broadcast on the radio and recorded and is available on CD in very good sound (Pristine Audio PACO 064). There anyone can establish that Jay S. Harrison was talking through his hat in his judgements. Listen to: 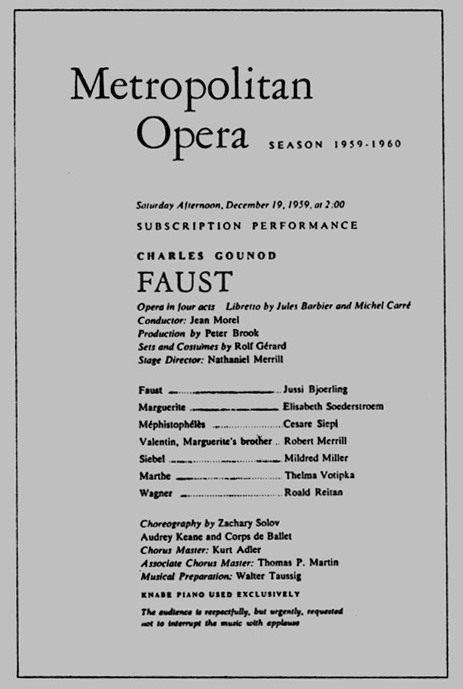 The Tosca performance on 16 December was reviewed in Musical America by the signature B.I. Licia Albanese sang the title role, which strictly speaking was a couple of sizes too large for her, but she and Jussi worked well together and B.I. wrote: “Some of the finest moments of the evening occurred during her scenes with Mr Björling. This Cavaradossi’s singing was sheer delight, his acting truly convincing, while his rousing cry “Vittoria! Vittoria! nearly started a peaceful Risorgimento* in the gallery.

Scarpia was sung on this occasion by Jussi’s colleague Leonard Warren, who was the same age as Jussi. B.I. wrote: “Once again Mr Warren’s portrayal of Scarpia was a triumph of vocal acting and dramatic characterization. In the finale of the first act he sounded especially impressive.”

Only 2½ month later Warren died in the midst of a performance of La forza del destino on the Met stage. He had just finished the act II aria ‘, which begins Morir, tremenda cosa (To die, a momentous thing).

Jussi’s last opera performance at the Met was on 22 December in Mascagni’s Cavalleria rusticana. B.I. reported also from that performance for Musical America: Mr Björling, as Turiddu, gave once again an example of fine musicianship.”

The New York sojourn ended on 27 December with a recital at Hunter College, where he was accompanied by Frederick Schauwecker. John Briggs was there for The New York Times and his header said: “Björling Excels in a Song Program”:

“The event was billed as a ‘concert extraordinary’ which proved to be no exaggeration.

The tenor’s voice was as splendid as ever, and his power to communicate to his hearers, if anything heightened since he was last heard here … Altogether it was such an evening of singing as is all too rarely encountered in the concert hall.”

* Risorgimento = the Italian name for the nationalist movement in Italy in the mid-19th century, striving for a united Italy.