Jussi of the Month February 2016

The 1955/56 season was for Jussi an America year. After the spring assignments, which were rounded off with the Swedish National Holiday at Skansen, Stockholm on 6 June, he only took part in the 125 years celebrations for KSSS (The Royal Swedish Sailing Society) at the Stockholm Town Hall on 19 July and two appearances during Dalecarlian Day in Furuvik Amusement Park on 31 July. After that he could relax in Siarö until it was time to transport himself across the Atlantic, where Carnegie Hall in New York was the first halt. 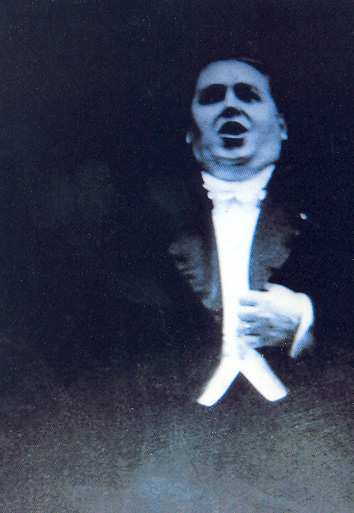 Jussi in Carnegie Hall 24 September 1955
The concert there on 24 September was recorded and is regarded as one of the gems in Jussi’s discography. You can listen to an aria (from Cavalleria rusticana) from that concert:

The whole autumn he then dashed around on the North American continent with the exception of November, which was spent in Chicago where he sang in eight performances at the Civic Opera. On 20 December he rounded off the autumn with yet another appearance at Carnegie

After the Christmas vacation he returned to the US at the end of January, where he could celebrate his 45th birthday on 2 February in Pittsburgh, the day after a much hailed concert the evening before. ”Colleagues and friends from far and near had gathered in his dressing room to await midnight and convey their congratulations”, reported Aftonbladet´s correspondent. ”Lots of congratulation telegrams arrived and among the presents to Jussi (who of course is an inveterate enthusiast for fishing) there were several pairs of cuff-links with fish motifs and the latest models of American spinning rods.”

Pittsburgh Press had intended an interview befor the concert, but it didn’t quite come down as planned:

”They come in all shapes, sizes and sexes.

The La Scala Opera Company of Milan has Maria Callas, who shrieks at process servers and calls Americans ‘barbarians’.

The Music Guild of Pittsburgh has Jussi Björling who doesn’t like to get up in the morning.

If Mr. Björling’s voice at 8:30 tonight in Carnegie Hall is anywhere near as powerful as it was at 10 a.m. when he was awakened in the Hotel Schenley Park, concert goers are in for a rare experience.

Here‘s a behind-the-scenes story of how it is in the newspaper business and the opera business:

A representative of the Music Guild scheduled a press conference for Metropolitan Opera Star Björling at 10 a.m. He left a message for Mr. Björling, which the tenor received when he checked into the hotel last night at 11.

Come 10 a.m., a photographer and a reporter, who had gotten up at six, as usual. But not Mr. Björling.

‘He left orders not to be disturbed until 1’, said the hotel people.

Reporter sneaked up seven flights of stairs. Banged on Mr. B’s door. Dialogue (with some deletions):

‘I left orders not to be disturbed.’ (Grumpily.)

‘But didn’t you get this message?’

‘Yes, yes – nothing! Nothing, nothing until one o’clock!’ (Thundering.)

‘Mr. Björling, do you want an interview or not?’ ‘OR NOT! (FORTISSIMO!) 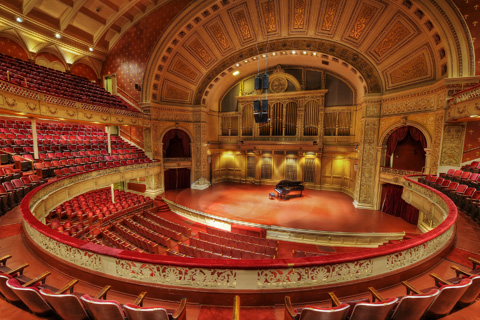 Many years had passed since Jussi last had performed in Pittsburgh, 19 years according to Pittsburgh Press. 13 December 1938, according to the chronology compiled by Roger Alderstrand and Harald Henrysson. A good 17 years in other words – a long time anyway. The paper’s music reporter Ralph Lewando was not completely overwhelmed. He thought that Jussi sometimes pressed his voice too much and that the tone became uneven. Moreover he complained that the singer held the climactic notes for too long. But he admitted that “Mr. Björling’s voice has warmth and sonority, brilliance and exuberance – qualities that create appeal and elicit audience response. - - - The middle range, even and flexible, was most impressive. Thus the German lieder were his most advantageous and artistic effort, each being etched with finesse.”

Donald Steinfirst, Pittsburgh Post – Gazette, agreed and confirmed that “it was in the German Lieder that Mr. Björling’s innate musicality asserted itself. For his singing had nuance and detail, vast shadings in it multi-colored delivery and generally pin-point intonation.” 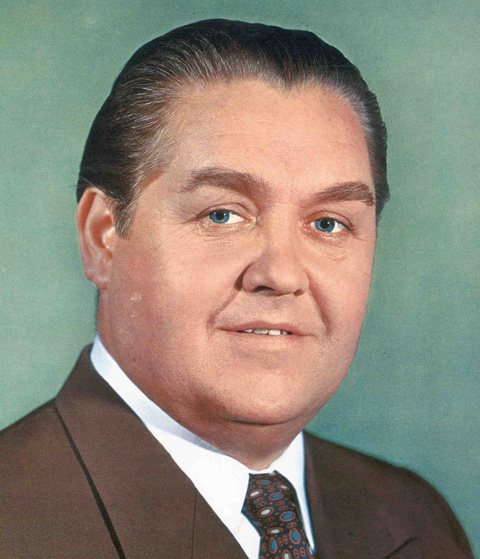 Portrait taken in Toronto February 1956
FANS HYSTERICAL CHEER BJÖRLING was the headline to Hugh Thomson’s review in Toronto Star after the concert in Toronto Massey Hall on 6 February. Having accounted for the repertoire, Thomson gives a graphic description of the final phase of the concert: “At the end of the last number of the printed program, and after a good share of encores after each group of songs on the recital, the stocky little tenor came on-stage alone to do a solo bow, with an air of finality to it. But the audience would have none of it.

It burst out shouting for encores. So the singer signalled his pianist to return. Then from every corner of the house, came shouted requests for special favourites. Björling finally signalled for silence and asked: ‘How about Turandot?’ This brought forth a tumultuous reception.

He was, of course, referring to the aria ‘None Shall Sleep’ in that opera by Puccini. It has become Björling’s trademark. He sings it so magnificently, few tenors can assay it without unfair comparisons being invited. And he sang it with all the magic at his power once again.

Afterward the management had to put up the house lights to subdue the hysterical fans.

He showed he still has one of the sweetest tenors before the public today.”

A good week later, on 17 February, Jussi made his comeback to the Metropolitan Opera after an absence of more than two years. For Verdi’s A Masked Ball Bing had gathered a true star gang where Jussi again appeared together with soprano Zinka Milanov and baritone Robert Merrill – well-known partners on stage as well as on records. There was also the eminent mezzo-soprano Jean Madeira as Ulrica and in minor parts one could find the splendid bass Giorgio Tozzi and the young tenor James McCracken, who some years later was to become one of the foremost dramatic tenors of his generation. In the pit was legendary Greek conductor Dimitri Mitropoulos, who at his entrance was hit by a surprise. In New York Herald Tribune Jay S Harrison relates what happened: 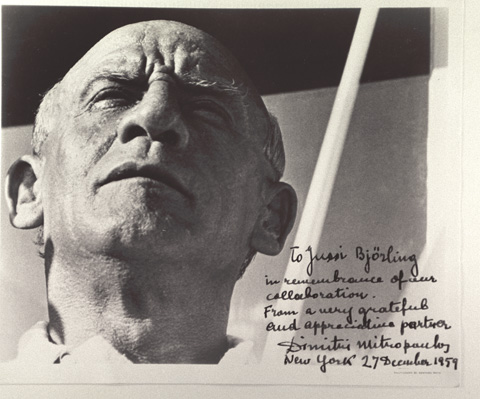 Portrait signed of Mitropoulos to Jussi 1959
“At the very start conductor Dimitri Mitropoulos on walking to the podium found that this place had been usurped by Rudolf Bing, who forthwith led the orchestra in a performance of ‘Happy Birthday’ in honor of the maestro’s sixtieth birthday, which occurs today. It was, I should say, a classic reading of

the piece, if a mite over-zealous.”

Enthusiastic about Jussi’s contribution to the performance was Harrison also to a high degree: “For those who know the work of Jussi BJörling it is simply enough to state that he was, as ever, Jussi Björling. And for those unfamiliar with the tenor’s voice I can only suggest that you buy a ticket to hear him even if it is necessary for you to burglarize your own children in order to do so.” (In April Jussi was to sing a number of further performances at the Met). “But be forewarned – do not expect a glamorous theatrical personality, a dramatic hero in stainless armor. Indeed, Mr. Björling is possessed of only two facial expressions: when he is happy he looks rather like a tickled cherub, and when he is sad he gives the impression of a Cupid who has somehow misplaced his arrows.

And does it matter? Not in any way, shape or form. For Mr. Björling is a glorious, full-throated tenor whose tones ring with color and are mostly true as tuning forks. His voice is fresh as spring water, clear, cool and unmolested by any faults of breath supply or control. In addition, Mr. Björling is equally at home in chipper, bumptious little melodies, of which ‘Di tu se fedele’ is one, and long-breathed, swooping arias that require, for their full effectiveness, the maintenance of an endless and pliable thematic line. Both types are plentiful in ‘Ballo’, and Mr. Björling reeled them off with such ease it seemed they had been written with his special skills in mind.

At the moment of his first appearance on stage as Riccardo, one exuberant standee gave forth a hearty “Welcome Back!” It is a sentiment, I suspect, we all share.”

The “Happy Birthday” tribute for Mitropoulos and the standee’s shout of “Welcome” are also described by Anna-Lisa in her and Farkas’ book “Jussi”.

In New York Daily Mail Douglas Watt opens his enthusiastic review: “It seemed like old times, last night at the Met. Up on the big stage, Jussi Björling and Zinka Milanov were singing their lungs out as a pair trying to avoid love in Verdi’s ‘A Masked Ball’. They had been doing the same thing some 15 years earlier, when I covered my first Met opera.”

Watt was also satisfied to have made his vocal debut at the Met, if only in the shape of community singing of ‘Happy Birthday’. As for Jussi he wrote: “He was in fine voice and it was a pleasure to hear his clear, true tenor soaring out at length and never faltering. The standees were so happy to have him back that they drowned out his entrance music with their applause.”

The other reviewers were just as overwhelmed. Swedish Aftonbladet summarized the reactions: “Smash Hit!” The three remaining concerts were also met with ovations. After the concert in Milwaukee on 24 February headlined the review: “The Greatest: That is Jussi”. Two days later Chicago Daily Tribune wrote after the concert in Orchestra Hall: “Magic Spell Woven by Björling”, while Pasadena Star News in a preliminary article for the last concert, on 29 February, presented a photo where Jussi’s daughter Ann-Charlotte rehearses Mimi’s aria from Bohème together with her father.

The rest of the spring term 1956 in the US was devoted mainly to opera, the very last appearance in Rigoletto in Cleveland.