In May 1946, Jussi Björling, travelling with Anna-Lisa, had still half a month left of his first American tour after WWII, his longest so far. On May 2, he opened the 53rd May Festival in Ann Arbor, Michigan, together with the Philadelpha Orchestra under Eugene Ormandy. A reviewer noted that the Hill Auditorium, which held an audience of 5,000, ”was crammed to the most remote cranny, with the first audience in years not strongly tinctured with Navy blue and Army olive drab”.

The concert was dominated by orchestral music. Jussi began with two French arias and returned with three Italian ones. ”It is a never-ending source of wonder that a man reared in the chill northland should be able to sing with all the florid passion of a born Italian.”

Two days later, Jussi joined the Met’s tour in Minneapolis with Bohème, where Dorothy Kirsten was his Mimì. ”The tenor’s smooth and easy voice, especially in the higher lyric passages, has that something more than perfection that conveys a thrill.” 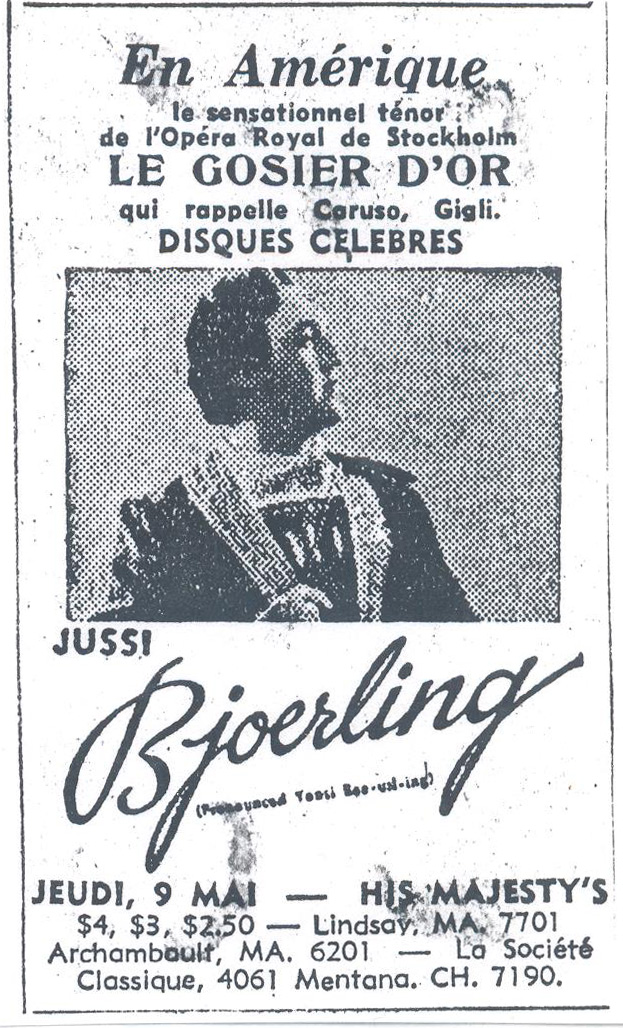 On May 9, Jussi had crossed the Canadian border and sang for the first time in Montreal, at His Majesty’s Theatre. A critic first tried to describe his build and took his comparison from football: he was ”not unlike many of those men who so successfully acted as blocking half backs for Minnesota during the 1930’s”. But this man also ”posesses a voice of tremendous power, remarkable range, fine tonal quality and delightful warmth”. Anna-Lisa wrote in Jussi that this was a concert she remembered especially from the tour, with her husband in

Some other examples from media before the concert on May 9: 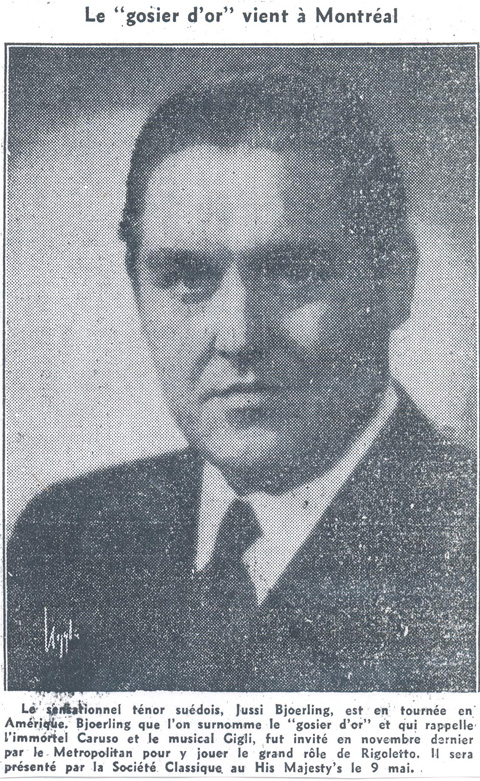 On the radio program Ford Sunday Evening Hour in Detroit, Jussi had already sung in 1938. On his 1945/46 tour, he appeared there first in January and then returned on May 12, under the baton of Fritz Reiner (1888-1963). Reiner had earlier conducted one of Jussi’s Ford programs, and many years later they would cooperate once again for Jussi’s last commercial recording, Verdi’s Requiem in 1960.

On Jussi’s radio programs, it happened that he performed songs in English, which he otherwise did not have in his repertoire, and an example of that was found in this concert: Mother o’Mine, a setting by the Englishman Frank E. Tours (1877-1963) of Rudyard Kipling’s poem.

Before Jussi and Anna-Lisa left New York on the Swedish American Line’s Drottningholm on May 18, on the 15th there was a Carnegie Hall concert on Jussi’s program. The conductor of this Carnegie ”Pop” Concert was Simon Parmet (1897-1969). He was Finland-Swedish, a brother of the composer and critic Moses Pergament, who followed Jussi’s whole Swedish career closely in his reviews. Jussi took care of the vocal part in Carnegie Hall with songs by Sibelius, Grieg, Alfvén and Rangström, but the concert also offered orchestral music of the three first-mentioned composers.

On Drottningholm, Jussi and Anna-Lisa were joined by two other Swedish Met artists, the tenor Torsten Ralf and the mezzo Kerstin Thorborg. Here the Björlings are seen together with Torsten Ralf. 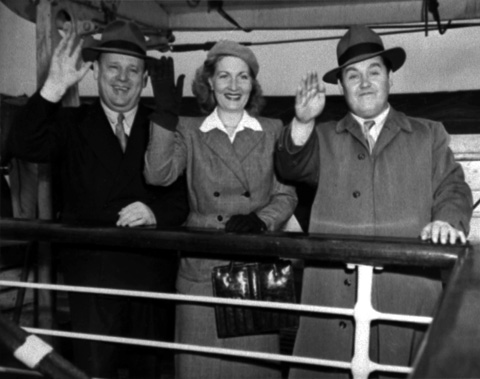 On May 29, Jussi ”had barely put his foot on his native soil” when he met his Swedish public again at the Liseberg Concert Hall in Gothenburg. He brought forth a volley of applause, with Carl Tillius as his accompanist. The reviewers were most impressed by the operatic part of the program, while a couple of them remarked that the opening song section this time gave the impression of being a bit improvised.