Jussi of the Month September 2016 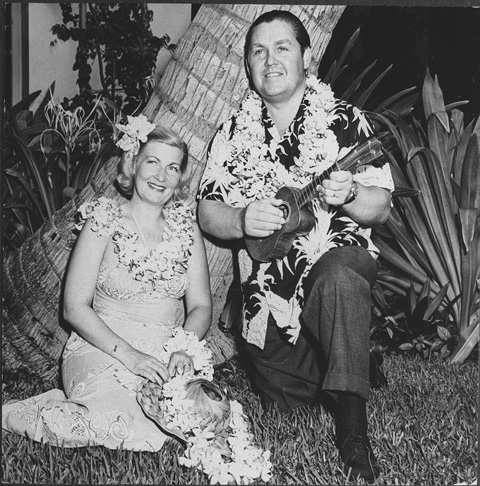 In Aftonbladet on 16 August 1949 there was an article headed “Happy JUSSI went to Honolulu. Opens opera season in Frisco”. It was signed GLOKAR WELL, penname for Oscar Söderlund, legendary sport journalist and boxing expert at Stockholms-Tidningen. It began thus:

“- Hi there, said the voice on the phone. I’m flying to America in half an hour.

- That’s the right thing to do. Lucky dog! By the way, who are you, I asked, there are so many calling the day after a boxing gala*.

- How could I hear that when you are not singing?

- …and I am at home in Nybrogatan, but Anna-Lisa has phoned for taxi, so we are leaving any minute. The first concert is in Hollywood Bowl with an orchestra of 60-70 men and 30 000 listeners.

- Of course. We always sing together nowadays. Then we go to Hawaii, where I give a concert in Honolulu. I’ve never been there, so it will be fun. Then we fly to San Francisco, where I will open the opera season. It will be Tosca. I’m booked for five performances there, and Anna-Lisa and I will sing in Bohème.

- What about the Metropolitan? There they will want you as usual, won’t they?

- Oh yes, after San Francisco we are heading for New York, where I will stay and sing at the Met for the rest of the autumn. The opening programme will be Manon Lescaut, where I’ll sing the role of Des Grieux, which I’ve been studying this summer.

- When do you expect to be back home again?

- I’ll be home for Christmas and New Year.

- … Joel** has contracted me for five evenings at the Opera, when we will mount Manon Lescaut. Don’t you feel sorry for Olle Tandberg all the same, but he wasn’t up to the mark opposite Walcott – he has to be the next world champion the way he could box and wallop. Give him my regards. Now Anna-Lisa shouts that the cab is here. Are you coming to Bromma***?” 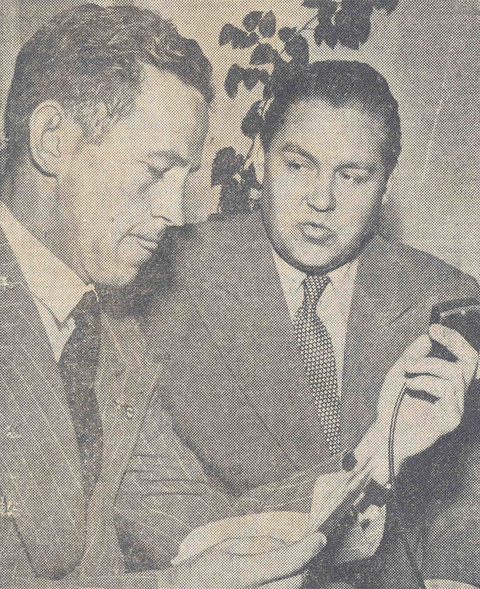 Bill Arhur is interviewing Jussi
Glokar came and so did the radio reporter Bill Arthur from Australian Broadcasting Corporation. He had been hunting Jussi to get an interview and now he had finally managed to track him down. On a wire-recorder – a forerunner of the tape-recorder – he recorded the interview, which can be heard at “Jussi of the Month, August 2014. There you’ll also find reviews from the Hollywood Bowl concert. 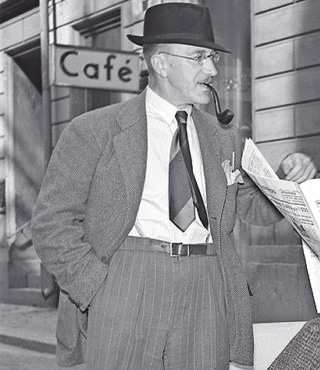 Glokar Well rounded off the article:

“There were big tears in Jussi’s eyes, when he hugged his kiddies, and Anna-Lisa had to bite her lip, when she said goodbye to them. Separation is difficult, ‘but we’ll be back for Christmas’, they comforted themselves

– but of course that seemed very distant this blossoming, sunny day in August. And so they flew away.” 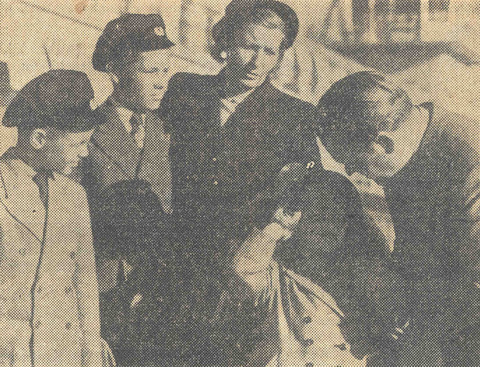 The Hollywood concert was a great success and a few days later the couple appeared in San Rafael on San Francisco Bay at a concert in Dominican College, accompanied by pianist Jan Popper. After that Jussi and Anna-Lisa flew to Hawaii where they gave a concert in McKinley Auditorium in Honolulu on 6 September – their only appearance there. The local papers were overwhelmed. “Anna-Lisa, known as Stockholm’s most beautiful woman and soprano singer, lived up to expectations”, wrote the Honolulu Advertiser’s Edna B. Lawson, and continued: “She is a person of magnetism who charms her listeners… [Her] voice, of considerable power, is one of sweetness and purity. With feeling and sympathy she gave Songs my mother taught me and Solveig’s song a youthful freshness of Nordic quality.”

She was no less impressed by her partner: “Jussi’s great and deep knowledge of a singer’s fine phrasing was exemplified as a lesson for any singer. His choice of program numbers and manner of delivery is impeccable. His tones are of poignant beauty and above all he knows the perfect bel canto singing of the Italian school. He avoids any forcing of high tenor notes. Both artists keep to the pure vocal line and with no loss of dramatic coherence.”

Jussi sang among other things three songs by Richard Strauss which captivated Edna Lawson: “Few lieder artists sing Strauss’ compositions as does this man. Serenity, joyousness and quiet mood made the lyrics sound like magic.”

Mary Jane Ford in Honolulu Star-Bulletin was just as enthusiastic: “Jussi Bjoerling and his charming wife Anna-Lisa Bjoerling gave a concert on Tuesday evening, which was the finest Honolulu has heard in some time.”

Pianist Ruth Orcutt Bacon was also appreciated. She “assisted both singers with highly satisfactory piano accompaniment and completed the musical scene in every sense.” 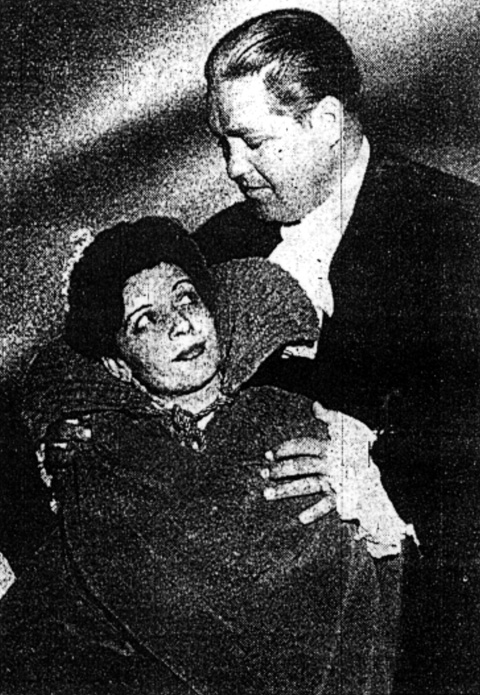 Elisabetta Barbato and Jussi at San Francisco Opera, 20 september 1949
After this flying visit to Hawaii, they went back to San Francisco, where Jussi was to open the opera season on 20 September with Tosca, an opera that hadn’t been played there for quite a number of years. In the title role young Italian soprano Elisabetta Barbato (1921 – 2014) made her American debut while Scarpia was played by veteran Lawrence Tibbett, then at the end of his operatic career.The opinions of Barbato were mixed but she attracted attention for her neat slender figure(“Thank God”,

wrote Alexander Fried in San Francisco Examiner) and her acting ability. The singer Fried mentioned first was however Jussi: “It was a joy to hear [him] in the role of Cavaradossi – painter, lover of Tosca and liberty: gallant, heroic friend. The Swedish tenor’s voice is probably unsurpassed in its type in the world today. The power of its impact was matched by its fine and expressive melodic line.”

Alfred Frankenstein in San Francisco Chronicle extoled conductor Fausto Cleva to the skies: “He is genuinely one of contemporary opera’s great men, and there was only one singer on the stage who altogether measured up to his stature. That was Jussi Bjoerling, a tenor in the grand tradition. Like most tenors Bjoerling is not the most convincing actor imaginable, but every phrase he sings has its thrill of great tone, and for all the immensity and lift of his voice, he does not permit himself the luxury of playing fast and loose with the text of the music or with the tempered scale. Surpassing power, magnificent tone, complete musical integrity – these are some of the qualities of Bjoerling, and there are few tenors who are his equal in any one of them.”

The anonymous writer in San Francisco Call-Bulletin was not inferior to Frankenstein in his admiration: “Bjoerling’s tenor fell on the ear like oil and honey. No other voice in that register has greater emotional pull or more exciting technical brilliance.”

Less than a week later, on 25 September, Jussi took part in a Sunday matinée performance of La bohème, where Licia Albanese sang Mimì. Both Fried and Frankenstein were there and Fried didn’t hold back his enthusiasm: “Surely Bjoerling is one of the supreme tenors that this city has ever acclaimed. His voice has power and flavour, smoothness and fire, a true personal emotion and the exciting climax of unstrained soaring high C’s.”

A recording was made with Jussi and Licia in connection with the La bohème performancies. 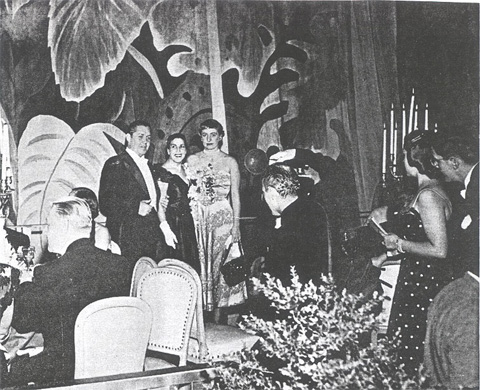 Frankenstein was brief but expressive: “Bjoerling’s prodigious vocalism and magnificent musicianship were as great here as they had been in Tosca.”

Jussi sang another four performances in San Francisco, two Faust and two Manon Lescaut, the latter his first new role in ten years. One more Manon Lescaut followed in Los Angeles before he left the West Coast and headed towards his ‘home stage, The Metropolitan. Also there Puccini was on the agenda: three Manon Lescaut, where his Manon was Dorothy Kirsten, and three performances of Tosca, where he was reunited with Elisabetta Barbato. Her total Met-career was confined to these three performances. After the last of them Jussi and Anna-Lisa could finally return to Stockholm and a well-deserved Christmas vacation and, most of all, to reunite with the children, who hadn’t seen their parents in more than four months.

** Joel Berglund (1903 – 1985) bass-baritone with international career, was a friend of Jussi’s and he had in 1949 been designated director of the Stockholm Opera.

*** At that time Bromma was Stockholm’s international airport.