Jussi of the Month November 2016

The season 1932-33 involved intense work for Jussi Björling. Besides quite a few concerts and a couple of guest appearances in Copenhagen he sang around 60 performances at the Stockholm Opera, including eight operas for the first time. Of these three were premieres (one moreover a world premiere) and two of those premieres fell during November 1932.

That year it was 100 years since Gaetano Donizetti’s L’Elisir d’amore was premiered in Milano, and this was a suitable reason, the management of the opera thought, to make a new production of the work. The Stockholm Opera had staged L’Elisir d’amore as early as 1840, but since 1905 it had been absent from the repertoire. 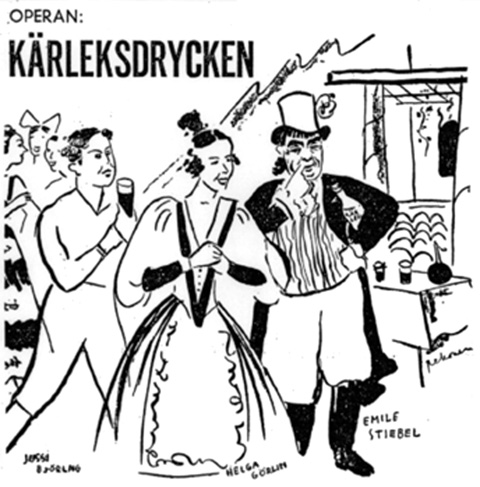 At that time Donizetti was not in favour with the pundits. Wilhelm Peterson-Berger had laid the foundation for the decline when he in his review of Lucia di Lammermoor in 1913 had slammed the opera to pieces with the abuse “The silly thing from Lammermoor”. And the scepticism of the latter-day critics was obvious after the premiere on 9 November.

Curt Berg in Dagens Nyheter devoted most of his review to complaining about the banalities of the libretto and he insisted that Donizetti didn’t belong to the great spirits. But he appreciated in the main Ragnar Hyltén-Cavallius’s production, ”which anyway wasn’t short of cheerful spirits. Helga Görlin and Jussi Björling created a charming love-couple; both sang and acted splendidly, and this reviewer is delighted to be able to emphasize the winning naturalness with which Mr Björling appeared. This showed that the young singer makes progress, at least within the style he now has at his disposal.” 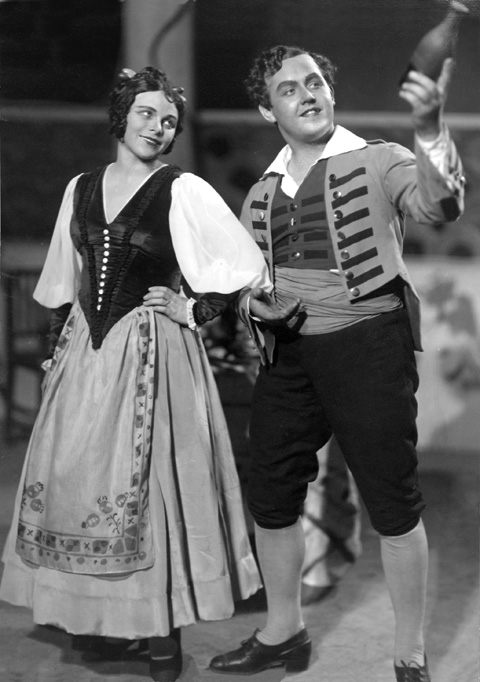 Along those lines Moses Pergament also moved in Svenska Dagbladet: “Although the music can be enjoyed without discomfort, the text is on the other hand rather hard to digest … [But] if one can enjoy [the singing] one can leave the text to those who have an eye for it.

And this time the singing was truly enjoyable; Helga Görlin and Jussi Björling vouched for that. It’s true that the former didn’t quite manage to convince me that she was what she was supposed to be, i.e. ‘capricious and coquettish’. It’s not quite in her line. Instead she was lovable and graceful and twittered her role with charming euphony, mischievousness and warmth. For Jussi Björling it is easier to stand out as Italian with his voice than with his acting. So calm as a cucumber as he stood there – two yards from the coveted – at the moment when she all of a sudden admitted that she loved him, an Italian would never in all his life have been. (The reprimand hits also the director to some extent.) But in his singing Mr Björling was excellent. His voice was in gorgeous shape.”

In Arbetaren Leon Fried wrote appreciatively that “Jussi Björling had his – as far as I can remember – most magnificent evening yesterday!”

Nadja (Nanna Müllern-Berglund) in Stockholms-Tidningen also enjoyed herself greatly: “Jussi Björling as Nemorino delighted his loyal audience with his beautiful voice. He has a way of going to the people’s hearts – but he has a disposition to put on weight – so he has to be on his guard!”

Another reviewer, along the lines of Nadja, considered that Jussi probably hadn’t obeyed the opera director’s decree about slimming. Set Poppius in Aftonbladet, didn’t share his opinion, however. He opened with a tribute to veteran Emile Stiebel (who had taken part also in the previous production almost thirty years earlier) “who was extremely well at home in the role and dominated the stage in grand and radiant buffo style as the swindler Dulcamara. There was comical grandeur about both his singing and acting. Considerably less comical was the increasingly narrowing Jussi Björling as the lovesick Nemorino, but he sang with captivating sonority; and he received a minute-long round of applause for his serenade in the second act. It was lovely music, and it was a close shave that the opera director hadn’t been alone at repeating an aria in mid-act.” 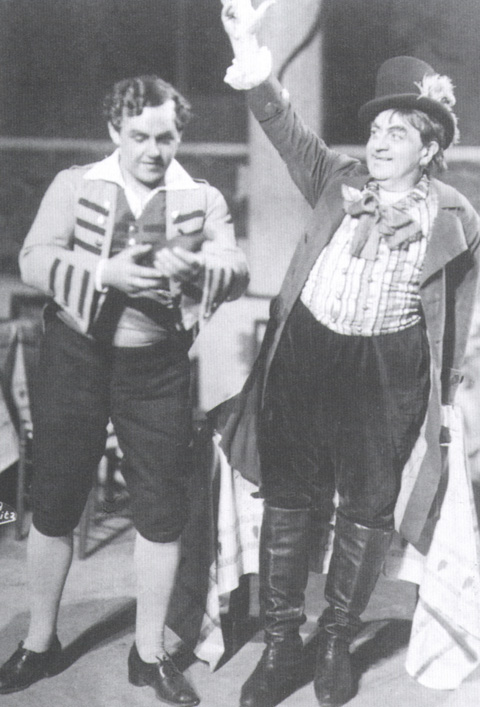 In Göteborgs Handels- och Sjöfartstidning A. B-r regretted that Helga Görlin didn’t get the opportunity to show off her coloratura but stated that Jussi Björling was luckier in that respect vocally and he produced beautiful tenor singing that partly reminded of the late Arvid Ödmann*.” Listen here (Naxos 8.101101):

Finally, G-a in Nya Dagligt Allehanda, thought that Jussi had a successful evening but he also expressed reservations: “His singing was more temperamental than his acting; it seems that the singing task occupies him at the expense of the acting.” Like the other reviewers G-a noted that there were many empty seats in the auditorium. The reason for that was that the Concert Hall simultaneously had a concert with the great cellist Piatigorsky. Bad choice of day for the premiere, concluded the reviewer. 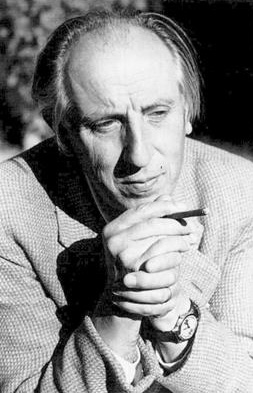 Hilding Rosenberg
Only two weeks later, on 24 November, it was time for a new premiere. This time it was moreover a world premiere: Hilding Rosenberg’s Resa till Amerika (Going to America). The composer conducted and Hyltén-Cavallius was also this time director.

“Interesting Swedish Opera Premiere” said the header of Kurt Atterberg’s long review. It contained both praise and blame. “Dramatically there are great deficiencies in the libretto”; he writes, “and accordingly also in the music.” Still Atterberg is positive to Alf Henrikson, the author: “The text-book is fascinating to read as a kind of versified short story.” Rosenberg also gets quite a lot of praise: “In spite of the lack of tempo (in the singing) and light in the music … Rosenberg’s music contains an extraordinarily lot of beautiful and fascinating things, discreet orchestral colours and in many places very original facture and sound.”

Joel Berglund and Helga Görlin are praised for their achievements as He and She. “Berglund’s magnificent voice carried the whole work.” Jussi Björling sang the role as bargeman and he, like Leon Björker “were sonorous comprimarios”. Unfortunately it seems that no other newspaper thought this premiere was worth covering. With hindsight one can also establish that Resa till Amerika didn’t remain in the repertoire. It has never been performed again. On the contrary the orchestral suite that Rosenberg compiled a couple of years later – containing the well-known Railway Fugue – is played fairly often and has been recorded. It was also that part of the music that Atterberg appreciated. Rosenberg was to make amends as opera composer a decade later with Lycksalighetens ö (The Island of Bliss).

* Arvid Ödmann (1850 – 1914) was a highly regarded tenor at the Stockholm Opera for several decades and preserved his youthful bright voice also at a great age.