Jussi of the Month December 2016

In October of 1948 Jussi came to the USA to first sing with the San Francisco opera and give some concerts. At the start of December he was in New York to open his seventh Met season, but before that he took part in an unusual event on December 2nd. At a ceremony in the Swedish Consulate, Consul-general Lennart Nylander awarded the Royal Swedish Order of Vasa, Class of Commander, to Edward Johnson, Met opera manager. Jussi sang Vår sångarhyllning tag (Receive our song of praise) in a quartet with Anna-Lisa, Joel Berglund---who would himself soon take over as manager of the Royal Opera in Stockholm----and Ingegerd Wedén. As a solo, he sang Kung Heimer och Aslög. The accompanist was Arne Sunnegårdh who a few days later would marry Wedén. Sunnegårdh was Jussi’s schoolmate at the conservatory, trained as a singer but best known as a singing teacher and choir director. He would also sit at the piano for a few of Jussi’s concerts in the USA in 1948 and ’49. Around 200 people attended the ceremony, where the Met’s Chairman of the Board, George A. Sloan, also saluted Johnson.

In the picture from the Order of Vasa ceremony, we see the singers on the left. On the right Edward Johnson with Consul-general Nylander. 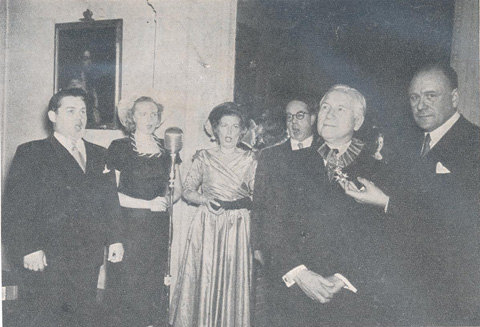 The day after the Vasa ceremony, December 3rd, Jussi was at the Met in the season’s first performance of Trovatore under the direction of Emil Cooper and with Stella Roman as Leonora. Several critics were negative about the performance as a whole: ”Only fitfully rewarding,” wrote the New York Herald Tribune; ”the performance was unsatisfactory in almost every respect” said Musical America. This hard judgement did not involve Jussi, however. ”Only Mr. Bjoerling brought to the role of Manrico anything like the blend of lyricism and bravura style required for a telling conveyance of Verdi’s exacting music,” was the opinion of the Herald Tribune, which was especially delighted by Ah sì, ben mio: ”stylistically without blemish and sound a balm to ears which until then had heard little enrapturing or even acceptable in the way of vocalism.” ”Only Jussi Bjoerling sang well enough to give Verdi’s glorious melodies anything like their due” agreed Musical America, and mentioned not only Ah sì, ben mio but also Deserto sulla terra.

On December 11th Jussi was replaced in Trovatore, but when he returned on the 16th in the season’s first Bohème, directed by Giuseppe Antonicelli and with Bidú Sayão as Mimì, the performance got much better reviews than the first Trovatore. 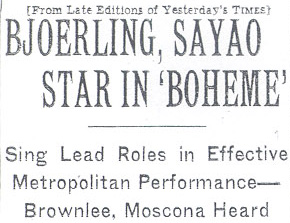 Noel Straus in the New York Times had not in a long time “heard as convincing and impressing an account of the crucial first act of this opera. For the entire scene between Mimì and Rodolfo was projected with an amount of poetry, tenderness and ardor that made it uncommonly touching. Rarely are both the soprano and the tenor parts so sympathetically sung, and every word of the text so consistently according to its due significance, as on this occasion.” Straus praised Jussi’s singing for ”its tonal perfection, expressiveness and warmth in a most satisfying and finely detailed portrayal.” Much praise was also given to the singers by Virgil Thomson in the New York Herald Tribune, who speculated that ”the absence of Italian singers from the major roles may be credited in part for the graciousness of the performance, because Puccini’s music does seem to bring out the lowest element in the Italian musical nature without having at all that effect on foreign artists.” His judgement of Jussi was that he ”alone among the tenors who have sung Rodolfo at the Met in my presence during an eight-year period, he interpreted the whole of it … without sobbing, bellowing, gulping or any other vocal abuse aimed at representing uncontrolled self-pity.”

When Trovatore toured to Philadelphia on December 21, the performance as a whole was better received than on its home stage 18 days earlier; the Phildelphia Inquirer regarded it as ”uncommonly well sung.”  The opinion of Jussi was that he ”is perhaps a more softly lyrical tenor than is ideal… But he is an admirable artist and an adaptable one.”

Before Christmas, Jussi and Anna-Lisa had let their three children come over together with their grandmother Emy. On Christmas eve, they and Joel Berglund with his wife, were invited to dinner at the home of Consul-general Nylander. 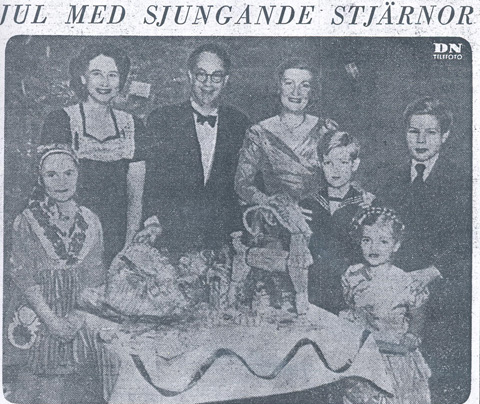 Christmas dinner at the home of Consul-general Lennart Nylander. Joel Berglund with his wife, and Anna-Lisa with the Björling children. For some unknown reason, Jussi is missing. The girl to the left is called Birgitta Lamborn.

The radio broadcast of Bohème on December 25 with Jussi, “a tenor from Stora Tuna, Sweden,” and artists from five other countries, is announced in Opera News. Click on the image if you want it larger. The Met performance of Bohème on Christmas day, December 25, was broadcast. We can therefore still listen to what Musical America praised as”one of the best La Bohème performances in a number of seasons.” Paul Jackson in “Saturday Afternoons at the Old Met” found it hard to believe that Jussi, who had made his Met debut in that opera in 1938, had only made his first radio broadcast of the role 10 years later. ”His Rodolfo is long in coming and, on this broadcast, a gift worth waiting for.” Jackson later gave a detailed analysis of Jussi’s interpretation of the role. According to him Jussi operates “in a more controlled emotional climate,” and without any overplaying, but that doesn’t mean ”that his Rodolfo is at all lackluster in song or manner”. 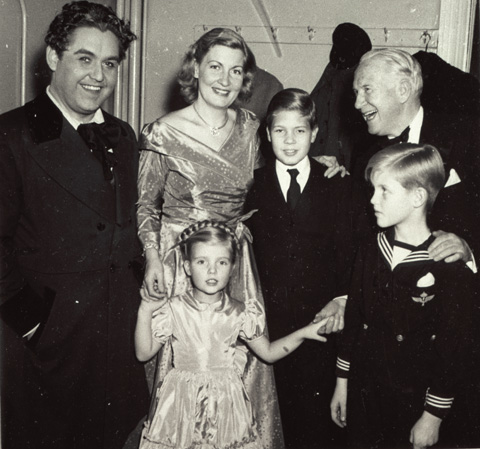 The Björling family with opera manager Johnson in Jussi’s dressing room after the performance. 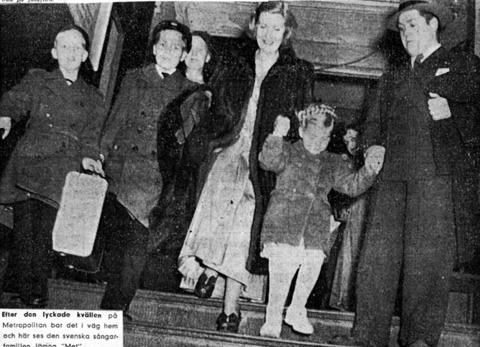 The Björling family leaving the Metropolitan

The day after Christmas Jussi and Anna-Lisa returned to the Met to take part in a Christmas party organized by AGMA (American Guild of Musical Artists). On that occasion, Anna-Lisa sang on the stage of the Met for the only time when she and Jussi joined in O soave fanciulla from Bohème. Afterwards she said she was planning to learn the entire main roles in Bohème and Romeo and Juliet----which she would also sing together with Jussi on stage in the next years---and even Micaela in Carmen. For Jussi the evening meant an unexpected effort. When the ensemble from the Aida triumphal scene was to be sung, it was clear that Radamès, Frederick Jagel, hadn’t arrived. Jussi stepped in and sang his part in Swedish. He had never studied the role in Italian, and would never sing it in America at the Met, but in Chicago 10 years later.