Jussi of the Month January 2017

After some performances at the Stockholm Opera round the turn of the months August/September, Jussi spent the autumn 1956 in the US, where he appeared at the War Memorial Opera House in San Francisco and the Civic Opera House in Chicago, sandwiching the odd visits to Los Angeles and Detroit and a few concert appearances. The last one was on 11 December at the Brooklyn Academy of Music in New York, and then he could return home after four intensive months ‘over there’ and celebrate Christmas and New Year in the bosom of the family.

There was however little time for relaxation since the Stockholm Opera had booked him for six performances during January, the first of those as early as on 3 January. It was Tosca with a formidable star trio. Besides Jussi they boasted Birgit Nilsson and Sigurd Björling. 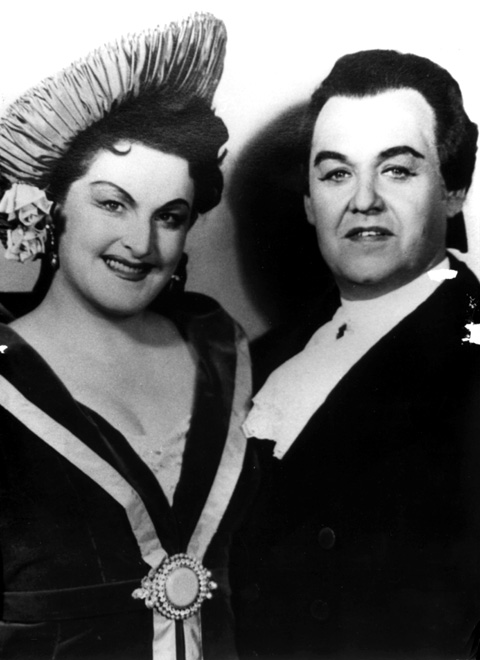 Stockholms-Tidningen had a large photo on the front page with reference to the review on page 11. The caption read:

“A great evening at the Opera for those who had managed to push themselves to the front of the ticket queue. One admirer of Jussi who was allowed to approach the star-singer was Jussi’s daughter Ann-Charlotte, who thought daddy had become even more handsome on stage since he during the US trip had lost 20 kilos.” The paper’s reporter Lennart Swahn also mentioned that Jussi had slimmed: “Blazingly fiery and slender the unfortunate painter entered the stage before a sold-out house and gave in the joy of the moment Tosca a kiss which probably was more smacking than the director had planned. Cavaradossi is not Jussi’s best role, but he does it unaffectedly and spreads his tenoral euphony out in the stairwells. E lucevan le stelle alone is worth 22 SEK plus advance booking fee, confided a happy lady in the stalls. And right she is. Birgit Nilsson’s Tosca and Sigurd Björling’s suitably satanic Scarpia give however also value for one’s money. With Sven-Erik Jacobsson’s sacristan this team should be an asset for any opera audience in the world.” Swahn’s only objection was that he wished Jussi would widen his repertoire.

Folke Hähnel in Dagens Nyheter remembered in his review the frustration he felt in his youth when he met old opera habitués who remembered great singers from the past. But he added: “This Thursday evening a packed audience could make a mental note of the constellation Birgit Nilsson – Jussi Björling – Sigurd Björling in Tosca, a trio that should stand the test of time for many decades.” Svenska Dagbladet also mentioned “three artists so equal in merit as Jussi Björling, Birgit Nilsson and Sigurd Björling.”

Two days later, on Saturday 5 January, Jussi again entered the stage, now as the Duke of Mantua in Rigoletto. A note the day before with the header SOLD OUT, reported that “for Jussi Björling’s guest appearance at the Opera on Saturday all the tickets were sold out as soon as staff had time to attend to them.” 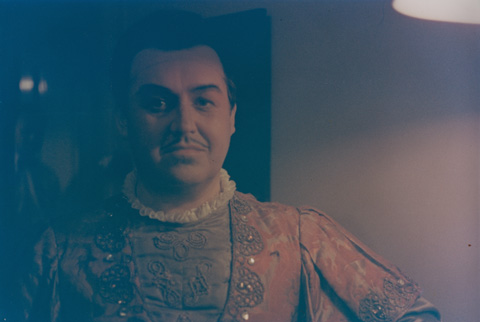 Jussi as the Duke in Rigoletto 5 January 1957

In the cast one finds world-stars-to-be like Kerstin Meyer and Ingvar Wixell in minor roles. The director was Göran Gentele, but Yngve Flyckt in Expressen didn’t think this was an exemplary performance. Focus was too much on bravura and show, was his verdict: “It seems that we still have a long way to go before we can regard opera as a seriously intended drama about people.” On the other hand he was filled with admiration for the three leading actors: “Jussi Björling felt flexible, free and happy as the Duke and served lots of vocal delicatessen. Erik Sundquist grabbed every opportunity to show off in his most celebrated role as Rigoletto and Eva Prytz created a most delicious Gilda – I don’t believe I have heard her singing so beautifully and purposefully.”

The performance was recorded by Swedish Radio and the recording has afterwards been issued on Bluebell ABCD 044. From that performance, listen to:

Sold out was also the performance of Il trovatore on 11 January. Aase Nordmo-Lövberg, Kerstin Meyer, Hugo Hasslo and Erik Saedén complemented Jussi gloriously, and Lennart Swahn noted with satisfaction that Jussi hadn’t appeared in Il trovatore in several years “which made this extra satisfying.” Hugo Hasslo, a great Verdi baritone, was of course in his element, and so was the world-star-to-be Aase Nordmo-Lövberg. Kerstin Meyer had made her debut at the Stockholm Opera a few years earlier as Azucena and had made the role her own. “Jussi didn’t shine only with his steely bright top notes, his lyric saltness was also superb and no one should be able to complain about his general dramatic temperature at the moment.” So far Lennart Swahn.

In Aftonbladet Gun de Monchy rejoiced at “an almost ‘new’ opera as a change from the usual Bohème and Rigoletto diet”. She continued: “There was … lustre and festivity about yesterday’s performance, and that old operas appear as new when sung the right way was proved not only by Jussi himself, who sang and acted in exuberant mood, but also by the other three main characters.” Both she and Lennart Swahn noted however that Jussi for the first time transposed the stretta down. 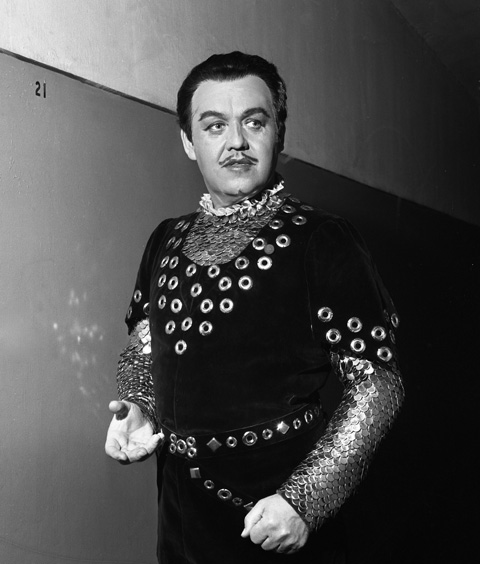 In Bohème on 15 January Hugo Hasslo was again on stage, Eva Prytz sang Mimì and Kjerstin Dellert was Musette. No reviewers seems to have been present but several papers had notes about this being Jussi’s last appearance before he, together with Birgit Nilsson and Sigurd Björling was flying to Switzerland to inaugurate the Swedish week with a guest appearance in Tosca in Zurich. 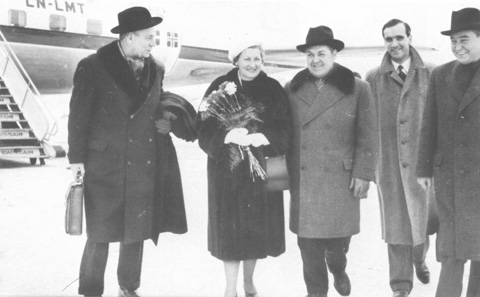 After the Tosca performance the reviewers outbid each other in superlatives. The feared Willi Schuh in Neue Zürcher Zeitung opened his article: “Such torrents of rapture, that the Swedish guests evoked, we have hardly witnessed in 30 years. Birgit Nilsson has an almost incomprehensible capacity to find the most abundant nuances in her tone. Her interpretation covers the whole range from darkness to brilliant power and is enlivened every moment by her great dramatic talent. Jussi Björling has a truly enticing lyric sheen in his glorious tenor which seems to scoop from inexhaustible wells. His voice is the most beautiful and most cultivated since Gigli’s in his prime.”

The anonymous writer in Tages-Anzeiger was also full of admiration. “Jussi Björling has a tenor with enough voltage to give him opportunities in the heroic repertoire. His acting is limited to the most elementary and stands back for the vocal achievement. His voice acts as balm also in agonizing scenes and every note becomes aesthetically enjoyable in its wonderful softness. This tenor has a radiation, a warmth, a cordiality and an amiability of utterly rare kind.”

In Die Tat wrote a Dr Scheider, regarded as a Swiss Peterson-Berger, but this time he hadn’t dipped his pen in vitriol, if anything in lime blossom honey. He is in raptures over finally witnessing a really true opera evening without “angry director tyranny, completely alive through the personal radiance of the singing guests.” He is impressed by Jussi’s warm timbre and the perfect vocal mastery. Birgit Nilsson is the ideal Tosca and Sigurd Björling “the dazzling combination of beast and gentleman”.

Back from Zurich there was one more Trovatore (26 February), which was recorded backstage by a member of the chorus on Margareta Bergström’s behalf. She was the Azucena of the evening. The recording isn’t complete. The first scene is missing, but everything that Jussi (and Margareta Bergström) sang is there. Finally a Bohème (29 January). From neither of these performances there are any reviews preserved.

This was a rather comprehensive and strenuous month for Jussi. Still he managed to squeeze in a recording session on 22 and 23 January in Stockholm’s Concert Hall with the Royal Orchestra under Nils Grevillius. Dagens Nyheter’s reporter (unfortunately not named in the cutting I had at my disposal) was there and published on 26 January the following ‘scoop’: 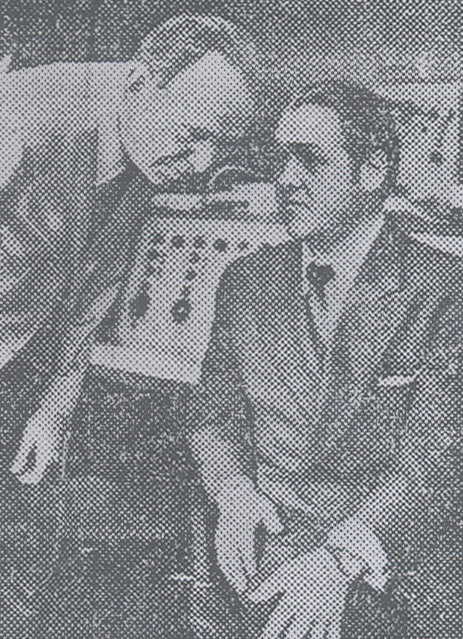 Nils Grevillius and Jussi recording on 22/23 January 1957
“Jussi Björling has, believe it or not, given two big concerts in the Stockholm Concert Hall before – an empty auditorium. Only Mrs Margareta Grevillius, née de Geer, Aftonbladet’s Eric Öhman and yours truly humbly attended the event.” Later Anna-Lisa and Ann-Charlotte supervened. Jussi was in top shape. "With white-hot top notes, with delicious pianissimos and audible smorzandi, Italianate fermatas and the odd southern sigh in the midst of the blond yearning Jussi

demonstrated the mastery of his life.

Not even 17 kilos loss of weight has affected his vocal health. His chest is intact, it is his waist that has diminished. In a couple of months the record will be on the market.

In the interval coffee was served. Jussi drank cocacola – at his own risk, Nils said. In truth a unique concert.”