Jussi of the Month February 2017

In February of 1951 Jussi Björling had been in the USA since October of 1950 together with Anna-Lisa. He had first sung at the Metropolitan, opening the season in a new role, as Verdi’s Don Carlo. This performance marked the beginning of Rudolf Bing’s leadership. Later the couple set off on a tour and on Februrary 2nd, when Jussi celebrated his 40th birthday, they were in Montreal for a joint concert, Jussi’s third there.

Jussi was interviewed later about that day by Aftonbladet and he recounted that they were almost snowed in at the railway station. “That was one of the worst snowstorms Montreal ever experienced and the traffic was completely paralyzed. Not a single taxi was available and we struggled in snow up to our knees from the station to the hotel.” The former Met director, Edward Johnson, who had returned to his native Canada after he retired, had come to Montreal to celebrate and he invited them to lunch, where he and Anna-Lisa sang “Happy birthday to you.” The newspaper also mentioned Jussi’s happiness about a beautiful proclamation sent to him by the Stockholm opera standees club, which is now seen in the Björling Museum. About the concert itself, a reviewer wrote that “Jussi Bjoerling’s admirable tenor voice is still in good form” and that “the audience appeared to be more than satisfied.”

Advertisement for the Detroit concert

One week later, the 9th, the Björling pair and pianist Frederick Schauwecker were back across the border for a solo concert in Detroit in a hall where ”such numbers and enthusiasm have not often been noted”. Jussi was described in the Detroit News as “a roly-poly chap, with that basic boyishness of aspect enjoyed by some lucky fellows who look much the same in middle age as they did at 14.” The multicultural aspect of the Martha aria on the program was stressed in the review: “a Swedish singer, singing in Italian a song from an English opera by a German composer, and for an American audience.”

From Detroit the Björlings traveled to Denver where the singing couple was united again on the stage on February 12. The concert had assembled about 2000 people even though they too were hit by a powerful snowstorm. The Denver Post hailed Jussi’s “controlled power, richness of tone and completeness of projection” and “plentitude of voice,” and found Anna-Lisa’s “charm and winning simplicitude” striking.

On February 16 the couple was back in New York for a tv program, We the People, where Jussi chatted with Caruso’s widow Dorothy, and sang Vesti la giubba in costume. During the conversation, Jussi narrated how he and his brothers had missed the chance to hear Caruso. Time Magazine reported on the meeting, “In Manhattan, Enrico Caruso’s widow Dorothy finally came right out and said that the only living tenor who comes close to wearing ‘Rico’s’ crown is the Metropolitan Opera’s Swedish-born Jussi Bjoerling. Said tenor Bjoerling: ‘The greatest moment of my life.’” 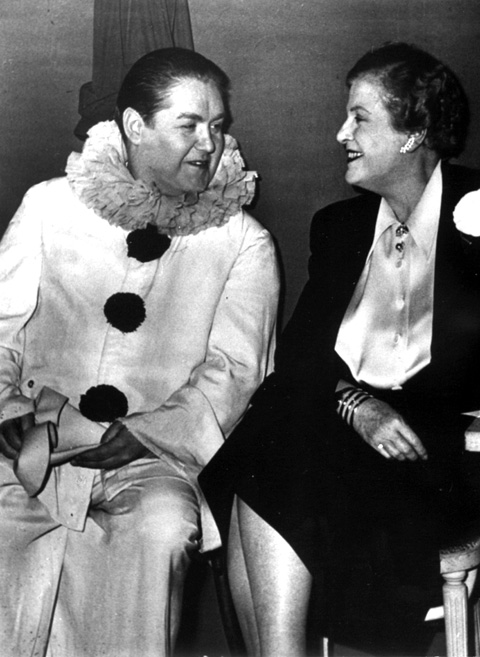 Jussi and Dorothy Caruso at the recording of We the People

From We the People (source WHRA-6036, Jussi Björling Live). Click to hear:

Three days later, on February 19, the Björlings had traveled South, and Jussi was alone on the stage in Columbus, Georgia. The Columbus Ledger verified that he “lived up to his name of ‘the world’s greatest living tenor.” “As the golden notes of a rarely beautiful and flexible voice filled the auditorium with thrilling music, the audience responded with enthusiasm that turned into an almost wild acclaim as his voice soared with effortless ease into the dramatic and taxing arias.” The organizer was praised by the newspaper for having “never presented a greater artist in a more beautiful program.” 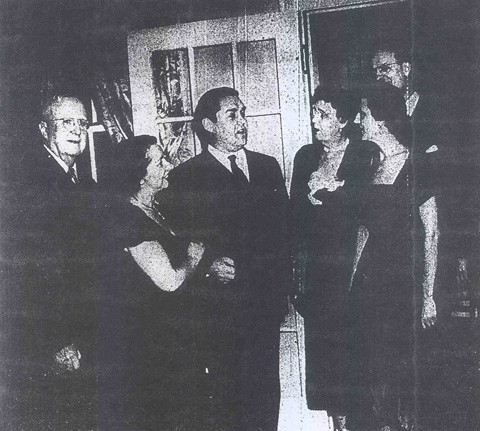 Jussi with concert-goers in Columbus. Accompanist Frederick Schauwecker at the extreme right.

Jussi and Anna-Lisa came back North for two concerts in Illinois, the first a joint appearance in Urbana on February 22. Jussi’s solo concert in Chicago on the 25th was reviewed by one of the best-known American critics, Claudia Cassidy. She wrote in the Chicago Tribune from 1942 to 1965, and she could be  sharply critical, sometimes referred to as “acidy Cassidy” for her column “On the Aisle.” She had no doubts about Jussi’s greatness, something evident from a series of 23 reviews written between 1937 and 1958 now readable in the Björling Museum. Those end with the 1960 obituary. Her review from February of 1951 will be extensively quoted from.

Jussi also filled the stage of Orchestra Hall, which otherwise had room for more than 2500 people, and Cassidy stressed that this was not because he was a new sensation or media idol, but because he was “a great singer with what must be the most exciting voice in the world today.”  She went on with an unusual technical comparison to describe Jussi’s singing: “He is not a large man and when he begins to sing… he seems to have set off a dynamo of giant dimensions which has turned him into a resonator. But you forget that almost instantly because you have been absorbed into his magnetic field. The dynamo isn’t running Bjoerling – Bjoerling is in full control of the dynamo.”

Cassidy thought that Jussi “would have been extraordinary in any age, for topnotch tenors are scarce articles. But in our time he verges on the fabulous. … Bjoerling is the first tenor I have known who is just as happy in the mezza voce etching of ‘Le Rêve’ as in the vaulting ardour of Donna non vidi mai.”She expressed her gratitude for his “tacit acceptance of the fact that the greater the gift the greater the responsibility. He walks onstage like a man without a care in the world. That beautiful voice, as shining in stratospheric brilliance as it is poignantly veiled in shadow, has been polished to technical perfection. His standards of interpretation are the highest, being informed, imaginative, and patrician. In performance he is both generous and eloquent, but he has an instinctive serenity, a rocklike inner reserve. He is a vastly popular singer who maintains the aristocratic art of song.”

When Jussi finished his February performances on the 27th in Buffalo, there was another female reviewer, Theodolinda Boris, who seemed to compete with Cassidy in stressing his unique position. Boris called the concert in Kleinhans Music Hall “a revelation in the art of singing. He is unique and unrivalled among tenors of today in the God-given beauty of his voice. It is all gold and velvet – liquid gold on top and dusky velvet in the middle and low tones.” He had “amazing breath control,” and was “faultless in vocal production.” “Rhythmic accents, dynamic and color shadings, molding of phrases and an ever-smooth legato are handled with near-perfection.”

Jussi and Anna-Lisa’s American tour would this time continue until March 12.