In March 1953 Jussi had, together with music journalist Teddy Nyblom, planned a tour of France and Great Britain with both opera appearances and concerts. Unfortunately Jussi contracted throat problems, and his long looked forward to debut at the Paris Opera in his signature roles as Faust and Romeo had to be cancelled, to the great disappointment of the Parisians. 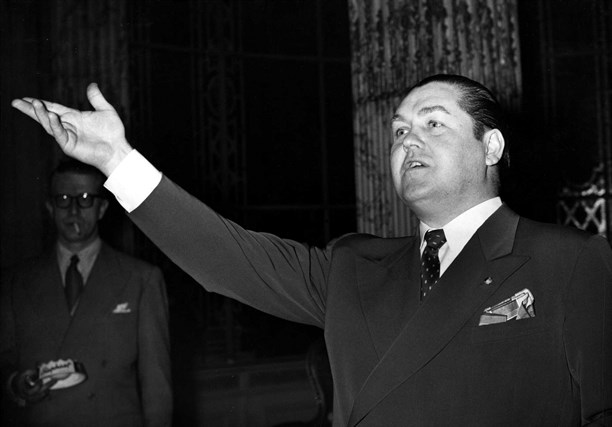 The third undertaking in the French Capital he was however able to carry through. It was in connection with a large press gala at Théatre de Paris on 12 March with a lot of celebrities in the audience. Both President Auriol and Cabinet President René Mayer were there. Jussi was assigned to sing the Flower Song and Because, but the ovations were so great that he sang two encores: Grieg’s En dröm and Mattinata by Cavallo (sic!) Stockholms-Tidningen’s reporter wrote. He also thought that Jussi wasn’t “perhaps in his best form and the acoustics were far from ideal.” Le Monde established anyway that Jussi “launched Grieg’s dream with a voice of Nordic sun.” Listen to En dröm från 1952 (Naxos 8.101 101):

During the interval Jussi met President Auriol “who complimented him for his glorious voice and his brilliant interpretation. When the president learnt that Jussi didn’t speak a word of French, he was stunned about the impeccable French he sang in the Flower song. The president also complimented the charming Anna-Lisa.” 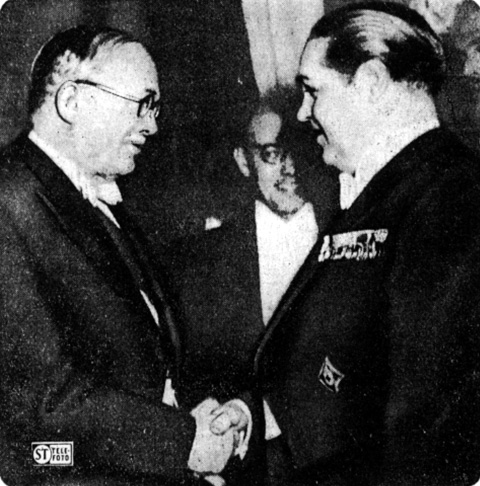 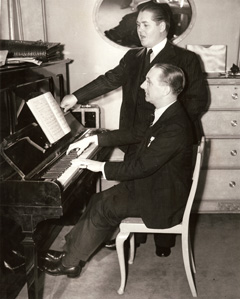 Ivor Newton and Jussi 1937
After this they headed for Scotland, where Jussi appeared in St. Andrew’s Hall in Glasgow on Tuesday 17 March. At the piano was Ivor Newton, who had accompanied Jussi as early as November 1937 and after that supported him on every occasion when he visited Great Britain and also during the South Africa tour in 1954. The programme followed the usual pattern: an opera aria, this time Lensky’s, followed by three Schubert songs, two by Brahms and two by Richard Strauss plus Celeste Aida before the interval. The second part was all-Nordic: three Grieg songs, one each by Alfvén and Peterson-Berger and last two by Sibelius. After that followed two request items, the well-known arias from La bohème and Turandot. But it didn’t end there. Another half-dozen songs Jussi had to sing before the audience was satisfied.

Particularly satisfied wasn’t, however, the reviewer in Glasgow Herald. “Operatic Tenor Disappoints” said the header of his review. This was Jussi’s second visit within a few months. He had been there in November the year before and the programme was similar to what he sang that time. “But there all similarity ended. Mr Björling was not in his best form last night. True, he gave his audience some delightful singing in Schubert’s The Trout and serenades by Brahms and Richard Strauss – in fact, his best work was done in the smaller forms. But his operatic items, where one could have expected him to be completely at home, were marred by a hard, steely tone on the high notes, clipped phrases, and a disturbing unsteadiness in places. His best was the Harlequin’s Serenade from Pagliacci. The inevitable Sorrento and Donna è mobile completed the concert.”

When Jussi and Anna-Lisa arrived in London preparations for the coronation of Queen Elizabeth in June were in progress and the concert venues competed with well-known artists. When they checked in at Savoy Hotel they bumped into Beniamino Gigli, Maurice Chevalier and Charlie Chaplin. It turned out that on 22 March, when Jussi was to sing in Albert Hall, Gigli was to sing a matinée performance at Royal Festival Hall, then fairly recently opened. “Not a bad combination”, said Gigli, “a Björling and a Gigli on the same day!”

The programme in Albert Hall was identical with the programme in Glasgow. The programme booklet was lavish with a large photo of Jussi, extensive biography and even a pronunciation instruction: Yoosi Bee-url-ing. 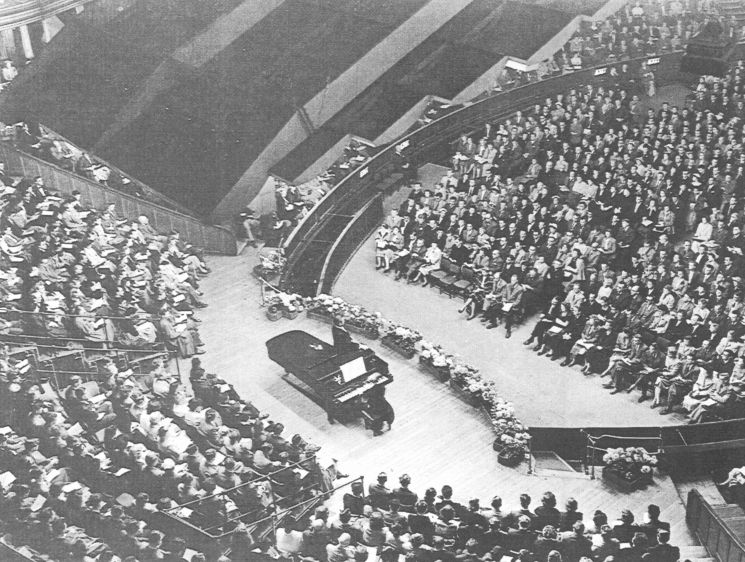 On the front of the programme one could read NO SMOKING –NOT EVEN ABDULLA. Abdulla was a cigarette brand that offered various exotic tobacco blends, Egyptian, Virginian, and Turkish. Obviously Abdulla cigarettes were regarded as less harmful than other brands.

The Times had a short and not too appreciative review. “It is Mr. Jussi Björling’s voice that attracts huge audiences, not his programme, which consistently runs to pattern, nor even his interpretative musicianship, which sometimes falls short of distinction. Last week he attracted a great throng to the Albert Hall, where he was singing familiar Lieder by Schubert and Brahms, songs from Scandinavia and Finland and the favourite tenor arias from opera. He brought to them all a friendly manner and a firm, ringing voice, not greatly variable in colours, nor as large in volume as his gramophone records pretend, but pure in quality and exquisitely controlled.”

Teddy Nyblom was of course as tour coach somewhat exceptionable but he was in spite of that allowed to review the concert in Aftonbladet. “Jussi Björling had his greatest London success yesterday at a concert before a sold out Albert Hall, which means around 10,000 people.

With excellent voice and relaxed interpretation, which we seldom hear at home, he sang a two-hour-programme, which among other things contained songs by Schubert, Brahms, Grieg and Sibelius and opera arias from Tosca, Onegin, Pagliacci, La fanciulla del West, Turandot, Aida, Bohème and Rigoletto.

He will return to London for two concerts in connection with the coronation on 8 and 15 June and in between he pops over to Paris to fulfil the two performances at the Opéra, as Faust and Roméo, which he unfortunately, due to his bronchitis, missed this time.”

Unfortunately his throat problems continued during the spring and he had to cancel a lot of concerts. The two concerts in London he could carry through but the Paris appearances he was forced to cancel also this time.