April 1949 meant the end of a long American tour for Jussi and Anna-Lisa Björling. For Jussi, it had begun in October of the previous year (his wife joined him later). Jussi had sung with the San Francisco Opera and with the Met in New York,  also on tour with both companies. As usual he had a full schedule of concerts and on a few occasions he had been joined on stage by Anna-Lisa.

The month’s program began on April first with a concert in Wheeling, WV. The reception was heartfelt, the applause “of the type tendered to what might be truly called a great artist.” The reviewer, who had got the idea that it was Caruso who brought Jussi to America (which would mean that he could not have been older than 10; perhaps he was somehow confused by David’s tour), didn’t spare the praise. Jussi “demonstrated all that has been said about his soaring lyric tones which enrich the productions of the Met, demonstrated his ease in sustaining the pianissimos that have a three-octave range and proof that he can handle the light side of music as well as the more robust types with the facility for which he is famed. He is a hard-working and sincere singer and a man of marked contrasts.” 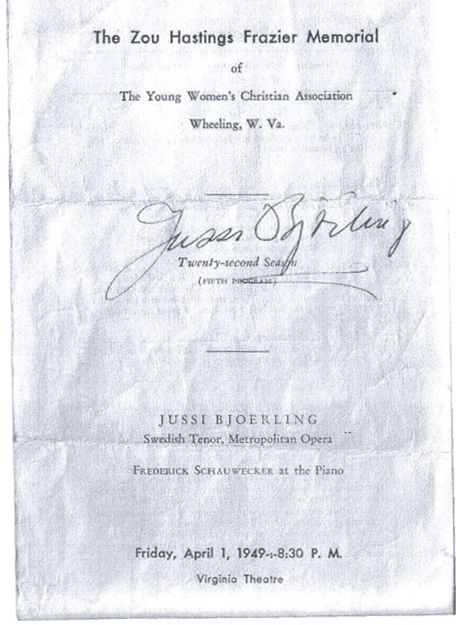 April 4th was the date for the broadcast of Telephone Hour from Rockefeller Center in New York, the second time that season in which Jussi took part in the program. Donald Voorhees was the conductor, as usual. Schubert’s Ständchen from that occasion is the only recording where Jussi performs that song with an orchestra.

On April 7th, Jussi sang his last opera performance that spring, on tour with the Met in Cleveland. He appeared in Rigoletto with Lily Pons as Gilda and with Leonard Warren in the title role. Jussi “carried out the part of the duke with brilliant elan. There were admirable firmness in his voice and fine body in his high notes. …his singing in general had the benefit of of a live musical intelligence and a strong feeling for dramatic effect.”

Rigoletto was the only opera where Jussi sang with the French-American soprano Lily Pons. The first-day cover of a new stamp shows how well-known she was: 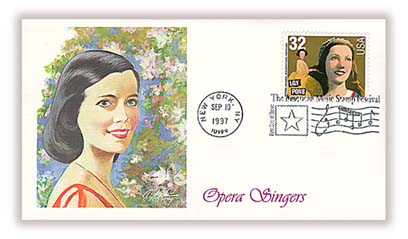 The last program before the Björlings’ trip home was the all-Swedish gala concert Sweden in Music at Carnegie Hall on April 11th, the largest of the several benefit concerts Jussi gave for Swedish organizations in America. This time the profits went to the Swedish Seamen’s Welfare Fund, and two other Swedish Met stars, Joel Berglund and Karin Branzell also participated. They sang with orchestra, while Jussi performed songs with piano accompaniment.

On the morning of Monday, April 25, Jussi and Anna-Lisa arrived in Gothenburg on M/S Gripsholm. They had learned on the ship that fellow tenor Beniamino Gigli would sing there that evening. Jussi considered staying in Gothenburg to hear Beniamino, but they wanted to get back to their children. Jussi still found an occasion to meet Gigli, with journalists trailing him to the Grand Hotel. “Hallo my old friend Ben! How do you do? – Oh how do you do? Glad to see you!”, was quoted by a newspaper from the warm meeting. “There were not two rival divos who met, but rather two world-famous singers who know that there is room for both under the sun.” Then the tenors and their followers went to Waidele’s music store, where they listened to each other’s records and signed autographs. 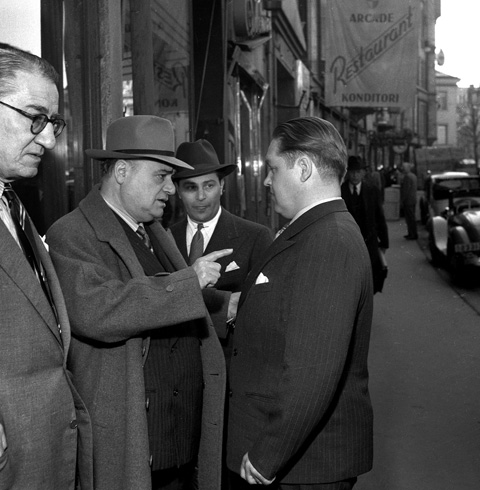 Jussi was quoted after returning to his Nybrogatan apartment on Monday evening: “It is incredibly wonderful to be home again. Nobody can have an idea of how tiring it is finally to tour around in America. Seven months at a time is too much, two could be enough, and I long to make a European tour for a change.” 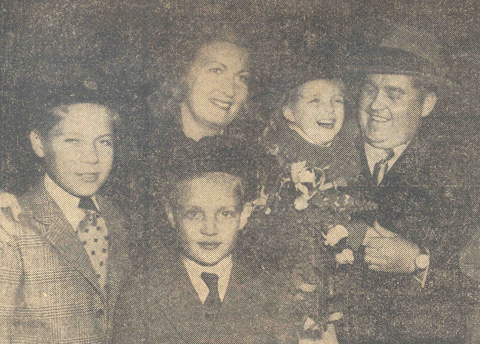 Jussi and Anna-Lisa welcomed by their children in Stockholm