In January of 1941 Jussi had been in America since the previous October, for the first time without Anna-Lisa who had stayed home with the children. At the Metropolitan he had made his debut as Gustavus III (Riccardo) in Ballo on Dec. 2, and in January led off on the 8th with his 5th performance there of the same opera. As with the premiere and the broadcast of the December 13th perforamnce with Ettore Panizza conducting, Zinka Milanov sang Amelia and Stella Andreva Oscar. In January, Kerstin Thorborg sang Ulrica as she had at the premiere but not on the broadcast, and Francesco Valentino took over as Renato, following Alexander Svéd.

January 11 was the date for Jussi’s third performance of Trovatore during that season. Luckily it was a Satuday matinee which was broadcast on the radio and therefore has been preserved. Although Jussi had made his Met debut already in 1938, Trovatore and Ballo in the 1940-41 season were his only Saturday matinees there before he limited his career to Europe during WWII. Thus, they are his only performances from that period which we can listen to today. 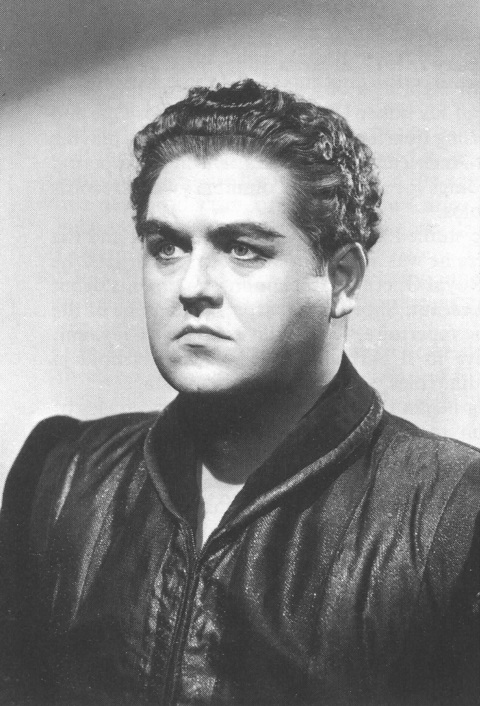 The three Trovatore performances were conducted by the Argentinian Ferruccio Calusio, who would work at the Met only in that one season, and Leonora was Norina Greco. She was born in Italy but grew up in Brooklyn, and she replaced Stella Roman, who couldn’t come from Europe. Francesco Valentino sang Di Luna and Bruna Castagna was Azucena, as they had been at the first performance on December 12. Valentino was an American who was trained and made his debut in Italy, and therefore “Italianized” his name. Ballo and Trovatore that season were the first operas he sang opposite Jussi, but they would be paired many times in different roles after the war. 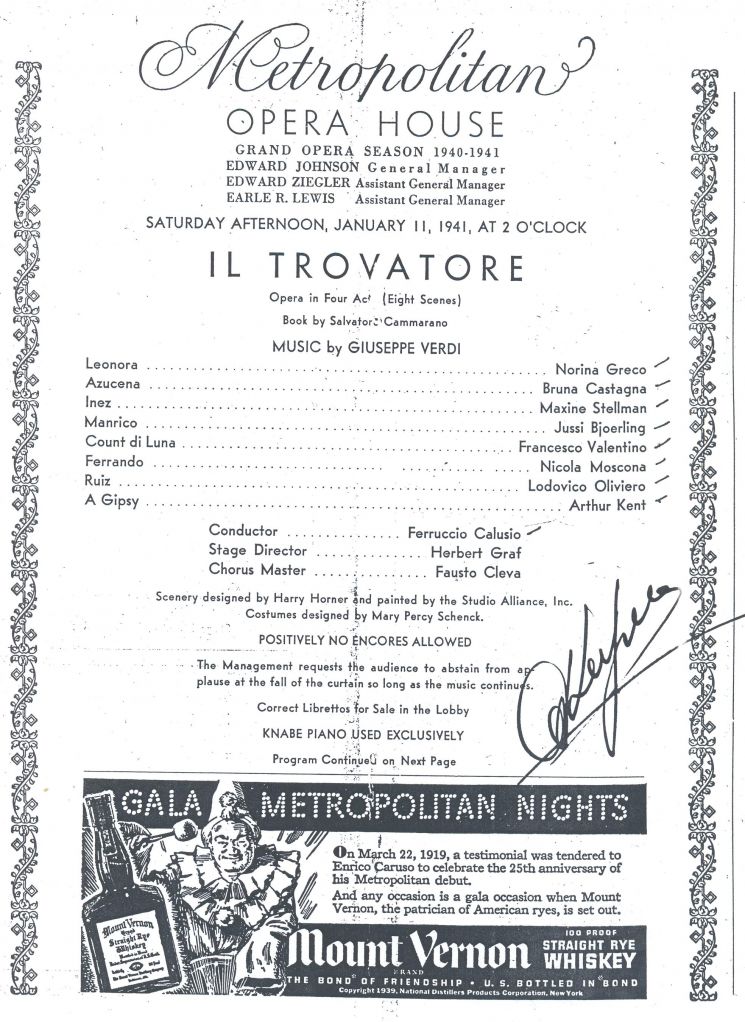 Program for the January 11 Trovatore performance. (The handwritten notes indicate that it was copied from the Met archives, confirming that there were no changes.)

In his monumental Saturday Afternoons at the Old Met, Peter Jackson’s analysis of the performance on the whole is mixed about Greco, negative to Valentino but full of praise for Castagna. As far as Jussi is concerned he thinks that the role as Gustavus fit him still better; Trovatore demanded “almost more vocal brawn than he can muster, but he doesn't stint … In the more ingratiating moments of the score he reveals his special assets. One treasures the easy lift of the voice as Bjoerling moves up the sequential phrases of the act-one serenade and rounds them off with an unbroken final phrase – here is a minstrel who can actually sing. … All the scenes with his 'mother' are on the highest level. And 'Ah sì, ben mio' is magical, delivered with a lovely head voice which he allows just the right amount of sunny brilliance to penetrate the climactic phrase – then he pieces into the cadenza a startling 'la morte' (forte) in the upper range."

Click here to hear Jussi and Castagna in “Mal reggendo”

This Trovatore is highly regarded by critics and has been issued four times on LP and twelve times on CD, most recently during the summer of 2017 on the Pristine label. According to Stephen Hastings, it is a “performance of unflagging theatricality” and Jussi gives "in many ways his most dramatic reading of the role."

After the Met performances Jussi gave two concerts during January with Harry Ebert as accompanist. The first of those took place on the 24th in Chapel Hill, North Carolina. 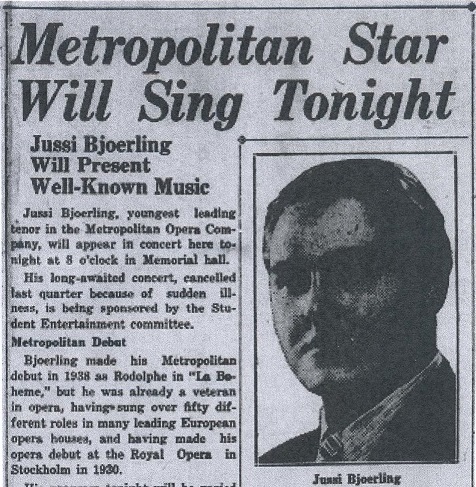 Jussi finished January with a concert on the 31st in Town Hall in New York. 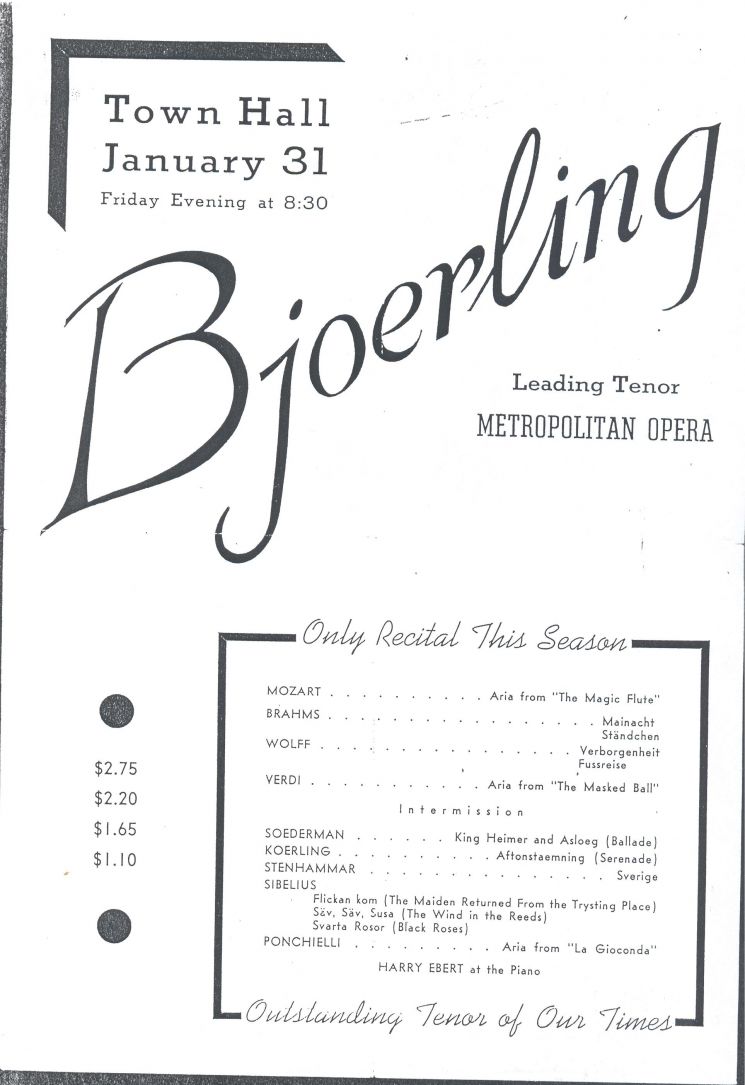 Program for the New York concert

In New York, Town Hall was not sold out, but the public was enthusiastic and Jussi was forced to provide 10 encores. After the intermission, he substituted the Swedish songs on the printed program with American ones: “A Dream” by Bartlett, “Ah, Love, but a Day” by Beach and “Will o’ the Wisp” by Spross. However, the Sibelius songs were retained. The reviewers agreed that the Mozart aria and the lieder at the beginning did not offer the same rewards as what followed, even if, as Musical America wrote, it "was excellent as to tonal quality and vitality." According to Francis Perkins in the New York Herald Tribune, Jussi gave “several examples of his best singing, but took some time to reach his most notable vocal form.” Starting with the first opera number, “Di’ tu se fedele” from Ballo, followed by the Carmen aria as an encore, the concert acquired "propulsive spirit and expression conviction."

Olin Downes in the New York Times thought that Jussi showed how an opera tenor "meets successfully the tests of the concert room," something not always happening. Later he mixed appreciation of Jussi’s singing with criticism of his program. "He demonstrated anew his knowledge and his admirable observance of the laws of song, in the skillful employment of a voice which is brilliant without hardness in the upper octave, and warm and beautiful in the lower register.” But Downes was unimpressed by the Sibelius songs, which in his opinion were not on a level with the composer's orchestral works, and “the awful songs of the American group" he described as "melodic drivel." He ended: "A singer of such capacities should have given us a better program."

The reviewer in the New York Post, on the other hand, found that the “haunting beauty” of the Sibelius songs showed Jussi "to especially good advantage as an interpreter." And, "whatever one thought of the selection comprising the English group, there was no denying that they got the best treatment."

After the New York concert, there remained two Met performances and a number of concerts before Jussi returned to Sweden in March of 1941. Not until October of 1945 would he return to his American career.