In the Autumn of 1950, Jussi and Anna-Lisa Björling came to the USA in October, and he had sung until January at the Metropolitan (where Rudolph Bing was the new general manager). He had, for instance, sung in a new role, Verdi’s Don Carlo, at the season opening in November. After touring in the US and Canada, he was then back on March 3 to New York for his only concert of the season in that city.  That was the second of his 6 total concerts at Hunter College, and as usual, he was accompanied by Frederick Schauwecker. 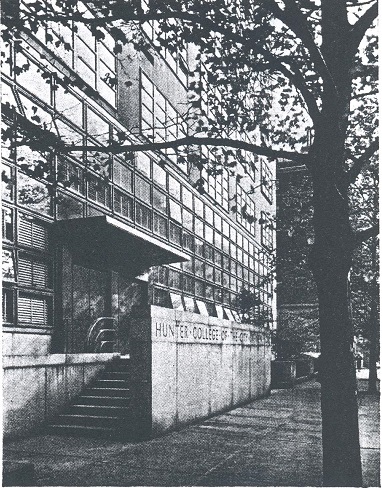 Entrance to the Hunter College auditorium

The New York Times stated that the weather was very bad but the room well-filled. As to the opera arias, ranging from Don Giovanni (Dalla sua pace) to Turandot, Manon, Manon Lescaut, and Lohengrin, the paper described them as  "consistently in good taste, unpretentious and of commendable respect for musical values," and showing "much of the lovely, rich-colored quality for which he is famous." The public cheered Jussi after the dramatic high notes in the Puccini arias, but the reviewer was still more impressed by the less showy  songs by Sibelius and Grieg,  two encores ("Tonerna" and a Strauss song) and by an English group.

Musical America praised the interpretations for ”expressive conviction” with a tone which was "prevalently pleasing, especially in its fluent and well-focused middle and lower notes; occasional whiteness was noticeable in the upper register."

For the sixth time during that tour, Jussi sang with Anna-Lisa on March 6, when they gave a concert in the art museum’s peristyle in Toledo, Ohio. 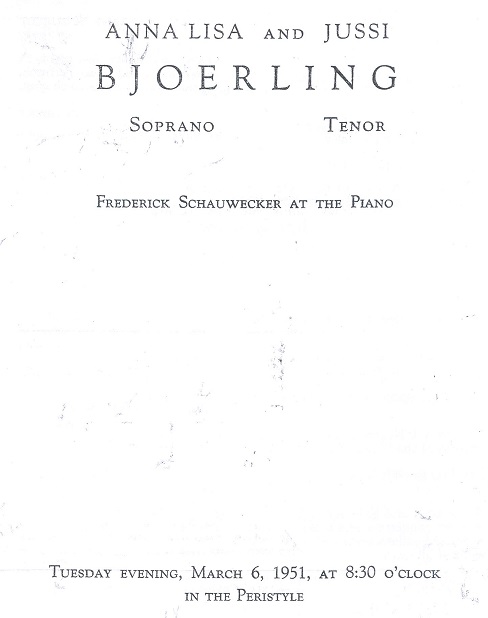 Program cover for the Toledo concert

A Toledo newspaper called the concert "at once an artistic pleasure and a professional lesson in competent singing."  In the opening lieder group, Jussi was “searching and tender” but his “magnificent vocalism” was most striking in the Martha aria. The reviewer praised Anna-Lisa’s middle register but thought her top notes were anemic, even though she was "innately musical and her technique is without serious reproach."

On March 9, Jussi was back in New York to continue a series of recordings with the new tape technology and with the Italian Renato Cellini as conductor, which had been begun the year before. This time, he recorded new versions of arias from L’africaine, Faust and Pagliacci. Faust’s cavatina “Salut! demeure chaste et pure” is one of his best versions of that aria. Stephen Hastings points out how perfectly his voice blends with the solo violin, which requires two skillful musicians.

Jussi ended his American tour with a radio broadcast of the Bell Telephone Hour on March 12 from Carnegie Hall. That was the seventh and last time he  appeared in that series, where he had sing since 1948, always with Donald Voorhees as conductor. The American radio networks wanted Jussi to do something in English, and since the Irish national day, St. Patrick’s Day (March 17) was near, and is much celebrated also in the US, this time he sang "The Rose of Tralee," a song with an Irish topic. The song was probably composed by the Englishman Charles Glover, but it was a favorite of Irish tenors such as John McCormack. As far as we know, Jussi only sang it on this one time, and therefore it’s especially valuable to have a recording from that occasion. 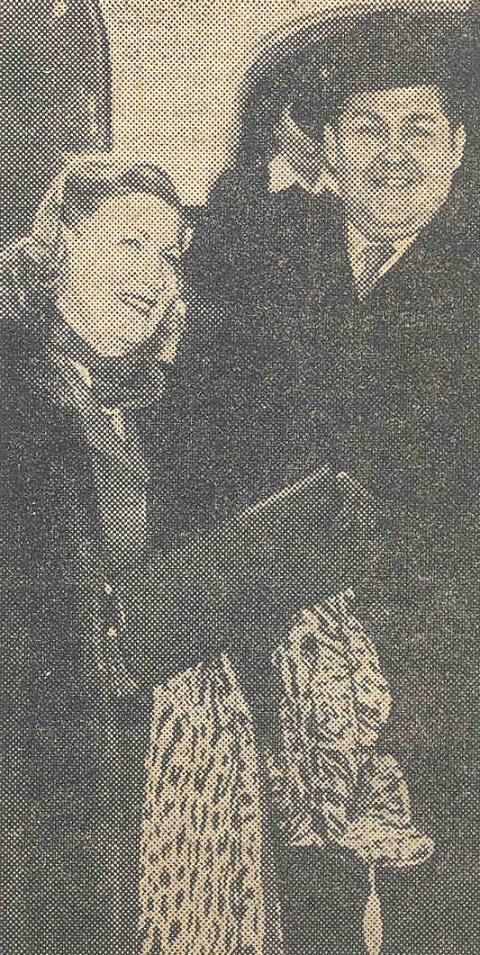 On March 15, Jussi and Anna-Lisa came to their home in Stockholm via Bromma airport. In front of  the press which visited him at home, Jussi played test records from his sessions with Cellini, and explained that he had come home to squelch any rumors that he planned to be an American citizen (and to pay his Swedish taxes!). He recounted that in June he would record a complete Carmen under Fritz Reiner with Risë Stevens as Carmen. Alas, it never happened: the following month, Jussi abandoned the project since he didn’t think he could learn an opera that he had never sung in such a brief period of time, considering his other obligations. The recording went forward with Jan Peerce as his replacement. 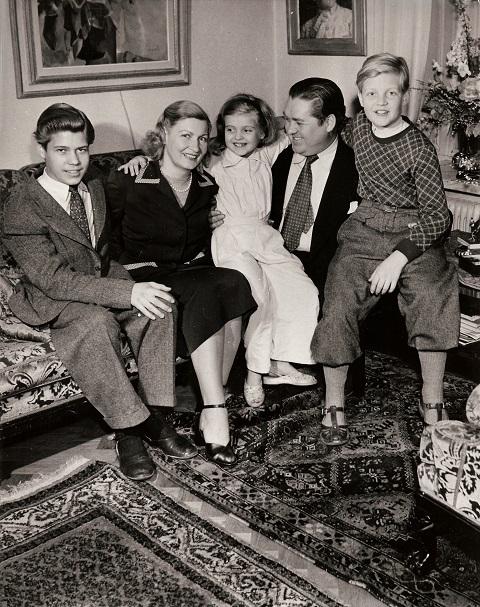 The whole family gathered before the press at home at Nybrogatan