Jussi of the Month November 2018

After a long an intense spring season 1959, which began at the London Palladium on 4 January and was finished at the Royal Albert Hall on 31 May, and in between encompassed numerous travels across the American continent, Jussi was in need of winding down during the summer months. Besides a couple of minor assignments in the Town Hall, the traditional singing at Skansen on the National Day of Sweden and a concert at Gröna Lund, the amusement park in Stockholm, he was able to spend his time with his family at Siarö and catch a pike or two in the Siarö Strait. There was also a break for the recording of Puccini’s Turandot, together with Birgit Nilsson and Renata Tebaldi in Rome in July. 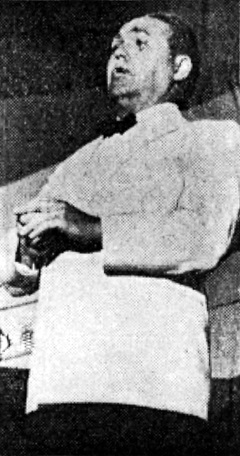 Gröna Lund 20 August 1959
In late summer some new tasks were in the pipeline, but things didn’t turn out as expected. On 12 August the Stockholm newspapers could report that Jussi Björling had been stricken by a heart attack at Bromma Airport, when he together with Anna-Lisa was heading for Gothenburg for a concert at Liseberg, news that also reached the USA, where New York Times had a paragraph about it. The attack was however not too serious, and after a few days’ rest he was able to carry through a concert at Gröna Lund, the second this year.

The concert was recorded and no one listening to it can imagine that he wasn’t in top shape.

The critics of the dailies were also overwhelmed. “Rarely has Jussi Björling been heard in such brilliant shape”, said Dagens Nyheter, and several of them made a note of the fact that he “by request” performed a revue song. Now, this wasn’t any revue song but “Ich hab’ kein Geld, bin Vogelfrei” from Millöcker’s The Beggar Student. A writer with the pseudonym Marja was in her most picturesque mood: “The mixed grey shades of the sky didn’t discourage the audience; people came flocking in multitude. Elbow to elbow they applauded, old as well as young, shouting ‘bravo’ with such glow and conviction that a Southern European would have felt at home and not among strict Swedes in the cold North. A Swedish-American in broad-brimmed hat wasn’t ashamed of openly wiping a tear from his eye, when Jussi Björling sang lofty patriotic songs, making the loud-speakers and the patriotic hearts almost burst to pieces.”

But a few days later, the day before a planned concert at Skansen, he had a new attack, and this time he was brought to the Red Cross Hospital, where he was hospitalised for more than a week. In early September he was back home. “Quite recovered”, his daughter Ann-Charlotte informed. No further appearances were planned, apart from another opera recording in Rome at the end of September. This time it was Puccini’s Madama Butterfly opposite Victoria de los Angeles. The recording sessions went well but in the big love duet Jussi collapsed, possibly due to the heat in Rome at the time. The recording was in 1961 awarded a Grammy for the best opera recording of the year. 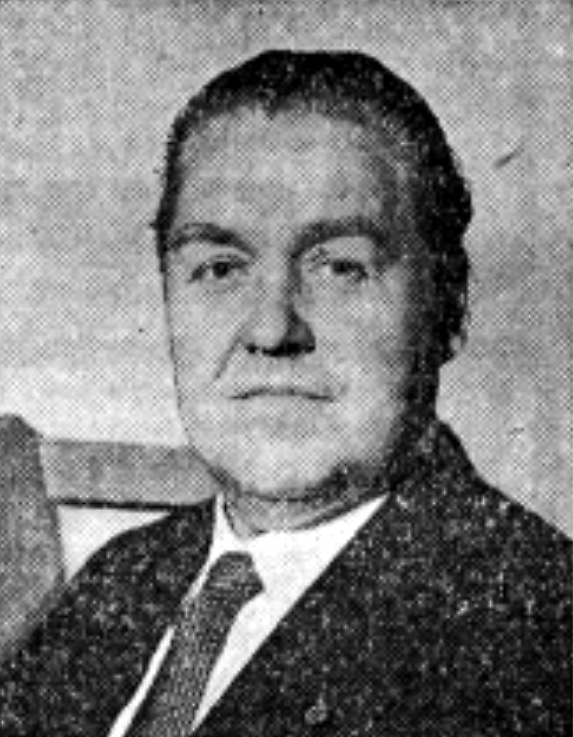 Portrait 14 oktober 1959
On 15 October Jussi gave a concert in the newly opened Falkoner Centret in Copenhagen, and the Danish newspapers had large interviews with him. The concert was recorded and the original tape was found a couple of years ago. It was issued on a CD which attracted a lot of attention. As a matter of curiosity can be mentioned that Jussi after the concert at Kastrup Airport bumped into another legendary musician, the clarinettist Benny Goodman. Danish television was

there and filmed a snippet where Jussi and Benny are jamming together.

After these preludes we reach November 1959, which this article was supposed to deal with. On 1 November the Stockholm opera gave a Sunday matinée of Puccini’s Manon Lescaut. Jussi stood in for Einar Andersson and sang opposite his most frequent duet partner Hjördis Schymberg and in the pit was Jussi’s favourite conductor Nils Grevillius. The opera was also broadcast live by the Radio Theatre and in the first interval Jussi was interviewed by Bo Teddy Ladberg and told about his many international guest appearances. The radio listeners enjoyed both the interview and the singing and the critics in the audience had only good things to say about the performance. But Jussi’s health was precarious and his colleagues on stage were anxious about his physical state. The chorus were so concerned about him that they had problems to convey the exhilarated atmosphere of the opera’s first act. Hjördis Schymberg remembered that Jussi didn’t kneel down in the last act as he used to do; he just sat on a piece of rock. “I recall lying there leaning against his chest. I could feel his heart beating so incredibly violently underneath the heavy costume. He must have felt very uncomfortable but he still sang a brilliant performance.” His colleague, mezzo-soprano Gertrud Pålson-Wettergren heard the performance on the radio and afterwards phoned to the opera and spoke to Jussi. She wanted to congratulate him for his excellent singing. He was extremely happy about this and thanked her warmly. But when she met him at the NK department store, she too noticed how wan he looked. He’d been dieting and the weight loss showed in his face. She warned him: “Jussi, it isn’t good to diet too much.” He smiled pensively and replied: ”I’m not going to grow old either – like Gösta.”

But still he had strength. He was contracted for eight performances at the Metropolitan Opera in New York during November and December. He hadn’t appeared there since the beginning of April 1957 and expectations were high before his comeback. On 16 November he was back on the stage. Richard Lewis wrote in the December issue of Musical America: 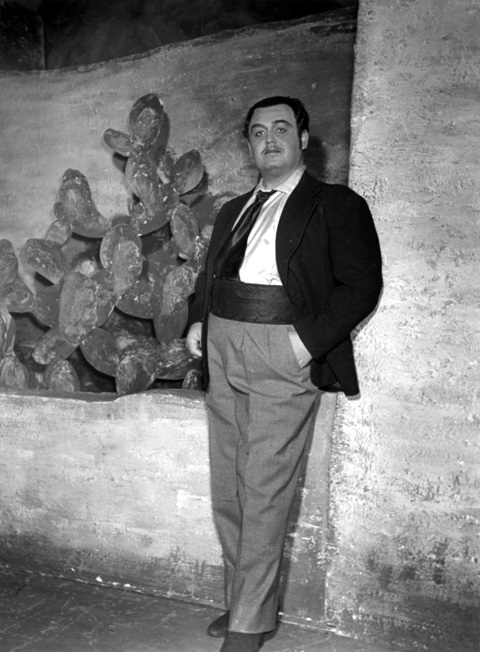 Jussi as Turiddu, Stockholm 1954
“No victorious Caesar returning to Rome could have produced a greater ovation than that which greeted Jussi Bjoerling when he made his entrance as Turiddu in "Cavalleria Rusticana." The opera came to a standstill, and the audience gave forth an explosive bravo that even now continues to linger as a reminder of a performance which was transcendent and electrifying.

Mr. Bjoerling, who has been absent for two years, is one of the great tenors of our time. His clear and beautifully focused voice, even when heard in the Prologue behind the thick curtain, could ecstatically project a refined expressiveness, all-embracing in its warmth. His dramatic sense is unerring, and his ability to portray the nuances of a character equally acute. One will not forget the pathos in Mr. Bjoerling's voice, when, foreseeing that he will die in his duel with Alfio, he suddenly becomes a trembling child and asks his mother to bless him and protect Santuzza. It will be a long time before we hear another duet like the one Mr. Bjoerling sang with Giulietta Simionato - a duet which steadily grew in its elemental passions until, at the end, it left the audience mesmerized.

The whole performance, with Miss Simionato as Santuzza, Rosalind Elias as Lola, Walter Cassel as Alfio, Thelma Votipka as Mamma Lucia and the beautiful conducting of Nino Verchi, set off Mr. Bjoerling's homecoming in a manner befitting an historic occasion.”

Cavalleria was played also on 27 November, but this time with Zinka Milanov as Santuzza. In between Jussi also sang in Tosca on 21 November. His Tosca was Maria Curtis Verna (1921 – 2009), American soprano who started her career in Italy but returned to the USA in the 50s and made her Metropolitan debut in 1957. Scarpia was sung by Cornell MacNeil (1922 – 2011), also American and one of the foremost Verdi baritones in the 60s, 70s and 80s. Both singers were in good form but it was Jussi’s contribution New York Herald Tribune’s reviewer focused on: “The Swedish tenor’s singing was vocally appealing and also fulfilled the emotional demands of the music. Early in the first act the quality seemed slightly tense, but Mr. Bjoerling showed his customary command of ring points of vocal shadings. His defiance of Scarpia in the next scene was ringing and proclamative, prefacing an unusually convincing tussle with Scarpia’s henchmen, while ‘E lucevan le stelle’ was admirable for its tone, artistic taste and expressive persuasion.”

In December Jussi sang another two Tosca performances and one Cavalleria, in addition two Faust where his Marguerite was Elisabeth Söderström, but about that I have written in a previous article (see “Archive” Jussi of the Month December 2015)