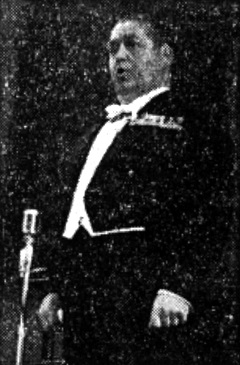 Jussi at Skansen June 6, 1956
Jussi had spent most of the autumn, winter and spring in North America and among other things taken part in the legendary recording of Puccini’s La bohème in New York together with Victoria de los Angeles and Robert Merrill and with Sir Thomas Beecham as conductor. An appearance in Albert Hall in London in May has also been on the agenda before June dawned. Then he was thoroughly rested and could with confidence look forward to the traditional celebration of the Swedish National Day at Solliden at Skansen on 6 June. That Jussi was in top shape was confirmed in all the reviews that are preserved in the archive of the Jussi Björling Museum. I confine myself to quoting Lennart Swahn’s as usual so witty report:

“One is always so happy on behalf of the national singer honour, when Jussi BJörling comes home from abroad and proves that he sounds as good (sometimes better) than before. Festival audience and the old Stockholmian Jussi Fan Club, partly wrapped like stuffed cabbage rolls in their blankets, greeted the order decorated world singer with the heartiness that always is so mutual when it comes to ‘our Jussi’.

While noting that the loudspeaker problem outdoors seems insoluble, there is every reason to assure those who were not there yesterday that the Royal Court Singer has not overworked himself during the season passed. The Graal narration, En dröm, Jungfrun under lind, a table spoon Italian, Land, du välsignade and Because – was the traditional vocal menue, served as elegantly and modestly as usual. And everybody was happy. Not least about maestro Ehrling who was the accompanist and Julius Jacobsen as an over qualified turner and water glass-holder.

Now one remembers that Set Svanholm has subscribed for the role of Don Carlos at the Royal Opera Gala on Saturday. No bad words about the new opera director, but wouldn’t Jussi have been a man for Elizabeth? The vocal pride of the nation! One never knows about Jussi but it seems unlikely that the perch at Siarö would be more attractive than the Queen of England.” 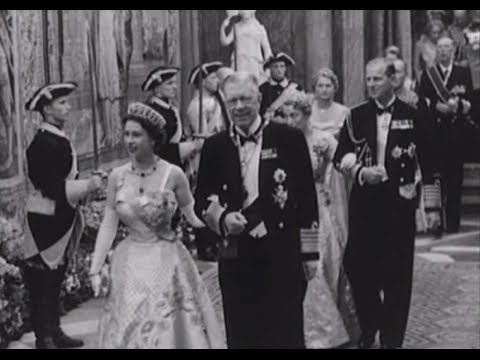 State visit 1956 by Elizabeth II
Yes, there was a state visit coming up, but probably Jussi was probably still satisfied to travel out to Siarö and the perch on Saturday afrernoon. He met Queen Elizabeth II at the lunch for the queen and her husband, the Duke of Edinburgh (and more than 500 other guests) at the

Town Hall. Because on the programme that entertained the guests Jussi was also involved. An ensemble from the Radio Orchestra under Sixten Ehrling and the KFUM Choir under Martin Lidstam performed an all-Swedish programme – including Uti vår hage sung in English. And as grande finale Jussi sang the only ‘exotic’ number: Celeste Aida, and Land, du välsignade. In Dagens Nyheter the following day one could read that after the lunch “Queen Elizabeth entertained herself for quite a while, paying lavish compliments, with Jussi Björling, who told her that he had flown over from the USA hastily to be in time for the lunch. He was also informed by Philip that the two had met during the Helsinki Olympics.”

The credibility concerning the flight has to be questioned, however. Three days earlier Jussi had been singing at Skansen, and he would hardly have travelled back and forth across the Atlantic in the meantime. I think the journalist was talking through his hat this time. On the contrary Jussi flew to Rome only next week for a new recording project. This time it was Rigoletto, which was set down between 14 and 28 June at the Rome Opera House with the Romanian Jonel Perlea* as conductor. In the main roles, besides Jussi as the Count, was his old friend Robert Merrill in the title role, and his former wife Roberta Peters as Rigoletto’s daughter Gilda.  Rome can be terribly hot in June and there was no air conditioning in the opera house. Whether this afflicted the sound technicians or the recording equipment is hard to know, but there is a lot of distortion on the master tapes. Moreover there is an unusual lot of background noise – perhaps also as a result of the heat. It is interesting to learn that the days after the complete recording both Merrill and Peters recorded separate arias and there the sound quality is much better. Maybe there was a low pressure that cooled down Rome in the beginning of July. 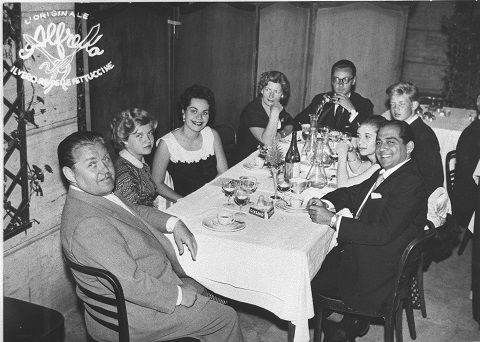 The reviews of the complete recordings were mixed. Philip Hope-Wallace in Gramophone wrote “under Perlea, the orchestral playing is firm and dramatic, well balanced with the voice. The music is well paced. Björling’s tone is a constant pleasure. He sings elegantly. Merrill, too, is in fine voice: he sings the title role in correct and often impressive style”. Of Roberta Peters he commented “she is a capable rather than an appealing Gilda”. Overall, Hope-Wallace summed up as “in short, this RCA performance with Metropolitan stars offers an able, and therefore enjoyable performance of the opera”. He did, however, highlight the many cuts in the score. Other reviewers also criticised the cuts and the sound quality. Merrill was generally prized, while Jussi was criticised for not nuancing enough. Most of his singing was too loud, they meant. 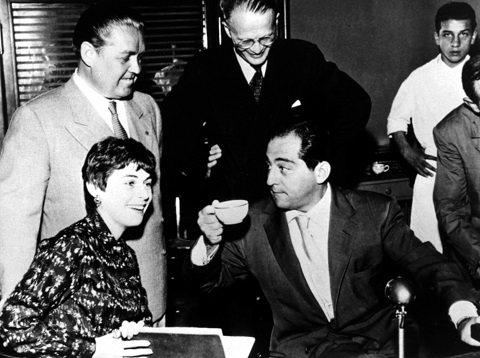 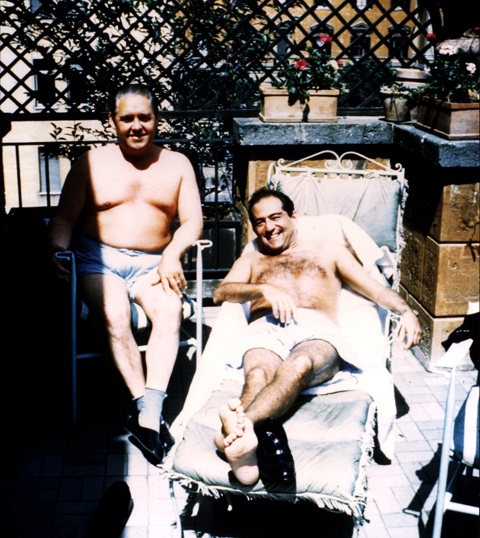 Jussi and Robert Merrill sunbathing at Grand Hotel during the recording

In this connection I can’t refrain from quoting a few lines from the American Jussi lover Stephen M. Stroff’s biography Guldstrupen (The Golden Throat). It was never issued in America, only in Sweden, and many facts are wrong. He says for instance that the recording in Rome took place in September. He also writes: “Conductor was Jonel Perlea, an efficient and experienced conductor who made a fine Aïda the previous year with Björling. Then everything went excellently, but in Rigoletto Perlea wanted a lighter more springy style than Björling could provide in 1956. Jussi, who never used to call attention to his own good points, took the conductor’s instructions as a personal insult and in the end refused to cooperate. The quarrel culminated during the first take of the quartet Bella figlia dell’amore.

Ensembles always imply balance problems for sound technicians and conductors. Jussi, who had sung the role innumerable times, began his long solo that opens the quartet instinctively. He had earlier sung with Merrill but not in this particular role, and he knew Roberta Peters’ voice … The first take was therefore unusually successful. But Perlea wasn’t satisfied. He wanted more sotto voce. The tenor bristled up. ‘This is my SOLO’, he said, as though he explained to a child. ‘I sing as I feel’. Perlea was stubborn. ‘You have to sing as it says in the music’, he said. ‘Softly’. During the next take Jussi whispered his part. Perlea was red from fury, but RCA settled the fight to Björling’s advantage. The first take was issued.

But the unpleasant atmosphere spoiled what was intended as a relaxed recording. The tense, expressionless playing of the actors caused a totally unenjoyable Rigoletto. As for Björling the fight with Perlea had made him so bitter that he, as soon as the ensemble scenes were finished, flew back to Stockholm, in spite of RCA’s protests and recorded his solo numbers to the pre-recorded tape with the orchestra, to avoid the disputes with the conductor.”

The truth in this has probably to be taken with a large pinch of salt. I have not been able to find any evidence in the literature I have searched. 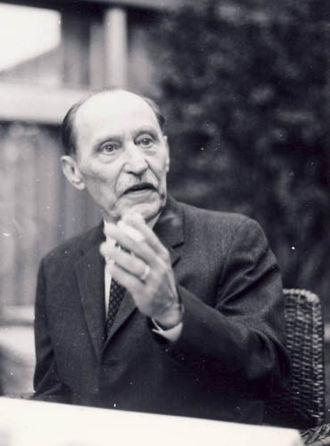 Jonel Perlea (1900 – 1970) was primarily known as an opera conductor. Until 1944 he mainly conducted at the Bucharest Opera but guest-conducted also in Vienna, Stuttgart, Berlin and Paris. In 1944 he and his wife were captured in Vienna on their way to Paris and were under house arrest – according to some sources in the concentration camp Mariapfarr – until the end of the war. After the war he conducted mostly in Italy, primarily at La Scala in Milan. The 1949-50 season he was guest conductor at the Metropolitan Opera in New York. He also taught at The Manhattan School of Music from 1952 to 1969. In 1957 he was stricken by a heart attack and a stroke, and after that learnt to conduct with only the left arm. He recorded three operas with Jussi Björling, all three in Rome: Manon Lescaut (1954), Aïda (1955) and Rigoletto (1956). Moreover he led a famous recording of Donizetti’s Lucrezia Borgia (1966) with Montserrat Caballé in the title role.