Jussi of the Month October 2019 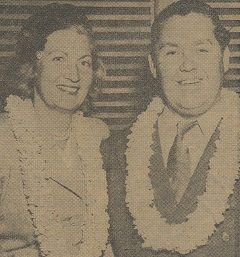 The autumn of 1949 Jussi spent mainly on the American west coast and as early as the end of August he headed for Los Angeles and an outdoor concert in the gigantic Hollywood Bowl, which seats around 25,000 listeners. This time his wife Anna-Lisa accompanied him and they made several appearances together, including a concert in Honolulu on Hawaii. In the press the couple was portrayed with flower garlands around their necks. In due time, towards the end of September, Jussi also took part in the season premiere at the San Francisco Opera, where he sang in Tosca opposite Elisabetta Barbato and Lawrence Tibbett and in La bohème opposite Licia Albanese. 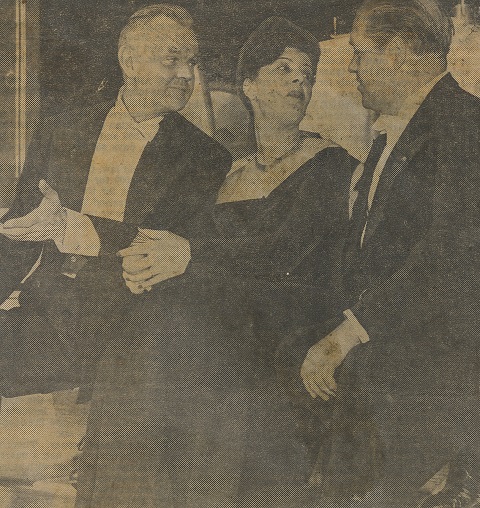 In San Francisco – and to some extent Los Angeles – he remained during the rest of October and sang, besides two Faust with Florence Quartararo as Marguerite, three performances of Manon Lescaut with Licia Albanese in the title role. With her he some years later (1954) did the well-known recording on RCA and also some performances at the Metropolitan in 1956, one of them recorded and issued on CD, moreover recently revitalised soundwise. These performances in San Francisco were in other words made almost two months before the better-known premiere at the Metropolitan, which also has been issued on CD. Before the end of the month Jussi and Anna-Lisa also took part in the radio programme Standard Hour from the San Francisco Opera. 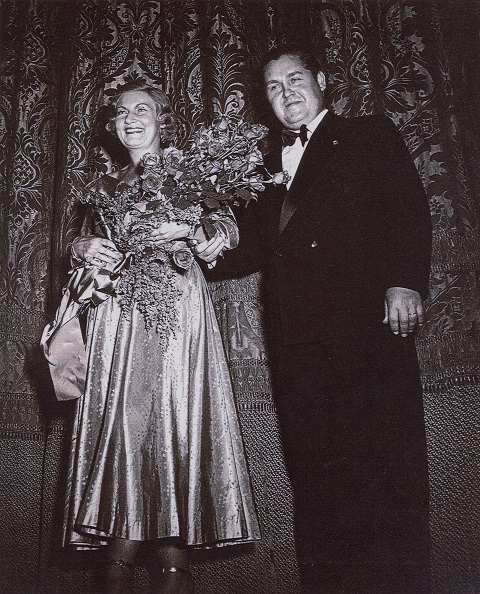 Anna-Lisa and Jussi after radio broadcasting from San Francisco Opera

But let’s return to Faust. Alexander Fried from San Francisco Examiner went to the first of the performances and made an analysis of Jussi’s achievements: “Needless to say, the best of Björling’s singing had a stirring mastery and splendour … In the ‘Garden Scene’ he became discriminating and lyrical, without loss of power. Probably there is not another tenor in the world who can sing the difficult ‘Salut demeure’ more cleanly and attractively than he did, or with so pure and ringing a high C.” His colleague in San Francisco Chronicle, Alfred Frankenstein, was no less positive: “Björling stands for one of the most powerful and beautiful tones that has ever issued from a tenor’s throat and for a past master’s knowledge of musical style. He has the heroic tenor’s reserves and the lyric tenor’s ease; above everything he has perfect taste in music-making. We are therefore greatly privileged to hear him often during the current season.”

The first performance of Manon Lescaut on 7 October aroused rejoicing from the reviewer in San Francisco Chronicle, not least because they mounted the opera at all, which hadn’t been seen in San Francisco for a lot of years. To be sure he didn’t appreciate all of the libretto. He complained that in the midst of the opera it changes character. The first two acts are mainly comic while the remaining two are mainly tragic and in particular the fourth act where practically nothing happens besides the heroine’s “prolonged death”, but continues: “… when you have said all that Manon Lescaut remains one of the most completely enchanting operas in the repertoire, and its very deviation from the stagewise norm of its composer’s later works only add to its charm and savor … it’s the work of a youthful, lyric Puccini whose invention is completely fresh and who could write page after page of light, bell-colored music that hovers over the edge of operetta.

Nothing lags and nothing falls in interest. Major episodes and incidentals are equally significant and equally rich in musical creativity, but if I had to choose any part of the work as especially beautiful, I should single out, on the basis of this first exposure, Manon’s death-music and the ‘madrigal’ sung for her entertainment in the second act”. He hails Albanese as “probably the world’s greatest interpreter of pathetic, lyric roles like Manon Lescaut, because she is a magnificent musician and has a voice of the most affecting color; above everything she is a past mistress of the arts of restraint, understatement and suggestion which make the difference between a great artist and just another opera singer.

Jussi Björling’s tremendous vocalism, virility and musicianship had been the subject of verbal rhapsodies in these columns on the occasion of each of his previous appearances. This tune, in addition to singing as he always does, he managed to discover some histrionic resources he had never shown before. His Des Grieux was not altogether the same as his Rodolfo, Mario or Faust; he seemed at least partly aware of the fact that an 18th century nobleman does not carry himself in precisely the same fashion as a 19th century Bohemian poet.”

Marie Hicks Davidson in San Francisco Call-Bulletin was also overwhelmed: “Licia Albanese surpassed herself last night in the Puccini score. Her voice was made by the gods of music for just this role. Her soprano was lusciously sparkling in the early scenes and poignantly appealing as the abandoned Manon in the later episodes. She was young, slender, piquant and beautiful.

Jussi Björling’s portrayal of the Chevalier Des Grieux, who caused all the mischief, literally could not have been improved upon. It was vocally thrilling and histrionically convincing. His ‘Donna non vidi mai’ was lustily cheered.”

Alexander Fried’s review in San Francisco Examiner has not been preserved, but he couldn’t resist the temptation to see the performance again when it was given as matinée on 16 October. From that review it is obvious that the premiere was “full of excellent details, but it took time to jell”. But the second performance appealed all the more to him. The conductor Fausto Cleva had more go in the orchestra and now everything worked. Albanese’s portrayal of Manon was more convincing and Jussi Björling was a magnificent Des Grieux.

On 23 October Jussi and Anna-Lisa appeared on the 1176th Standard Hour together with the San Francisco Opera Orchestra under Gaetano Merola. After Rossini’s overture to Semiramide they sang the final scene from the first act of La bohème. After that the beautiful intermezzo from Goyescas by Granados, gave Jussi a suitable rest before he came back and sang ‘Ah! Fuyez, douce image’ from Manon Chenier. This was followed by Anna-Lisa in the waltz aria from Roméo et Juliette and then the programme was rounded off with the love duet from the same opera. I have not been able to find a review but Jussi’s arias and the duets are available in the 4-CD box “Jussi Björling Live” (WHRA-6036).

There were no reviews either from the two appearances on 28 and 29 October in Purdue University Hall of Music in Lafayette, Indiana with Frederick Schauwecker at the piano. Here the focus was almost entirely on Jussi. The first part was all his own with Handel’s ‘Largo’, two songs each by Schubert and Richard Strauss and ‘Ah! Fuyez’ from Manon. After the interval he sang the Flower Song and ‘Goodbye’ by Gabrilowitch and two songs by Rachmaninov: ‘Lilacs’ and ‘In the silence of the night’. Then Anna-Lisa was allowed to appear with her husband in ‘O soave fanciulla’ and the duet from Roméo et Juliette. 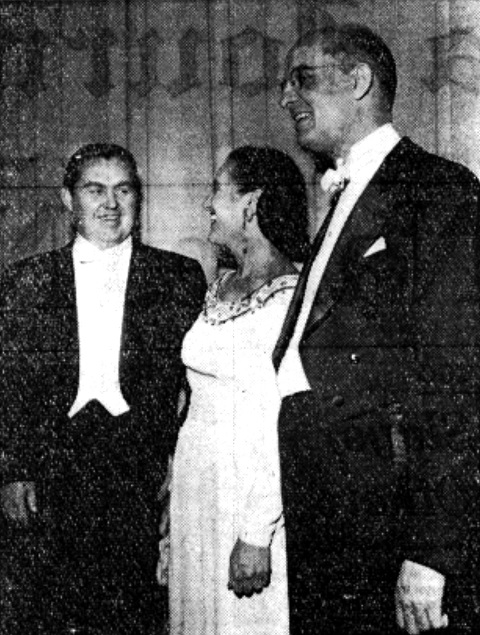 Jussi, Mrs Elmer and Frederick Schauwecker in Peoria
Two days later, on 1 November, Jussi sang, again with Schauwecker at the piano, in Shrine Mosque in Peoria in Illinois the same programme as in Lafayette minus the duets but as finale he added ‘Come un bel dì di maggio’. This time the local papers were there – and were impressed: “It has been many months since the city has heard a voice so thoroughly satisfying and of such unusual calibre”, wrote Theo Powell Smith in Peoria Journal, while Evabeth Miller in

Peoria Star expressed herself: “In a dramatic tenor of robustly heroic quality, which improved almost visibly after considerable restraint in the two opening numbers, the artist thrilled the large audience …” The final number, from Andrea Chenier she described: The maestoso grandeur of its finale has tremendous impact. But that wasn’t all.” There followed no less than six encores, which were crowned by Tosti’s ‘Ideale’, “so surpassingly well done that anything more would have spoilt its whole effect.”