Jussi of the Month September 2020

During the war years Jussi was mainly confined to his home country, but that didn’t imply that he was inactive. On the contrary he was in great demand, both as concert singer and as guest at the Stockholm Opera. Certain period he was also field artist, singing for the soldiers. Besides that there were still opportunities to appear in Europe, although in limited extent. 1942 was such a year, which will be elucidated in this article.

Spring and summer of 1942, he was almost overburdened with engagements all around Sweden, from 20 May at Furuvik to the finale at Tivoli at Gröna Lund on 27 August. Before the latter the press could report: “135 000 people have heard Jussi Björling so far during this year’s summer tour – how much this figure will increase tonight is uncertain, but that there will be several thousand can be taken for granted, since Jussi tonight sings once again at Tivoli, and one can count on the same success as last time, when the whole space was filled with people and outright southern hat-throwing scenes took place after the concert. Tonight is moreover the last opportunity for a long time to hear our great singer. After the concert Jussi Björling will take a good rest in the archipelago and in September he goes to Copenhagen and after a couple of guest appearances at the Opera in Stockholm he goes to Budapest and Vienna.” 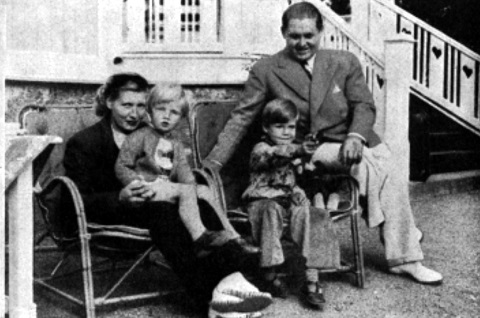 He had guested Copenhagen every year since 1931, but then at concerts at Tivoli. In 1933 he had however appeared at the Royal Theatre in two performances, Prince Igor (5 May) and Don Giovanni (6 May) during a guest appearance from the Stockholm Opera. Now it was the world tenor Jussi Björling who was engaged as guest soloist in three performances. The first, on Thursday 17 September, was sold out since a long time. The tickets were sold in ten minutes, according to Dagens Nyheter. 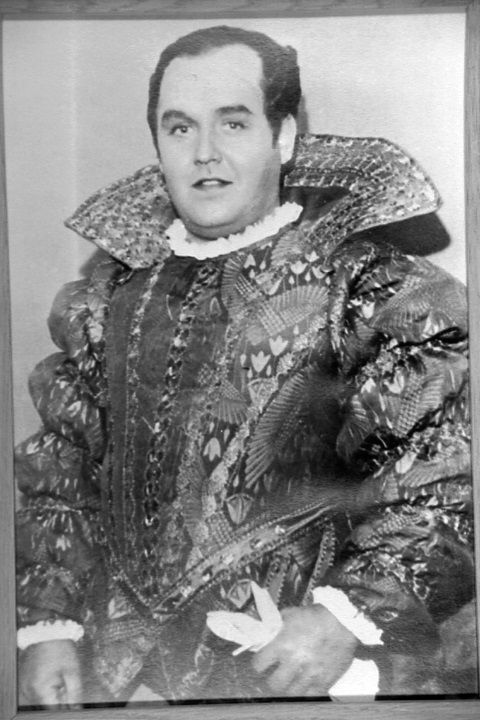 The Duke 17 September 1942
Jussi appeared as the Duke of Mantua in Rigoletto, conductor was legendary Egisto Tango, Italian by birth and active both at La Scala in Milan and at the Metropolitan Opera in New York, before he was permanently engaged at the Copenhagen Opera. Jussi sang opposite Henry Skjaer (Rigoletto), Ebba Wilton (Gilda) and Einar Nørby (Sparafucile). Of those bass-baritone Einar Nørby is fairly well-known through some excellent recordings, but more as father to the actress Ghita Nørby, who is well-known also in Sweden.

Writer Henry H. in an unnamed Danish newspaper, was dissatisfied with most of what took place on the stage this evening – and also in the audience. Listen: “At last we were granted here in Copenhagen to hear Jussi Björling with the round baby-face as seducer, the lecherous Duke of Mantua. Sold out at double prices and the audience so lofty that they hardly bothered clap their hands… Björling, who is used to ovations, thus looked somewhat disoriented. Not even after “La donna è mobile”, which evokes exultations all over the world – in particular when it is sung as beautifully as last night – there was no more than a few isolated claps, and in the stalls people kept their hands in their lap. They pulled themselves together after the quartet, but then the acclamation could just as much have concerned Else Brems (Maddalena). After the performance there naturally followed the customary curtain calls and Kammersanger Poul Wiedemann, in tails, handed over to the guest an elegant bouquet of red and white carnations, but by and large the Copenhageners were not enthusiastic, and that superiority was to a high degree inappropriate, since Jussi Björling is a world artist, and if he is good enough for the Metropolitan Opera in New York, one should also be able to show him courteousness at Kongens Nytorv (the square in front of the opera house.

To the defence of the audience one has to admit that the performance wasn’t on the same level as the quality of the guest. One is somewhat ashamed that the premiere stage in Scandinavia was unable to offer the international tenor a worthier setting. The playing of the orchestra under the direction of Egisto Tango was very good – not even at La Scala in Milan one can hear the short prelude played with more nuances and greater feeling – but on the stage poverty reigned, both in voices and outfit. More modest sets haven’t been seen for a long time and the dramatic thrill was destroyed … the Italian language with its beauty is an important part of the music. The words in an opera of this kind are of course indifferent, as long as they sound musical. Maybe the guest was disheartened by the reception not being warmer, in any case he held back a bit with his vocal splendour. Dramatically he was simple with his expressive means, more discreet than one imagines a Duke of Mantua, but he did it excellently. His reading of the big aria in the third act, which (as opposed to “La donna è mobile”) doesn’t belong to the popular numbers, but in reality is much more interesting, was extremely beautiful. Here the seducer opened his heart.

Rigoletto is an opera about hearts. Red and black! The music has actually only these two colours. But Heavens! How lovely it is and extravagantly melodious!”

So negative to the setting were not the other papers and J.B. stated that overall the performance belonged to the best at the Opera!

H.S. in Politiken was totally enthusiastic by Jussi’s singing: “More beautiful it can’t be – and if it can it is on another planet.” And he elaborated his enthusiasm: “Nature has bewitched this divinely gifted throat. Now, as before, there is only one thing to say: he has got everything. Every note he sings is free from imperfections. And the voice is his, he does with it whatever he wants. It has the power, when he feels for it, and he can, when it suits him, spin it to the thinnest thread of tone. Pliant as a blade, in every situation and every nuance. Clarity, purity, transparency, everything it has in profusion, and altogether it has the marvellous sweetish euphony that only one in our time can match: Gigli! Which of the two who is the most enchanting … will certainly not be clarified.”

Kai Flor in Berlingske Tidende also expressed himself lyrically, but like his colleagues he also reacted to the audience’s lack of enthusiasm. Strangely enough the Swedish reporters interpreted matters differently. “Cascades of acclamation” was the header in Stockholmstidningen. 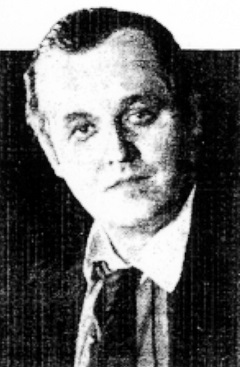 Rodolfo 19 September 1942
Two days later, 19 September, La bohème was on the agenda. In the pit Johan Hye-Knudsen reigned, previously cellist in the orchestra who later advanced to the position as deputy conductor. On the stage were again Henry Skjaer (Marcello), Einar Nørby (Colline) and Poul Wiedemann, who had advanced from flower-boy to Schaunard. On the distaff side was Karin Rundsberg (Musette) and Edith Oldrup Pedersen (Mimì). The latter also had Swedish connections; she later married Sigurd Björling and settled in Helsingborg, where she worked as music teacher and also appeared at the Drottningholm Court Theatre. She was also the one in the cast who received the highest praise – next to Jussi of course. One of the reviewers downright sighed of rapture: “How this voice has developed in strength and beauty the last few years. Mimì has never been better sung at the Royal Opera!”

Contrary to the reserved reactions of the Rigoletto-audience the enthusiasm was this night enormous. “It seemed that the theatre wanted to rehabilitate the Swedish guest. In Rigoletto there was no one who stopped Jussi from singing. Last night he sometimes wasn’t able to make himself heard. After ‘Saa kold den lille hand er’ thunderous applause literary hailed over him!” Jussi wanted to continue but the audience continued the ovations for several minutes and the performance almost came to a standstill.

“Jussi Björling’s singing deserved the ovations. With his brilliant pliable voice he carried through the part (in Italian) with the most gorgeous vocal art – not in accordance with some tenors’ bellowing manners, on the contrary all the time with sensitivity and restraint, which endowed the part a greater nobility than one often experience in this opera. This successful stylishness also to some extent covered up for the weak acting.”

The reprise of Rigoletto on Sunday night was also a great success: “… it was a stormy farewell. The house was sold out and it would be unfair to say that the audience was moderate as at the first performance. After each of the Duke’s arias there were prolonged volleys of applause. After La donna è mobile the action stopped for several minutes, they wanted to hear the song again, and Tango asked pantomimic up to the stage whether he should reprise it. But Björling shook his head. The audience continued clapping. The Duke bowed and bowed and finally he raised his glass with Chianti and saluted the audience, whereupon he emptied it while the onlookers laughed loudly. Rarely has there reigned such great rapture at the Royal Theatre, but rarely has a guest sung more beautifully.”

Naturally it was a satisfied Jussi who travelled back to Stockholm, 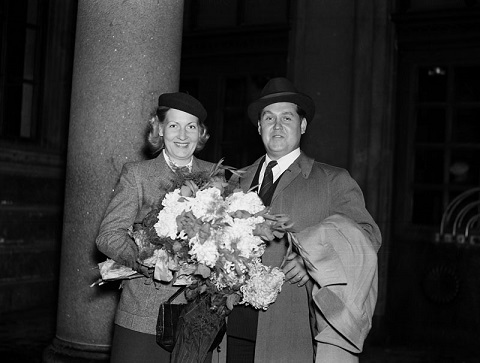 The return at Stockholm 21 September

where he a few days later rounded off September with two performances at the Opera of Roméo et Juliette and La bohème, both together with his favourite soprano Hjördis Schymberg. Then he went, in due time, to Budapest and Vienna, where he also was met with thunderous ovations – but that is another story.