Notes on the new issue of Roméo et Juliette 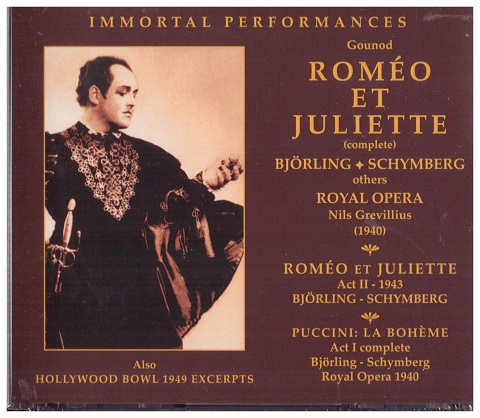 You should own Jussi’s Swedish-language Romeo. Preferably in this new edition, and you should buy it soon. Let me explain why.

Jussi was at his most audibly engaged and alive when interpreting his roles in his native Swedish, with colleagues that he had grown up with as an artist at the Stockholm Opera during the 1930s. The main proof is two complete performances from the season 1939/40: La traviata and Roméo et Juliette. He recorded neither of them commercially, but there are good live recordings of both. Of these his Romeo is the most important: one of his best parts, and one where no one else comes close to his success.

Of course, Jussi Björling was a magnificent “Italian” tenor. But his meticulous, pure style of singing was an even better fit for French opera, where feelings more often translate into nuances and demi-shades, and where beauty of sound should not disturb clear pronunciation of the words. In 1930s Stockholm there was still a tradition of French opera in Swedish, and Romeo och Julia had been performed continuously almost every year since Gounod dedicated his new opera to the King of Sweden Charles XV.

This recording has been available on Bluebell since 2001, but it now comes in refurbished sound. And this time with an additional CD which is remarkable. We get a complete extra act  of Roméo from a benefit performance in 1943 – slightly different, and fun to compare – and the complete first act of La bohème, recorded the month after the 1940 Roméo. In addition there are duets from Roméo with Jussi’s wife Anna-Lisa from Los Angeles, and meaty texts on what we hear from Stefan Johansson and others.

For Swedish readers the box arrives at a good time because many this autumn will have read Jan Hammarlund’s new book on Jussi’s Juliet and Mimì on these recordings: Hjördis Schymberg – sågverksjäntan som blev hovsångerska (“the sawmill lass who became a court singer”). In his review for a Swedish publication, Alexander Husebye ends by expressing a wish to hear this particular recording! It and the bonus CD also give an interesting cross section of Jussi’s other colleagues during his nine years as a full-time employee of the Royal Opera.

Roméo et Juliette was recorded just half a year since Jussi had left that ensemble. Now he was a Metropolitan Opera star who visited as a guest, but the recording shows better than any other what Stockholm audiences had been able to enjoy during the thirties when he was a permanent member of the company. This night he sang Roméo for the 25th time, a role he had first done at age 22 and now seven years later developed into a masterpiece.

And why buy it immediately? Well, the issue comes from an eccentric Canadian, Richard Caniell, who will be 90 in 2021. His enterprise is called Immortal Performances and if you buy it directly from there you may end up paying substantially more than the Swedish Jussi Björling Society charges, in spite of a current favourable exchange rate against the dollar. Amazon and other net merchants rarely distribute Caniell’s issues. If you have bought records from abroad you know there are costs for freight, VAT and a customs charge. JBS charges 420 SEK; private import may cost 700. And JBS Sweden’s supply at that price is limited. (NB: this article was written for Swedish readers.)

There is a cheaper alternative, but then you also have to hurry. A few copies of the old Bluebell issue are still available from JBS Sweden at only 140 SEK. The sound is noisier but otherwise not that much worse. But then you get only the 1940 Roméo on two CDs, and a brief article by Harald Henrysson. Myself I bought Caniell’s box although I already had the Bluebell one, particularly for the contents of his third CD.

Caniell has also issued Jussi’s other preserved Roméo et Juliette, in French from the Met in 1947. This is well worth having: in a larger theatre Jussi’s singing is different, maybe a bit more muscular. He seems to enjoy good chemistry also with his Juliette there, Bidù Sayao. But “Jussi and Hjördis” in Swedish, and with their first act of La bohème as a bonus – you need that, and probably won’t find it on Spotify any time soon. And even then you will miss the articles by Stefan Johansson and others.

Soon it is Christmas. How many copies should you order?

The box can be ordered from Jussi Björlingsällskapet via annicka.englund@hotmail.se or tel. +468-653 05 30. The price for members is SEK 420 plus postage.