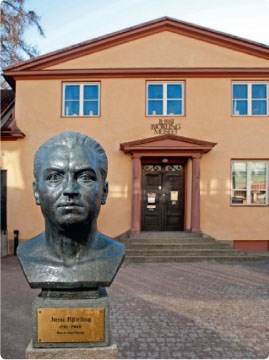 It has long been known that the City of Borlänge wanted to move the Jussi Björling Museum out of its present building, where it was opened in 1994, but plans for the future have been unclear. In April 2020, the three Jussi Björling societies, Lars and Ann-Charlotte Björling and several persons in Sweden and abroad who were active in preserving his memory through books and CDs sent a letter to the Department of Cultural and Recreational Activities, stressing the importance of the museum and asking for clarification of the city's plans.

The questions were not answered until seven months later, in a letter from the head of the department dated 23 November, and on 24 November the corresponding political board took a formal decision confirming the information. It has thus been decided that after 1 January 2021, there will not be a separate Jussi Björling museum, and the present building will be emptied. The museum will be replaced by an exhibition of selected parts of the collections, either in the municipal library or in an adjacent building. The new exhibition will not contain any of the Björling family's depositions, since Jussi's children Lars and Ann-Charlotte have reacted to the decision by demanding that all the family's depositions are returned to them as soon as possible.

No person with special competence related to the new exhibition will be hired, so the collections, probably to a large part in storage, cannot be developed or help given with search in them (it was not excluded that some acquisitions to the collections may be made, if the Björling societies assist with expertise). Probably, the library will not continue any part of the sale of CDs and souvenirs.

The museum will still be open during 16 days in December, but it is especially regrettable that restrictions due to the corona pandemic will probably prevent some of those who would like to make a last visit. Contact with the curator Jan-Olof Damberg and orders by mail (jan-olof.damberg@borlange.se) or telephone (+46 24374240) will be possible for some period after the museum is closed.

We hope that it will be possible to build up a Björling museum again in another place.