The USA tour of the Winter of 1949 Continues 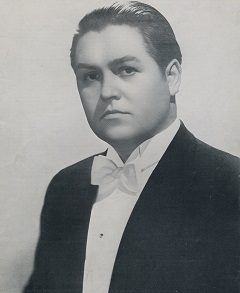 Portrait 49/50?
Let me catch up with Nils-Göran Olve’s meritorious description of the hardships of the touring life from last month’s issue of “Jussi of the Month”. As Nils-Göran points out Jussi’s “house pianist” Frederic Schauwecker was almost always at hand when Jussi was to appear in recital, but when the tour on 2 March reached Utica in the State of New York he wasn’t, for unknown reason, available. Utica is administrative centre for Oneida County and is situated in the beautiful Mohawk Valley. It is a relatively small town, today circa 60 000 inhabitants. During the 19th and 20th centuries the town was leading in the textile industry, but political corruption and organised criminality during the 20th century led to a decline and it was called “The City of Sins”. There was also a financial slump with close downs and unemployment.

Now as then the leading newspaper was Utica Observer-Dispatch and before Jussi’s visit Ellis E. Baldwin wrote “Jussi Björling is the Babe Ruth of Tenors”. George Herman “Babe” Ruth (1895 – 1948) is still regarded as possibly the greatest baseball player ever.

The recital wasn’t planned from the beginning, but Jussi had to step in for his Metropolitan colleague Leonard Warren at short notice, and that may explain why Schauwecker didn’t turn up. 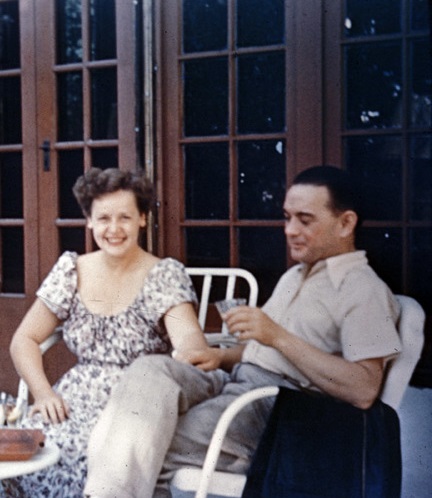 pianist James Quillian with Eleanor Steber, who sang with Jussi in the United States
Baldwin noted in his review that “James Quillian bobbed up to fill that spot, suffering from what he reported was an overdose of sunlamp. This did not affect his playing for each accompaniment was accomplished deftly.“ He continued: “The customers heard a singer who was willing to give his

voice a complete workout. They got more opera and witnessed more real hard work than any vocalist has exhibited here in some time. Music lovers who favour opera were loud in their approval.” The only weaknesses came when he sang three songs in English, Baldwin said. As usual he was generous with encores: Schubert’s Ständchen, a couple of Tosti songs, Tonerna and Because. 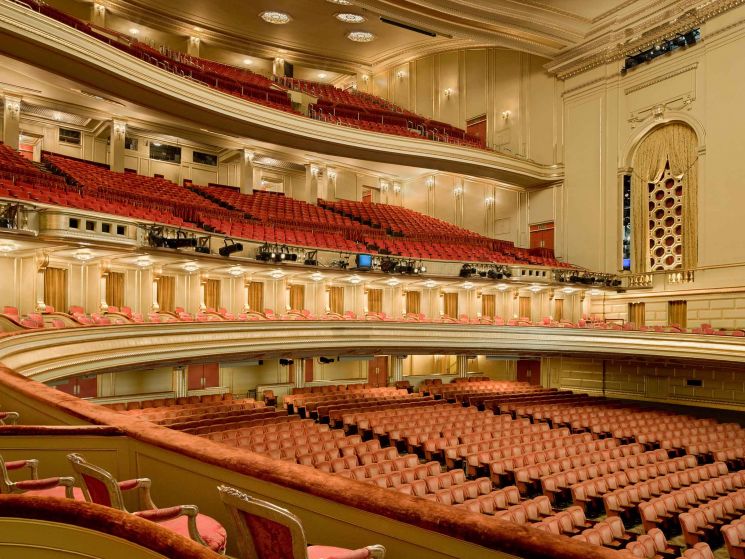 held there when the United Nations was founded. Somewhat smaller than the Metropolitan and Chicago Lyric Opera it is still an imposing building, taking 3146 sitting and 200 standing visitors – which is a lot more than the biggest European houses: Paris Opera Garnier takes 2200, Covent Garden 2268, Vienna State Opera 2280 and La Scala 2800. Unfortunately we don’t know whether it was sold out on 8 March, since there are no reviews preserved, but from the programme we know that Schauwecker wasn’t able to take part here either. His stand in was Jan Popper.

After San Francisco had a good week to recover his breath and then, on 14 March, he was back on the east coast, in Reading in Pennsylvania. It’s an old town, founded as early as 1748. Iron industry was important during the 19th century and around the turn of the century 1900 it was an important part of the growing car industry, flowering in the 1930s when the number of inhabitants had grown to almost 120 000. After that there was a slump, just as in Utica. Today the town has recovered and has a population of about 90 000.

The concert was held in Rajah Theatre, a building from around 1900, which was devastated by fire in 1921, but was rebuilt and has functioned as both cinema and entertainment stage with 1671 seats. Innumerable well known artists have appeared there, for instance Ella Fitzgerald and Nat “King” Cole. Today the theatre is part of a larger complex, Santander Performing Art Center.

Reading Eagle covered the concert and now Schauwecker was back in service, but the reporter said that he was “possibly somewhat two forceful at points”. He added: “We wish, incidentally, that someone would invent an automatic page turner. The danger of scores careening down on the piano keys is definitely distracting.” He was also impressed of five encores. In Reading this was something of a rarity.

Next stop was Detroit in Michigan, another city with a long history. The first building was erected 1701 but it wasn’t until 1815 that it officially was named town. In the 20th century it became the capital of the car industry. Henry Ford started his industry in 1903 and the other two giants, General Motors and Chrysler followed suit. The town grew quickly and in 1949 there were 1.85 million inhabitants and Detroit was the fifth biggest city in USA. But in the 1970s there was a crisis due to competition from, mainly, Japan. Today the town is filled with deserted buildings, criminality is high and one third of the population suffer from poverty. The number of inhabitants is less than half the number in 1949. At that time the local music life was budding, first and foremost within blues, R&B and jazz and stars like Stevie Wonder, Diana Ross and The Supremes and Aretha Franklin became world stars – and the record company Motown Records was formed. In classical music Detroit Symphony was important since the late 19th century. By 1949 the orchestra was in decline but from the early 1950s it grew to one of the great orchestras under conductors like Paul Paray, Sixten Ehrling and Antal Dorati. And there was no shortage of spacious concert venues. Masonic Temple Theatre (4404), Detroit Opera House (2765), Fisher Theatre (2089) and Orchestra Hall (2286) were the biggest. But Jussi gave his two recitals on 18 and 19 March in a more intimate venue: Detroit Institute of Arts, one of the foremost art museums in USA with more than 65 000 works, primarily by American artists but also some old European masters. Detroit News’ headline read “Near-Swoons Great Tenor at Institute” and the review said: “His voice is robust and emotional and clearly produced and he sings much more like an Italian in pursuit of the belcanto than a blond, blue-eyed native of the cold stern norths”.

Detroit is situated close to the Canadian border and on the other side of the border is Quebec, which is the next largest province in Canada, with an area three times larger than Sweden’s, but Quebec is also the name of the capital of the province. The majority of the inhabitants in the province are French speaking and the city of Quebec is the most important cultural centre of the French speaking Canada. The town is very old. It was founded in 1608 and is the only North-American town north of Mexico with preserved town wall. Since 1985 the City centre is on Unesco’s World Heritage List.

The concert on 23 March was held in the beautiful Théâtre Capitole. As a whole Quebec is regarded as Canada’s most beautiful town and it should, according by a travel agency be explored by foot. Whether Jussi got the time for a walk is uncertain. At the end of March it is still cold in Quebec – and lots of snow, and Jussi had a new concert in Baltimore two days later, but he could at least appreciate the article in the newspaper Le Soleil, where he was compared to his idol Caruso.

Baltimore was the last appearance but one in March and he had a long journey from Quebec so he hopefully had time to inform himself about Baltimore. It is the biggest town in the State of Maryland with about half a million inhabitants. 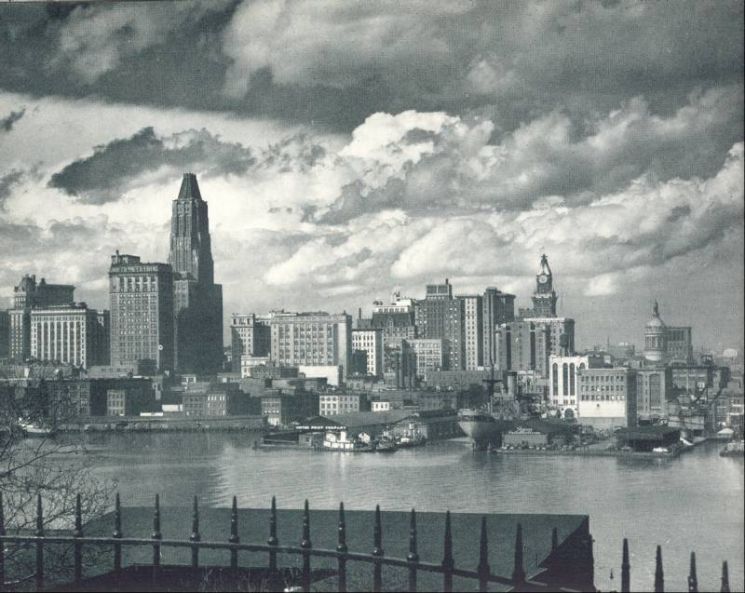 Well-known names from the town are Edgar Allan Poe, Babe Ruth (mentioned earlier in this article) and jazz-singer Billie Holiday. Today’s readers will also know Frank Zappa and minimalist composer Philip Glass. The concert was held in Lyric Theatre, a venue that was inaugurated 1895 with a concert with The Boston Symphony Orchestra and legendary Australian soprano Nellie Melba. That concert was a sell-out but when Jussi entered the stage on 25 March there were relatively few listeners. But, as the reporter from Baltimore Sun wrote: “Almost everything the singer did was greeted with eruptions of shouts, whistles, and bravos, which at times reached almost deafening proportions.”

After these praises he steered northwards again, to Boston. There, on 29 March, he joined his colleagues from the Metropolitan, who were on tour. Wiuth Jussi as Manrico, Stella Roman as Leonora, Margaret Harshaw as Azucena, Francesco Valentino as Count Luna and Jerome Hines as Ferrando and with veteran Emil Cooper as conductor, they enchanted the Bostonians with a glowing Il trovatore. Warren Storey Smith was lyrical in Boston Post: “Giulio Gatti Casazza [former manager of the Metropolitan Opera] used to say ‘Give me a tenor and I don’t need any scenery’. In last night’s Il trovatore at the Opera House his successor, Edward Johnson, provided an outstanding tenor, Jussi Björling, and handsome scenery to boot.” Christian Science Monitor added more praise: “No better vehicle could have been chosen for the dramatic tenor’s Boston debut.”

After this success Jussi had a few further appearances in the beginning of April, but then he took a substantial, and well-deserved holiday for more than two months before Gröna Lund and Skansen waited back home in Stockholm.