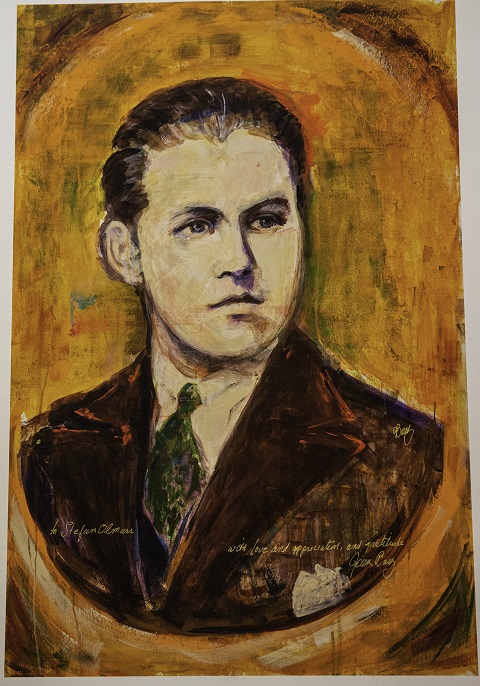 Portrait of Jussi by Joan Baez
I have written about Joan Baez before in the magazine, but I still take it from the beginning.

It started with my buying a ticket for her concert at Cirkus in November 2009. I had heard from JBS USA that she liked Jussi and contacted her homepage and her assistant to get a chance to come backstage and talk to her after the concert. With that they had my phone number. She was to sing on a Tuesday. On Sunday her assistant called me and asked if I could take him and Joan to Jussi’s museum and grave. I thought this would happen on Wednesday, after she had been singing. But no, tomorrow Monday, he said. And the museum was closed Mondays in November. But Harald was willing to help and I fixed train tickets and we went away. I told them that I hadn’t mentioned the trip to media, in case she wanted to have it privately. None from media would be allowed to come to the grave, but they were welcome to come the last half-hour at the museum, she said. To give the museum some PR. It was fine moment at the grave, where she lit a candle we had brought.

It was fortunate thet there were no other visitors at the museum and Harald made a good showing of the museum. She was asked which song she liked the most by Jussi and she answered: “Tonerna. I don’t understand what he is singing, since it is in Swedish. But I feel the tears in his voice.”

Newspapers, radio and SVT came and talked with her. When she left they lit spotlights towards her and she went and kissed Jussi’s metal bust outside the museum. “He was cold”, she said.

On Tuesday it was sold out at Cirkus and I was the only one who was invited to see her backstage. I got some CDs and she asked if she could have a Jussi sweater, similar to the one I was wearing, for herself and her mother, who was the one who had pointed out Jussi’s greatness to her. I sent them as a Christmas present. 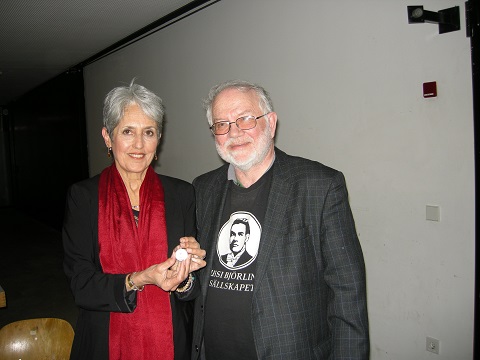 Joan Baez receives a medal from Stefan Olmårs
In 2010 I was on a journey to Switzerland to visit customers and found that she was to sing in southern Germany when I was in the vicinity. I was accompanied by Lennart Eng, who is the accompanist at all the Jussi festivals in Hälsingland. Both of us were invited backstage and

Lennart took a photo when I decorated Joan Baez with our silver medal as a token of her having been elected Honorary Member. Besides Lennart and myself there was only an offspring to Montezuma (Aztecan ruler) invited backstage. He was in Europe to try to get back a Royal crown from a museum.

2011 I was backstage with her in Linköping and also a year or so at Skeppsholmen. Then I brought items from the Joe Hill Museum in Gävle to her. She has sung the ballade about Joe Hill on all the concerts with her I’ve heard. I was also accompanied by Jan Hammarlund at Skeppsholmen – he who wrote the book about Hjördis Schymberg.

Before her farewell tour I was invited backstage at the Stockholm Waterfront. I had with me Pelle Jansson who took photos of me and Joan and Izzy Young who was backstage with his daughter.

On all the encounters with Joan I have brought her the latest CDs with Jussi.

Before Christmas 2020 and her 80th birthday in January 2021 I sent her Harald’s book about David and the Björling boy’s journey in USA.

I got a mail from Joan where she told me she had had an art exhibition in California with portraits of people who had been important for her. It was evident from comments of her assistant, who was with her on the trip to Borlänge in 2009, that Joan there had one of her greatest experiences on all her world tours.

Joan had made a portrait of Jussi and wrote that she had made two prints of the portrait and wanted to send one to me and asked who else she should send the other one to in Sweden. Harald, who guided her in the museum, I said and gave her all the information about Harald. 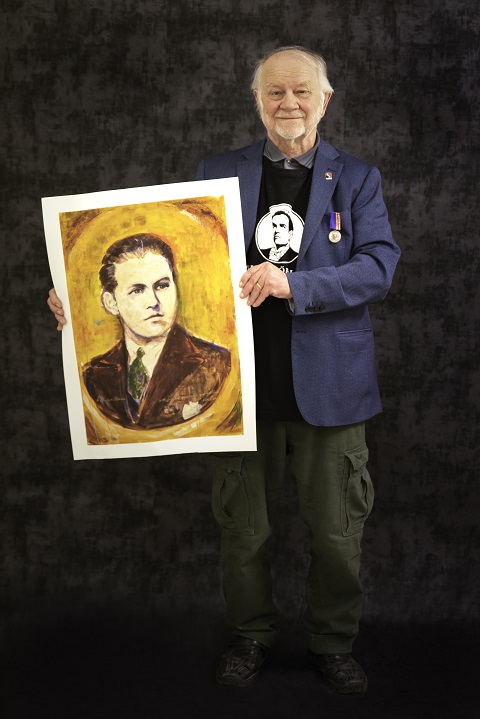 Suddenly one Friday I got a letter from Postnord with a reminder that I had a parcel at the post office in Ljusdal. And if I didn’t collect it at the latest on Tuesday next week it would be returned. I hadn’t got a notification about a parcel and hurried the 30 kilometres to the post office and collected the parcel. It contained a print sized about 50 x 70 cm of her portrait of Jussi and at the bottom of the print she had written “To Stefan Olmars with love and appreciation and gratitude. Joan Baez”.

Harald Henrysson also got, after some time of uncertain waiting the same print with a similar text. Though not via Postnord but another distributor, fortunately.

The photo of the portrait is taken by Maria Brunkes.