In late May 1951 Jussi sang in six performances of Un ballo in maschera at La Scala in Milan, surrounded by prominent Italian colleagues like soprano Maria Caniglia, mezzo-soprano Cloe Elmo and baritones Paolo Silveri and Carlo Tagliabue. The last performance was on 2 June and after that he went home to get ready for his next assignment: to take part in the first Sibelius Week in Helsinki, a tradition that lasted until 1965. Jussi was to appear at the penultimate concert, 0n 20 June, and when he arrived in Helsinki there was a telegram in his room at Hotel Kämp: The brilliant mastersinger is welcome to to visit Jean Sibelius.

“Sibelius often sent telegrams after Jussi’s concerts in Finland to thank him for the way he interpreted his music”, writes Anna-Lisa Björling in her and Andrew Farkas’ book Jussi, and continues: “Somrthing in Jussi’s singing, something deep inside him, made one feel that this was the way Sibelius’ songs should be performed. Jussi pristinely expressed the light and purity, strength and beauty of Nordic nature, as if Sibelius’ music and Jussi’s singing sprang from the same source of inspiration. Such attributes can never be learned or acquired – either they are there or they are not. With Jussi they were there.”

The aged composer had turned 85 half a year earlier and was in frail health. Many were the admirers who wanted to visit him but he turned down most of them. Only to exceptionally few selected the doors were opened. The Helsinki correspondent of Swedish Stockholms-Tidningen managed to get an interview with Jussi and gave a graphic description of the course of events:

“Jussi and his wife immediately got a taxi, the former armed with a box of exquisite Havana cigars, which consul-general Sven Salén had asked Jussi to pack up to be forwarded. Mrs Anna-Lisa brought a giant bouquet of roses to the hostess of Ainola, Mrs Aino Sibelius.” 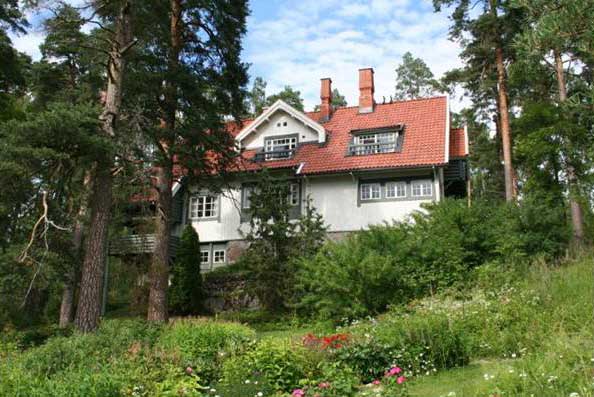 Ainola mansion on Tusby träsk in Järvenpää, just north of Helsinki, had been the home of the Sibelius family since 1904, and after Jean Sibelius’ demise in 1957 his wife lived there until her death in 1969. In order to preserve the house in its original shape the Sibelius daughters sold Ainola to the Finnish State in 1972 and in 1974 it was opened as a museum.

In Jussi Anna-Lisa gives a touching description of the visit: “I still remember the home’s simplicity, the sunshine falling over the broad, freshly scrubbed floor boards, and Sibelius’ warmth and cordiality as he received us. His mere presence made a powerful impression. I can still see the old man’s hands, violently trembling as he toasted us with champagne; he used a giant glass, so that he wouldn’t spill his drink. When we were ready to leave, Sibelius gave Jussi an inscribed photograph To the genius, the great singer Jussi Björling, with gratitude, Jean Sibelius. Jussi was deeply moved to receive such a tribute from such a man. He admired Sibelius enormously, and this dedication meant more to him than all the orders and honors he had received. The framed photograph still stands in a permanent place of pride on the piano at our home.”

On this occasion Jussi also conveyed compliments from Toscanini to “Sibelius, the great master”.

In the evening Jussi sang in the auditorium of the University with the Finnish Radio Orchestra, conducted by Nils-Eric Fougstedt. Othe orchestra played three movements from Uuno Klami’s Kalevala Suite and Jussi sang four songs by Sibelius. Several reviewers complained about the inferior acoustics but praised the performances. In Hufvudstadsbladet S. P-n. wrote:

“Mastersinger Jussi Björling didn’t have the opportunity this time to develop all the resources of his marvellous voice, but the four well-known and popular Sibelius songs were interpreted sensitively and unaffectedly – in particular I remember his accomplished legato in Var det en dröm. There were, of course, intense ovations, resulting in a reprise of Svarta rosor.”

The other two songs were Flickan kom ifrån sin älsklings möte and Säv, säv, susa. The concert was broadcast by Finnish Radio (YLE) but was not officially recorded. However Henrik Christiernin, a freelance at the music department of Finnish Radio did it privately. They had recently got their first tape recorders and Christiernin recorded Jussi’s songs on thrown-away used tapes. Then he forgot everything and only 40 years later he happened to find the tapes, unlabelled and in very bad shape. He got help to restore them and in 2012 they were issued, in surprisingly good sound, on a Bluebell CD. This information is culled from Harald Henrysson’s commentary in the CD booklet. It should be mentioned that the encore was never recorded.

Two recordings from that occasion:

Nils-Eric Fougstedt (1910 – 1961) was conductor and composer. He studied at the Helsinki conservatory and was employed at the Finnish Radio in 1938. There he founded what was to be the Finnish Radio Choir. In 1944 he first conducted the Finnish Radio Orchestra and was their chief-conductor in 1950, a position he held until his death. 1946 – 1950 he was also conductor of the male chorus Akademiska Sångföreningen in Helsinki. As a composer he is arguably best known for choral music but he also wrote orchestral music, including “Angoscia” (1954), the first Finnish twelve-tone composition. As film music composer he wrote, among other things, a well-known Romance from Katarina och Greven av Munksnäs (1942). 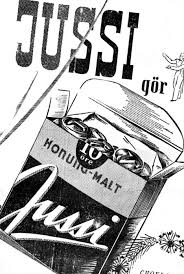