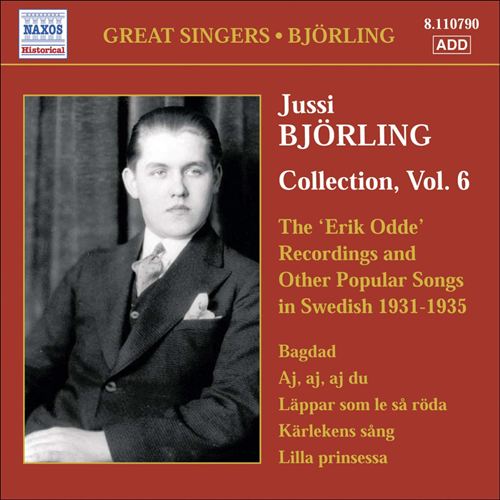 IN HIS AUTOBIOGRAPHY Med bagaget i strupen (My Throat is my Luggage), published in 1945, Jussi wrote:

“Maybe I dare reveal a secret after all these years. There was once a jazz-singer – whispering – named Erik Odde who became rather popular. He sang popular songs by Fred Winter accompanied by Hans Bingaln’s jazz orchestra. But Erik Odde disappeared as gramophone singer – nobody knew where to. It was he who wrote this book.”

Of the titles Jussi recorded between January 1932 and October 1933, 12 were issued under the pseudonym “Erik Odde”. On these records Jussi only employs his half-voice, sometimes singing falsetto, like other crooners of the period. Erik Odde was, as they used to say at the time, vocalist. It was dance music, where the orchestra was in focus and the vocalist merely appeared as a guest.

The records were issued, like those he issued under his real name during the same period, by HMV (His Master’s Voice) with the plum-coloured labels. Besides the much earlier Columbia records, the Erik Odde sides belong to the rarest of his recordings.

It should be mentioned that there are some mistakes in the quotation from Jussi. Hanns Bingang was the name of the bandleader and he only participated on three of the twelve Erik Odde songs. There was no Fred Winter song among them, on the other hand he conducted a couple of them. There were also orchestras conducted by Håkan von Eichwald and Folke Andersson involved.

Jussi also recorded popular songs under his real name, mostly with an orchestra under Nils Grevillius.

The whole Erik Odde repertoire with the twelve recordings is on CD, Jussi Björling Collection, Vol. 6, Naxos 8.110790, and can be ordered from the Jussi Björling Shop.